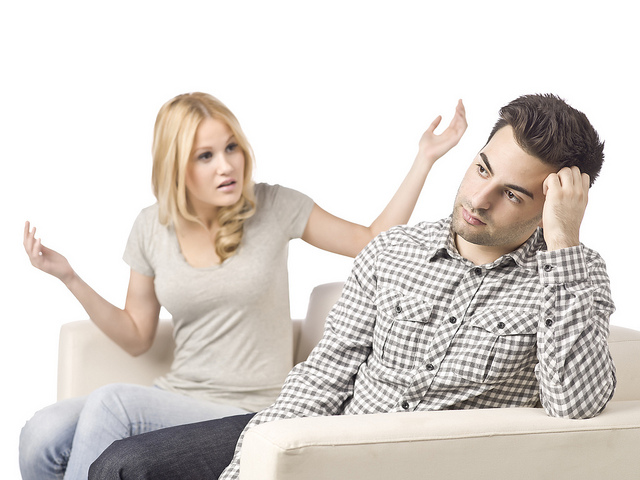 15 things about women that annoy men

Previously I wrote about what men want, based on my observations of them after being exposed to a male-dominated industry for the past seven years across the automotive, motorsport, sports photography and mixed martial arts scenes.

This is another set of observations I realised, about the things women do that annoy men. Some men have higher tolerance levels than others, so what you find irritating may be bearable for others. Also, these are generalisations and are a represent of the entire female population.

Here are the 15 things I often hear men speak of women – how many are you guilty of, ladies? :p

1) Girls often use reverse psychology and not say what they mean. Confusing!

If you want him to accompany you for the event, just say you want him to. Don’t go saying “If you’re tired you can go home and rest.” in hope that he will say “Oh no it’s ok, I will go with you no matter how tired I am.” He will just go home.

If you’re not comfortable with him meeting someone, then just state your concerns. Don’t say, “Yeah just go ahead, I’m OK, really.” in hope that they will get the hint and change their minds, nope they won’t.

Girls tend to say the opposite of what they mean, but guys are typically straightforward and will just take what you say as is.

2) Girls enjoy gossiping about people and things that don’t concern them. Bitchy!

Guys cannot understand why girls have so many comments on things that don’t affect them. If it doesn’t concern them, especially if they don’t know the people you are talking about, guys usually show little or no interest in talking about them or giving any opinions. For example, he doesn’t care if Mr X slept with Ms Y as long as Ms Y isn’t his girlfriend, sister or mother.

At the end of the day especially, when guys get off work after a long day, they usually are not in a mood to talk, thus they remain quiet. Girls start chatting about their day and guys will listen but not offer much comment. This doesn’t mean that something is wrong or they are angry at you, so don’t go screaming at them and asking why they are being cold to you. They just want to chill.

4) Girls are forever on a diet and complaining they are fat (even when they are not).

We hear this way too often – “I’m on a diet”, “I want to go on a diet”, “I shouldn’t be eating so much”, “Why do I look so fat?” Guys appreciate it when girls can sit down with them and enjoy a good meal together, instead of having to watch the girls estimate calories and pick the healthiest thing on the menu. Worse is when girls order their food, but pick at it and eat very little.

5) Girls tend to compare themselves to others, especially physically.

Criticisms are quick to fly when girls see other girls; for example, “Whoa her thighs are damn big” or “Wah her stomach isn’t flat and she dare to wear until like that”. Pure compliments of other girls are usually rare, especially if the target of comment is pretty or hot. Instead, words of dismay follow: “Her legs are super nice, why are mine so fat?”, “Her boobs are so big, too bad I’m so flat!”

6) Girls have trouble deciding on what they want.

Often enough, guys face the problem of having to deal with the indecisiveness that girls have. They cannot decide what they want to eat, which dress they want to buy or where they want to go. But when guys make the decision for them, they end up getting scolded or being asked to be more patient and let them decide.

7) Girls take too long to get ready, sometimes.

Because guys can get ready with a snap of the fingers, girls in comparison take longer to get ready. However, some girls really take too long to get dressed sometimes; for example, needing an hour to put on make-up just to go down to the coffee shop to eat because they cannot risk meeting someone bare-faced.

8) Girls can get too emotional and cry easily over anything.

Scientifically, girls are made more emotional than guys, so it’s only natural that they tend to over-invest emotions into certain matters. Some guys though, have no patience for girls who cry too easily and may even get frustrated that girls tap on their soft-heartedness by crying.

9) Girls are petty and fussy, with a penchant for picking on the little things and not let go. Why bear grudges!

Paying attention to detail is a good trait to have, but nit-picking is another matter altogether. Guys are more easy-going and they are able to put things down quicker. However, because women are more emotional creatures, they tend to pick on little things and hold grudges for a long time to come.

10) Girls often use PMS as an excuse.

That dreaded time of the month is what I absolutely detest. I feel more irritable, I feel bloated, I’m retaining water, I get moody and more fatigued than usual. It’s a horrible thing to through each month but it’s not anything I can change. But some girls use the PMS as their convenient cover – screaming and arguing, or demanding for things, then blaming this behaviour on PMS.

It’s just dinner with a close female friend, not a date. Stop letting your imagination run wild and think that there’s something going on. Also, you misplaced your wallet or your car keys – ok relax. Panicking and screaming will not bring your wallet to you; just cool down and think calmly.

12) Girls worry about the smallest things.

Yes, taking care of the small things can help the big picture, but there is no need to over-worry and fill your head with “What ifs?”. For example, nobody is going to notice that you have a big zit on your chin. Even if they do, so what? Don’t they get pimples too?

Girls get worked up easily when others try to tell them about their flaws with the good intention of helping them. Or, guys can be talking about someone else when girls jump in and say, “I’m not like that ok!” Yeah, he wasn’t referring to you, chill.

14) Girls can be fake and like to keep ‘frenemies’.

Girls complain about people behind their back, yet pretend to be friendly in front of them, or still keep someone as a friend even though they don’t like that person (thus the term ‘frenemies’). If you don’t like the person, just stop talking to him/her instead of complaining more and more about them.

Lazy to shower for example! Guys can shower very quickly and thus they hop into the shower multiple times a day. Girls on the other hand have a tendency to delay showering, mainly because it’s so troublesome to wash our hair!

*Please take this with a touch of humour. This article is in no way intended to degrade or demean women.