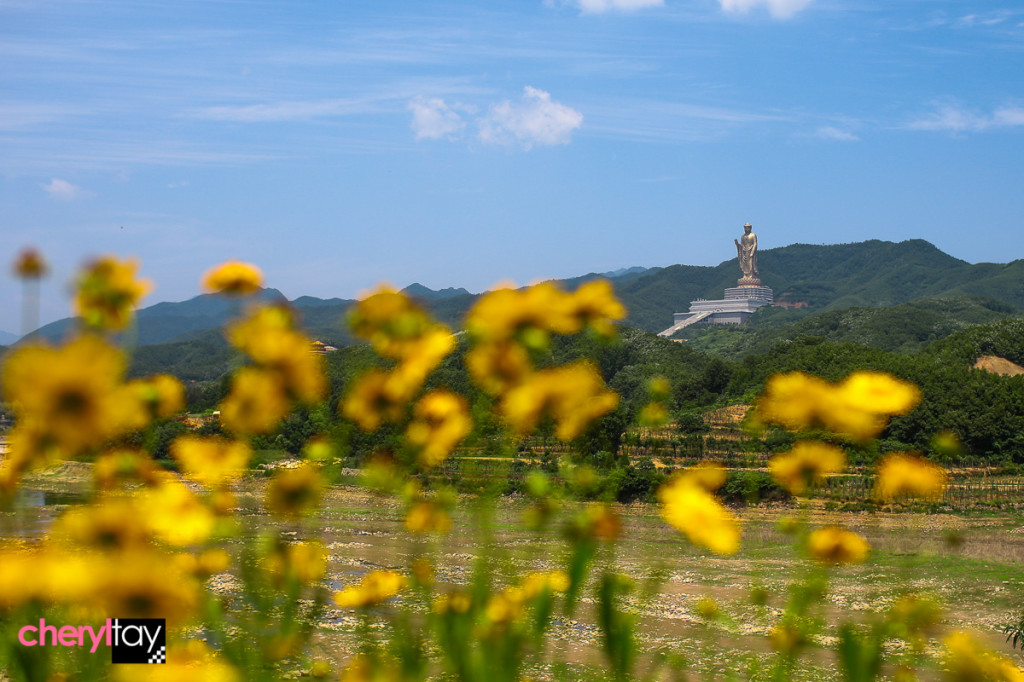 [HENAN, CHINA] Climb to the tallest statue in the world – the Spring Temple Buddha (中原大佛)

Standing tall in Zhaocun town of Lushan in Henan, China is the 208-metre tall Spring Temple Buddha that took nine years to build (from 1997 to 2008). The height of 208 metres includes the lotus pedestal and building it stands on. 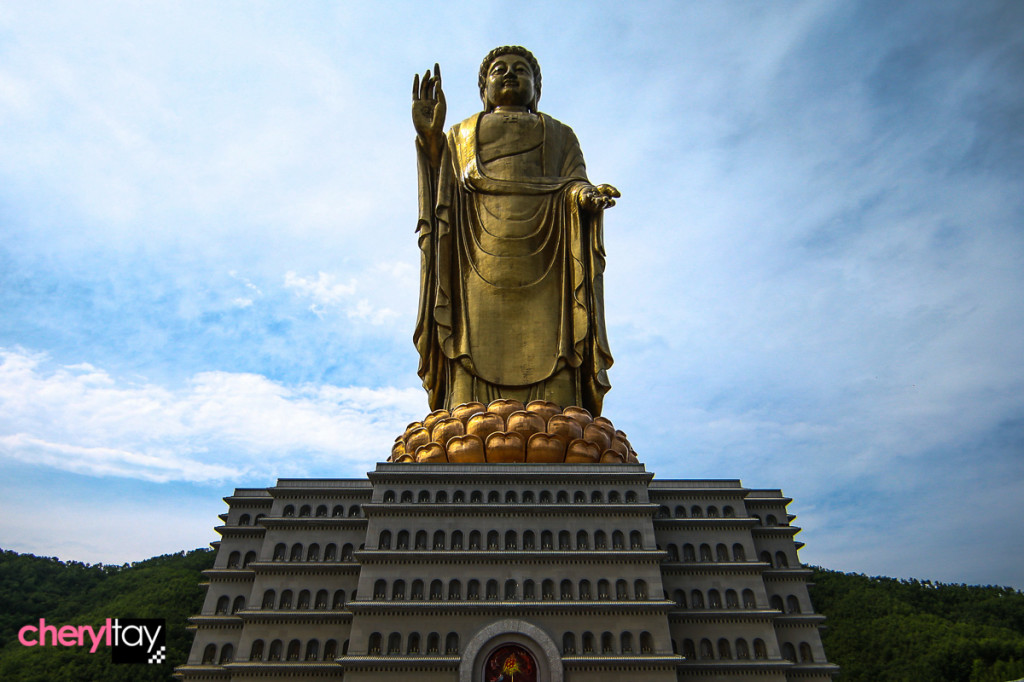 Tucked away in a quiet countryside far from the bustling shopping districts, this statue is made of 1,100 pieces of copper cast, with a total weight of 1,000 tonnes. 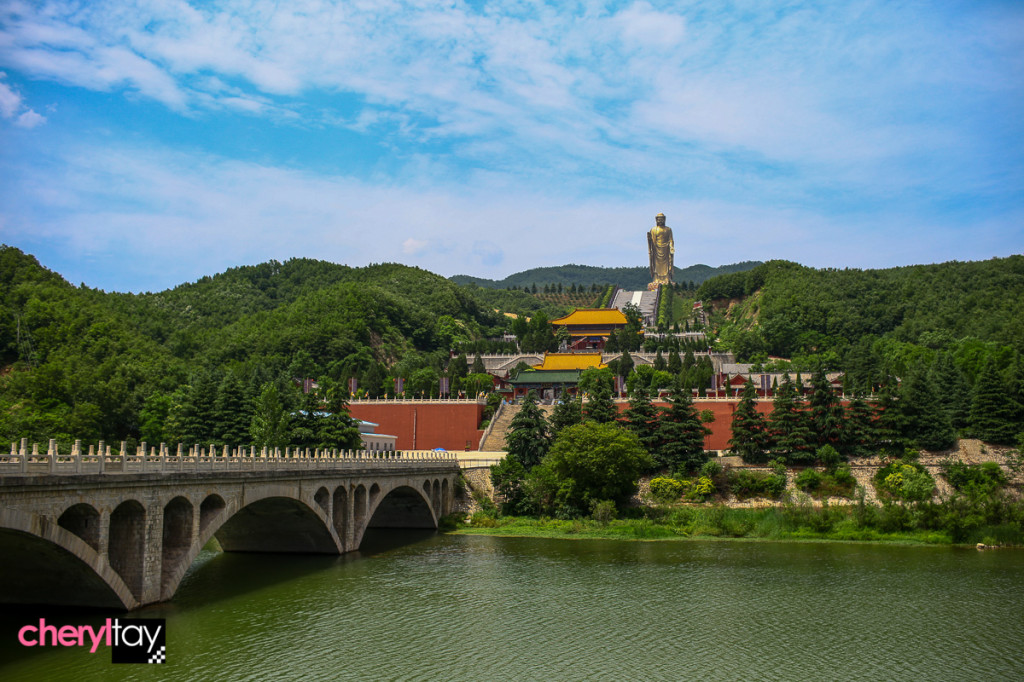 A Buddhist monastery sits beneath the statue and you can stop to offer joss sticks or say some prayers. I’m a free thinker but I felt it was only appropriate for me to pay respects. 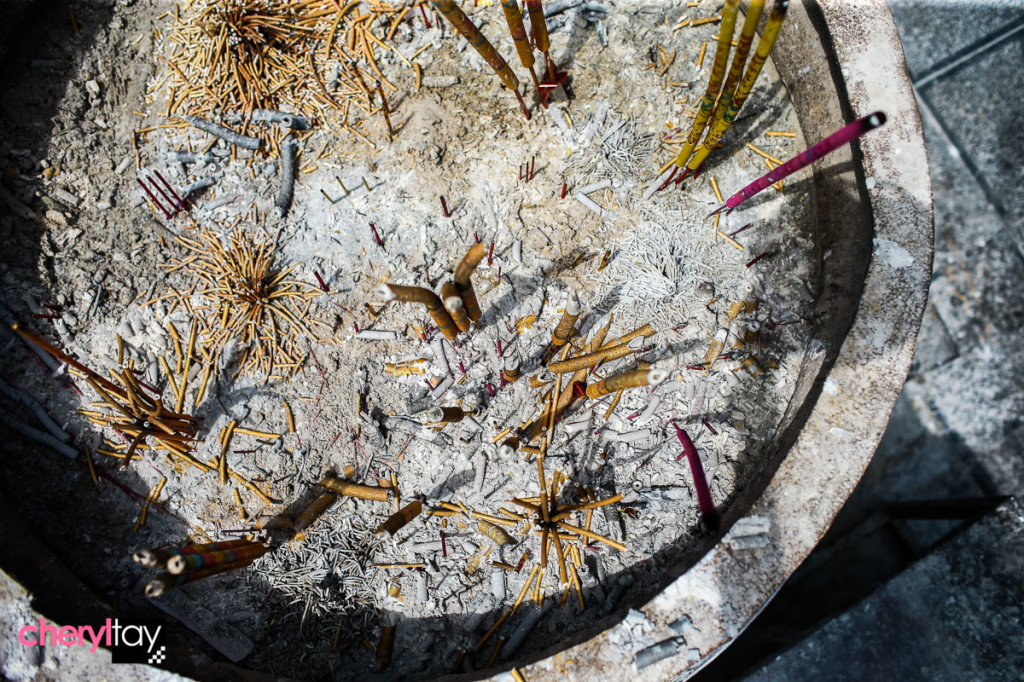 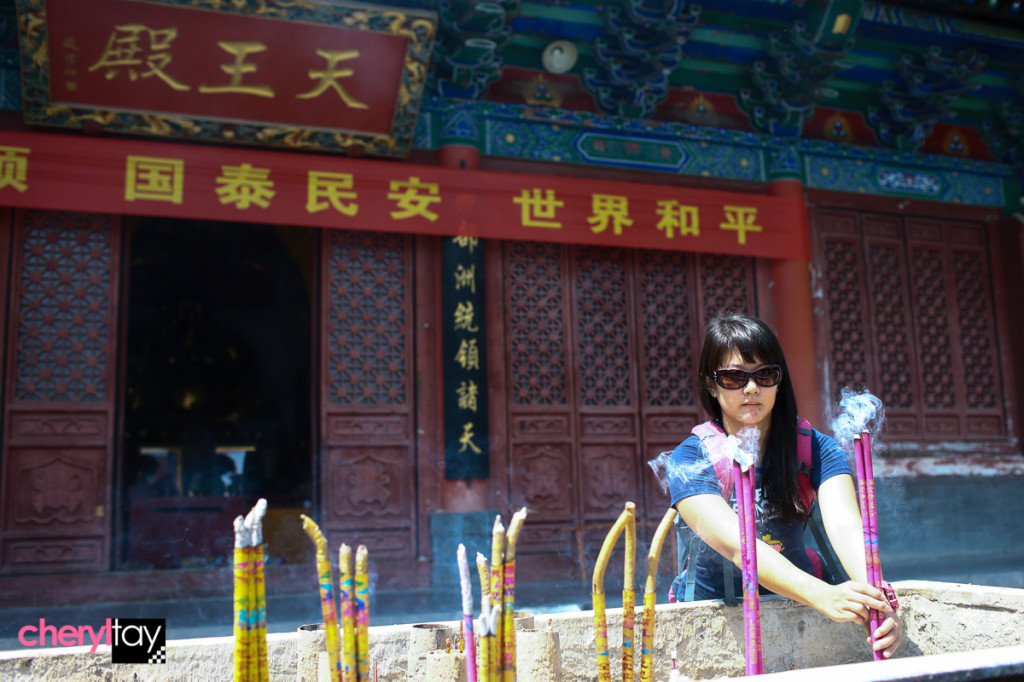 Be prepared to climb a lot of steps when you make your way out here. To get to the top, I had to climb over 1,200 steps. (See the little pink creature below? That’s me!) 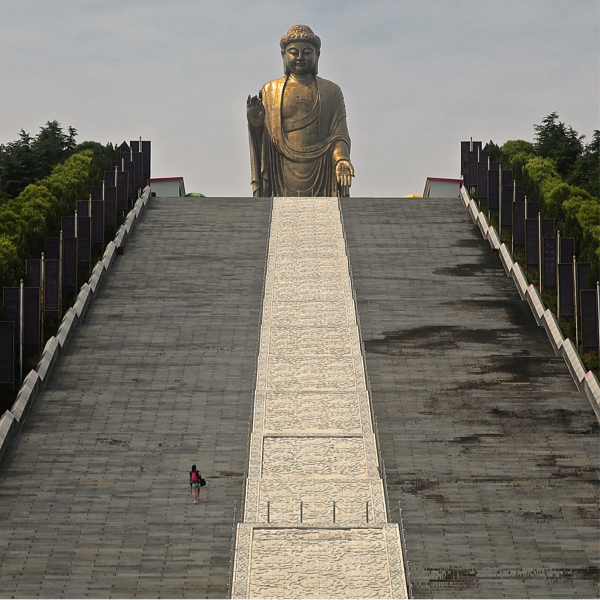 Halfway up you can take a shuttle bus to the top but I decided to take the stairs instead. Because the flight of stairs seem to go on forever, it can get psychologically challenging so just sing to yourself or count the steps. 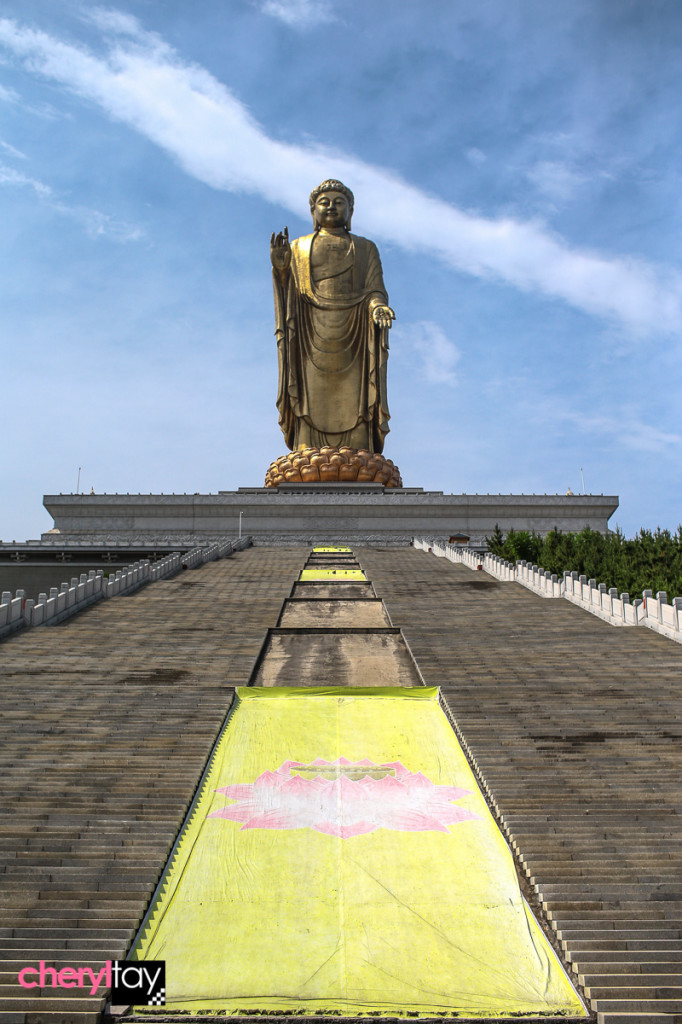 After the last flight of stairs, you have to purchase another ticket to enter the building and take the lift to get to the foot of the statue. 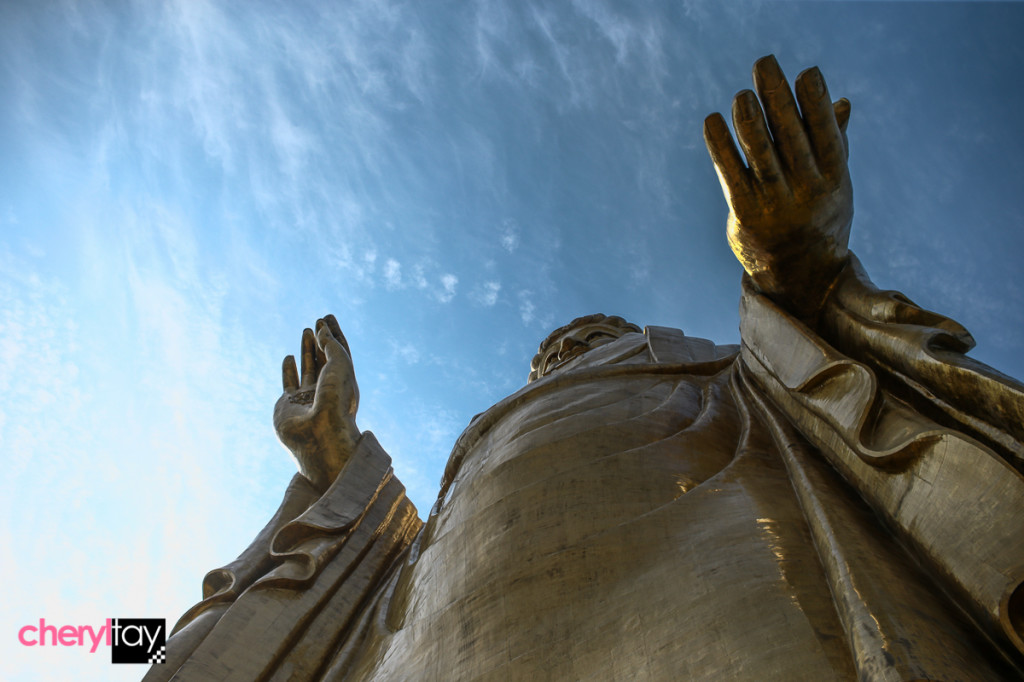 This is as far up as you can go and you’re only allowed to hug the foot of Buddha (抱佛脚). In Chinese there is a phrase that we shouldn’t ‘hug Buddha’s leg at the last minute’; that is, don’t leave things to the last minute and hope for the best! 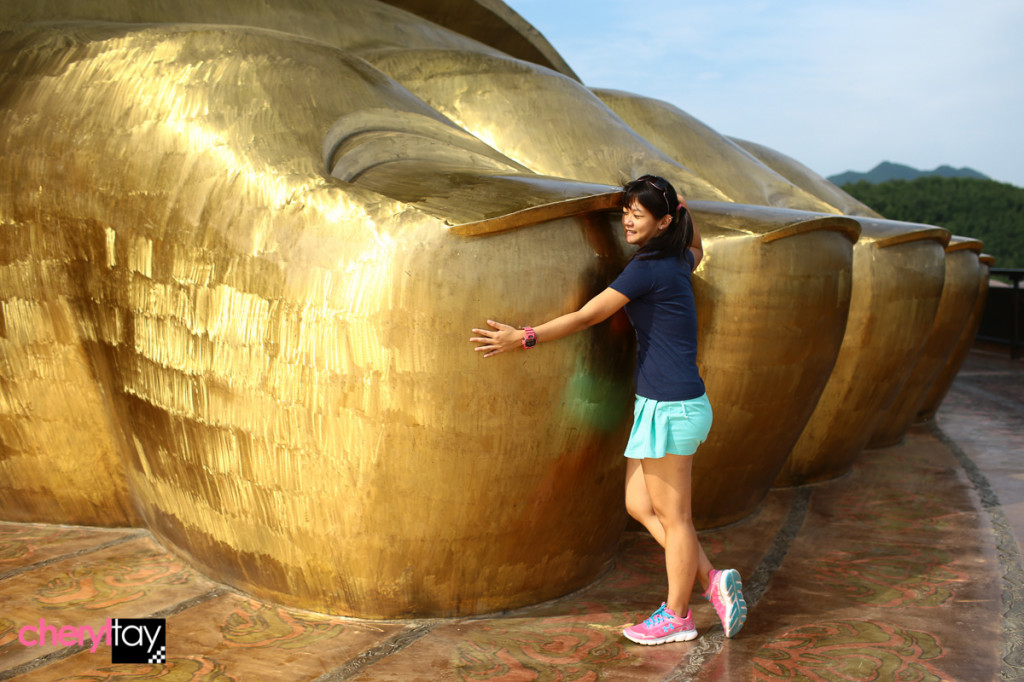 The Spring Temple Buddha statue is located in the Mount Yao (formerly named Shirenshan) vicinity, which is known for its hot springs, spectacular mountain views and of course, worshipping the majestic Buddha. 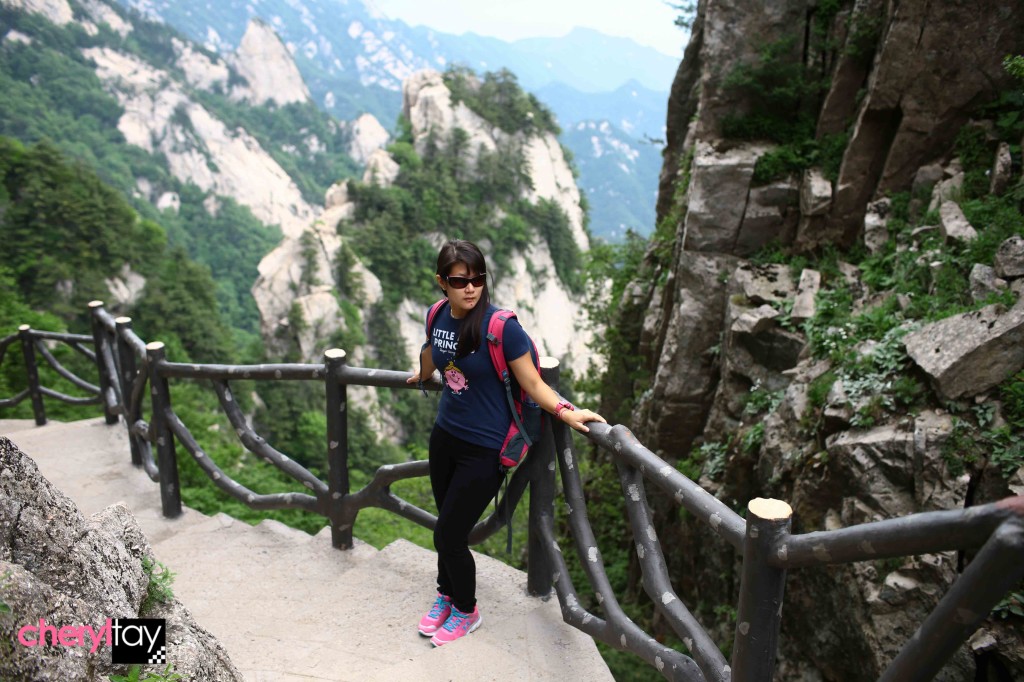 Here, the mountains rise steeply like walls and are represented by tall rocky peaks, precipitous cliffs and deep valleys. When you look out in the distance, there are almost 100 peaks that pierce through the clouds to give a magnificent landscape. 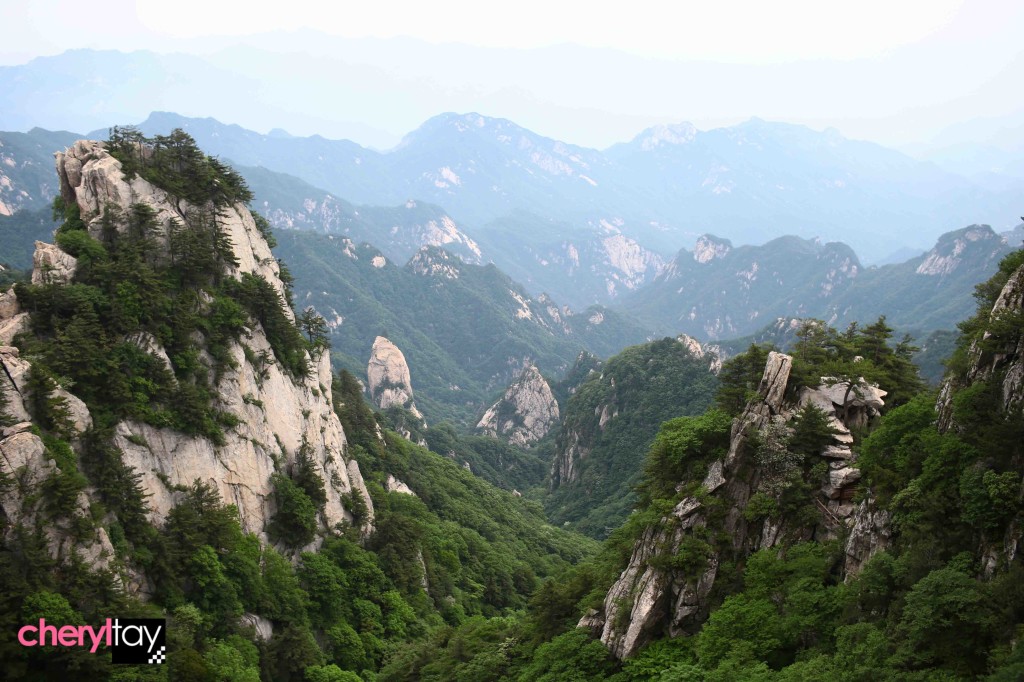 Tourists usually flock to Mount Yao for its river rafting but this activity is closed in the summer as there isn’t enough water in the river!

What most people do in the summertime at Mount Yao is to climb to the top – to the Yuhuang Peak, which is 2,153 metres above sea level. The trek up is 2,000 metres long, zigzagging through the mountain, but you can take a cable car to the halfway point. 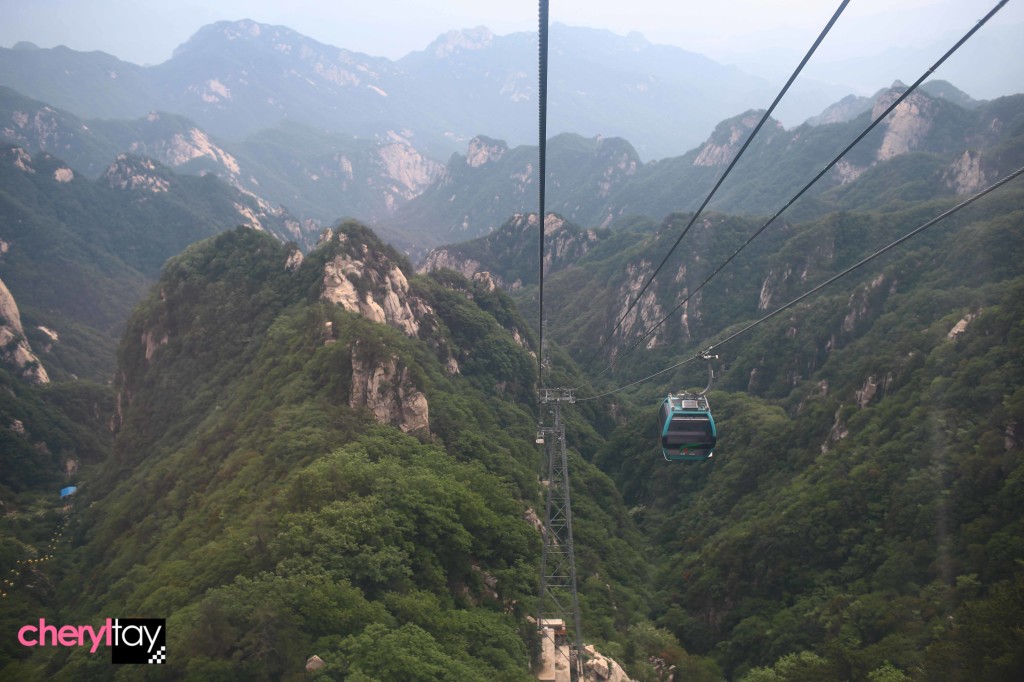 There are several rest points along the climb up where drinks and snacks are sold, so you can catch your breath. The views along the way are very pretty and I kept stopping to take photos. 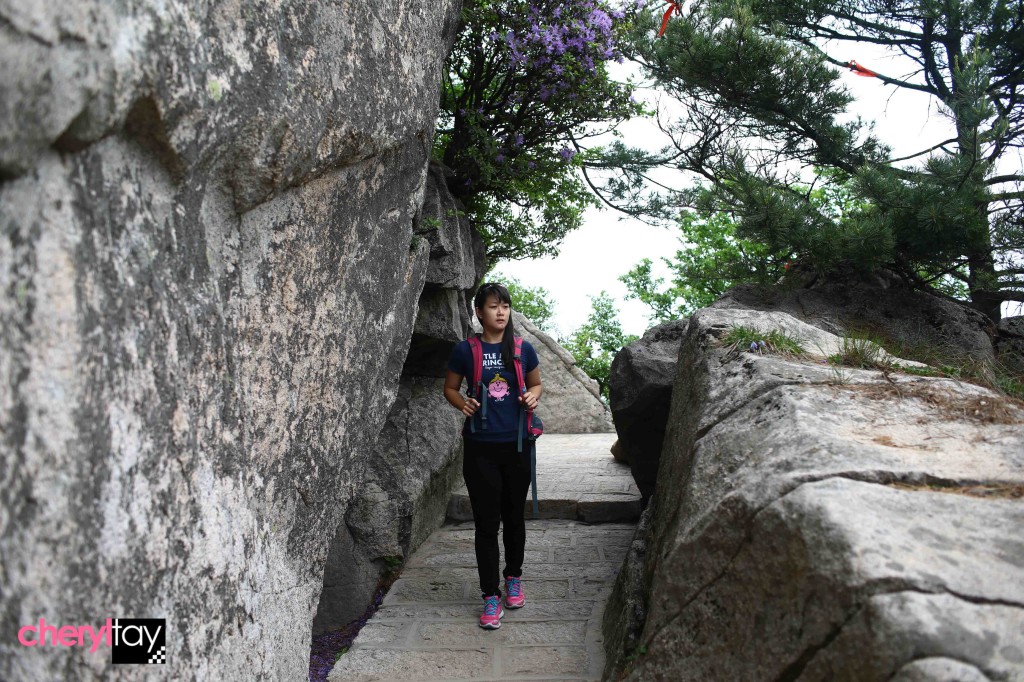 However, once you get to the highest peak at Yuhuang Peak, it will prove a daunting task to get a photo of yourself without anyone else in the photo! 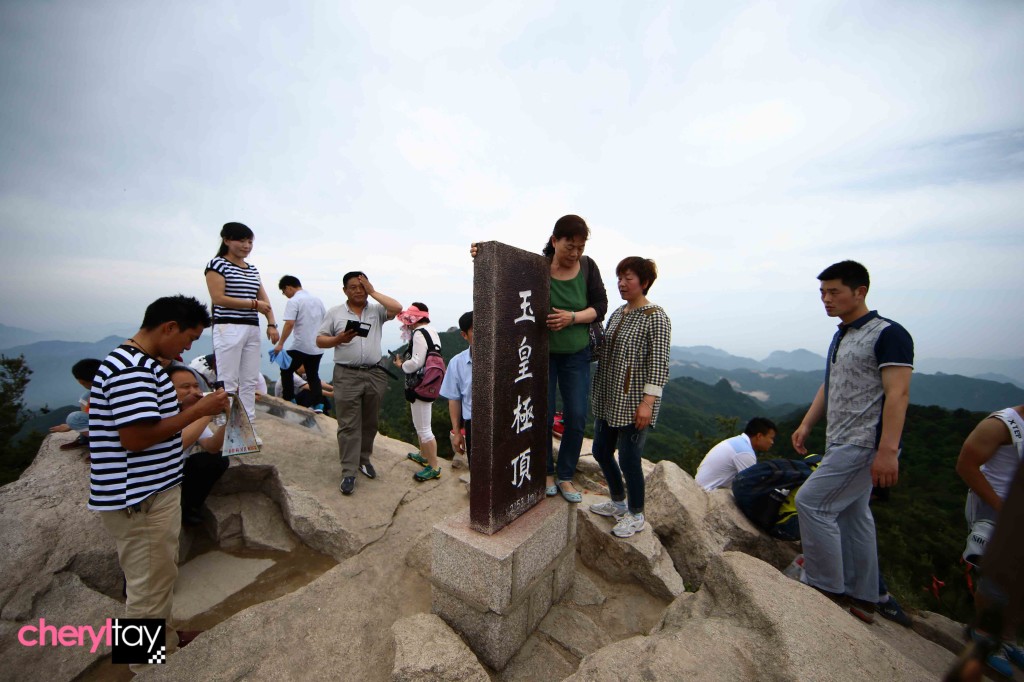 What you can do is to forgo the signboard and just sit in a corner so you can get a decent photo without anyone ruining it! 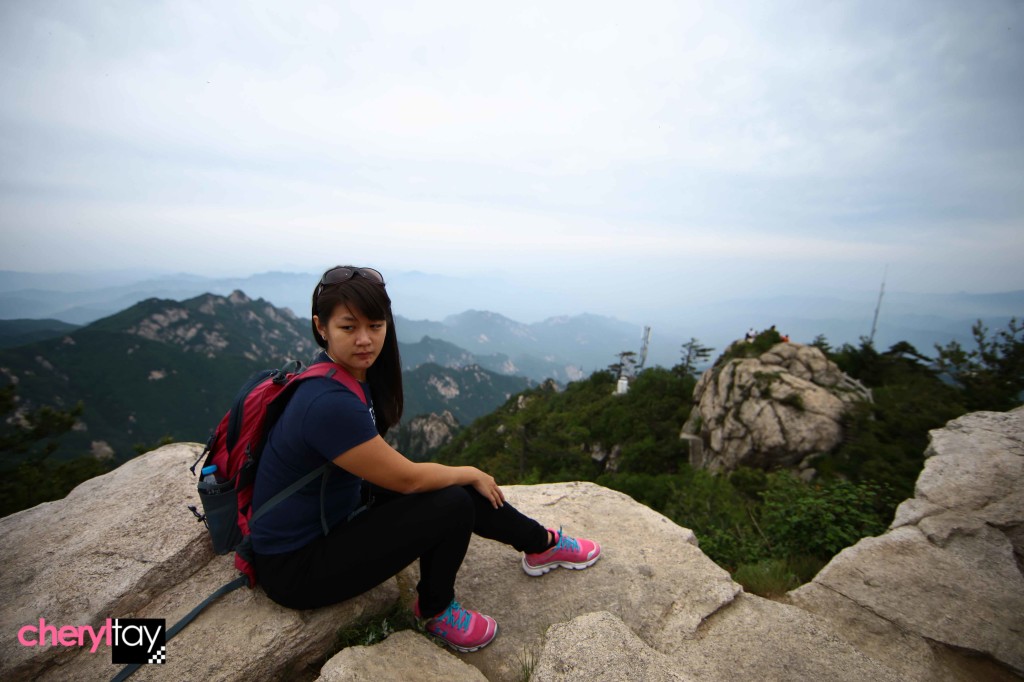 To get back to the bottom, you can either trace back your steps and take the same cable car back down or you can do what I did – take the slides down! 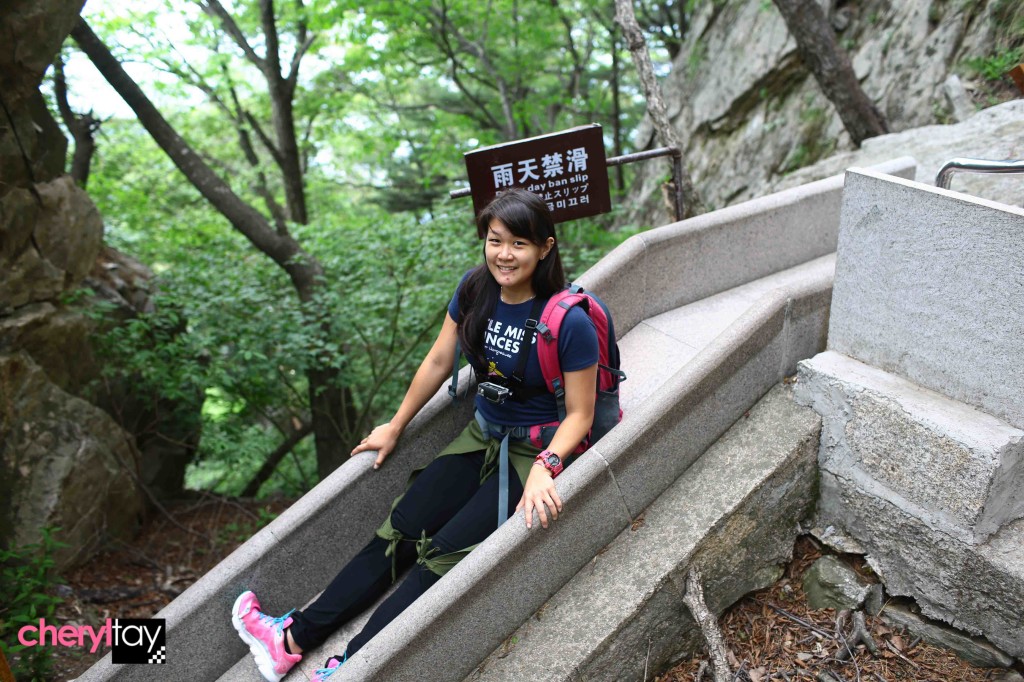 At a separate ticket price, you can take a series of six slides down about a third of the mountain. While taking the slides is a lot of fun, the hike down the remaining distance will take you quite a while due to the steeper steps and downward slopes.

I took about an hour and a half to walk down the rest of the mountain after coming down al the slides. This time included getting these men to carry me down for a distance of about 500 metres (at CNY160 per person). They were going down so fast that I got a little scared! 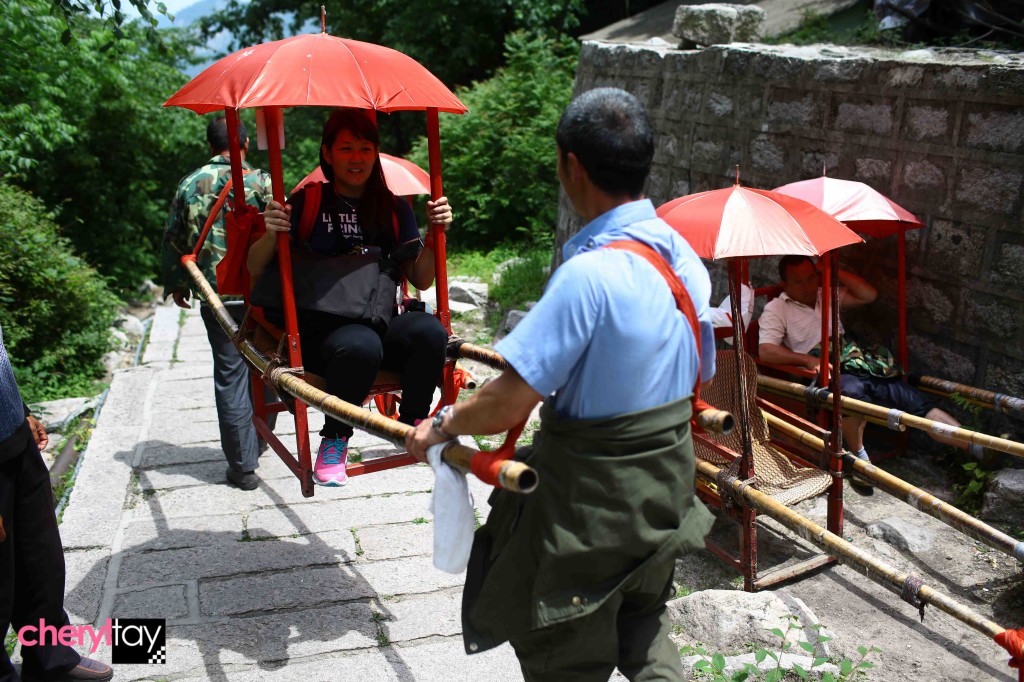 It was a pretty exhausting day with the climb up and down, but I promise you the views are worth it. Again, please wear comfortable shoes and clothes, as well as keep yourself hydrated. The weather at this time of the year is cooling so you can enjoy the cool mountain breezes.

I would love to return to Mount Yao to try river rafting one day – but for now, I’m satisfied after soaking up all that scenic landscapes!