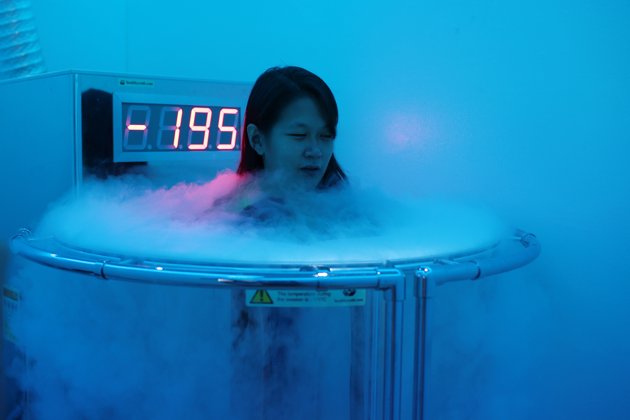 Recover faster or lose weight by tricking your body into freezing

I’ve never been very good in the cold, so the idea of stepping semi-naked into a chamber and taking the body to -200 degrees Celsius was not very appealing initially. However, it wasn’t as scary or or bad as you might have thought. This process is called whole body cryotherapy and it is based on a similar concept as ice baths, where the low temperatures will help your muscles to recover faster, especially after a tough workout. All you have to do is strip down to your underwear (bra and panty for the ladies, briefs/boxers for the men) and then step into this open-top chamber that will fill up with vapourised liquid nitrogen as low as -195 degrees Celsius.

Read the full story I wrote on Yahoo! here.

At the moment, Absolute Zero is the only place in Singapore and in Asia to offer this. The whole session is no more than three minutes, but first-timers will be only be given 1.5 to two minutes. I don’t have any injuries or nagging pains at me because I’m not a high-level competitive athlete or something, so there was no pain at all during the process. I just felt very, very cold and I was advised to keep turning in circles to distract myself from the freezing temperatures.

Benefits of whole body cryotherapy include:

How it works: Your body is tricked into believing it is getting frozen, thus everything will start to perform at efficient levels, as it goes into survival mode. The low temperatures trigger muscle regeneration and immune-system stimulation, releasing hormones such as endorphins. When you re-enter normal temperatures immediately after the treatment, the body starts to circulate blood rich in oxygen, enzymes and nutrients. The body is also said to burn 800 to 1,000 calories in a single session.

Absolute Zero was a sponsor at the recent ONE FC in Singapore. Adren How, managing director of ONLY Aesthetics that owns Absolute Zero, said, “We decided to partner ONE FC because we feel that our technologies can help to improve sports recovery and performance, which is especially important for MMA fighters as they are engaging in a body endurance sport which causes them to have injuries all the time.”

Fighters Brad Robinson and Bruno Pucci had a go at it before their fight last Friday. Check out what they have to say about it: