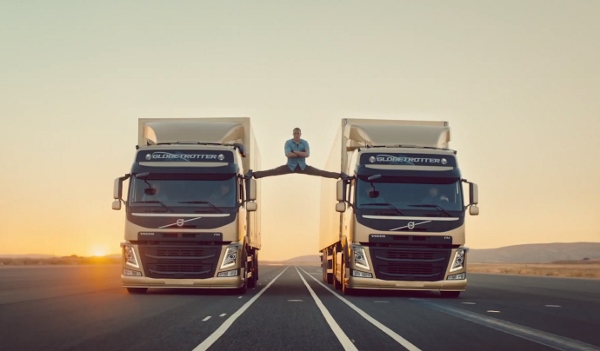 Displaying its capabilities through daring ‘live’ tests, Volvo Trucks produced a series of videos that will get your heart pumping. The Live Test campaign features six videos that demonstrate innovative features in Volvo Trucks’ new truck series in a variety of spectacular ways. All told these films have been viewed more than 100 million times on YouTube.

Here are all six of them, including the famous Jean-Claude Van Damme one:

Record-holding world champion highliner Faith Dickey battles to cross the line between two speeding trucks before they reach a tunnel. If she fails to cross the line in time, the mid-part of the tunnel will cut the line she is walking on. She has highlined at much higher heights, on longer lines and in harsher winds, but never slacklined with moving vehicles before.

The stunt was set up to show the precise handling of the new Volvo FH. Filmed on an unopened highway in Croatia in cooperation with Hollywood stunt director Peter Pedrero (James Bond, Harry Potter, Pirates of the Caribbean.) Directed by Academy Award nominee Henry Alex Rubin.

This is a daring test of the latest Volvo Dynamic Steering system. One that’s so easy to handle you can steer a heavy truck with your fingertips. Can a hamster drive a 15-tonne truck? Watch cute little Charlie the hamster steer a brand new Volvo FMX in a rough quarry. The driver does not touch the steering wheel at all, but only uses a carrot to guide the hamster to turn the steering wheel. The test was filmed in a steep quarry that’s infamous for its challenging conditions — Los Tres Cunados in northwestern Spain.

Watch a red truck being chased by a herd of bulls through the streets of a Spanish city. This ultimate manoeuvrability test is a live test from Volvo Trucks to show how the new Volvo FL performs on tiny twisting streets in Ciudad Rodrigo, Spain.

Oscar nominated director, Henry Alex Rubin, used 28 cameras in total to capture the event from every conceivable angle. Together with 50 runners, there was a crew of 250 people on site and hundreds of local spectators.

The president of Volvo Trucks Claes Nilsson puts his neck on the line in his own exciting stunt. No trick filming, just standing on a Volvo FMX that is hooked from a crane over a harbour. The hook from the Volvo FMX is made of cast iron and holds up to 32 tonnes. This test was set up to show the robustness of the new Volvo FMX. Filmed in the harbour of Gothenburg, the home of Volvo Trucks.

Volvo Trucks technician Roland Svensson’s head measures 275 mm, while the new Volvo FMX has 300 mm of ground clearance. Watch how the FMX drives over Roland’s head with no problem, except your heart beating faster. Shot in Teruel, Spain.

Watch Jean-Claude Van Damme carry out his famous split between two reversing trucks. Never done before, JCVD says it’s the most epic of splits. This live test was set up to demonstrate the precision and directional stability of Volvo Dynamic Steering — a world first technology that makes the new Volvo FM easier to drive. Filmed in Spain on a closed-off landing field at sunrise in one take.