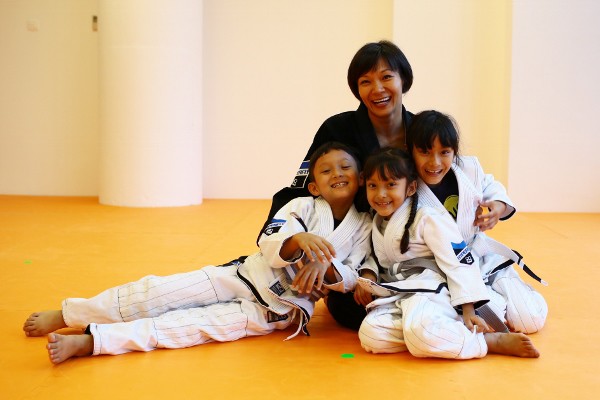 Mothers’ Day is just a week away and I would like to share Arlene Lim’s story. When I went down to check out Trifecta Martial Arts School – opened last November offering taekwondo and Brazilian Jiu-Jiutsu (BJJ) – and interview Arlene, 37, the founder and programme director, I didn’t expect to meet such an outstanding woman.

She humbly says she doesn’t think she’s a supermum, but I really take my hat off to her. After her marriage to Santos Rivas fell apart in 2011, she managed to hold herself together, with the help of newfound obsession BJJ (then). At present, she has three kids (aged 6, 8 and 10), runs three martial arts schools (including Trifecta) and a martial arts equipment company, as well as train competitively for BJJ. She also teaches at least five taekwondo classes a week.

She picked up taekwondo when she was studying at the States and went on to represent Singapore. After she completed her bond with the Singapore Armed Forces (SAF) – she was the first local female armour officer – she focused on JH Kim Taekwondo Institute which she set up with her husband. There are eight locations islandwide now, of which two are owned by her. With her whole life revolved around taekwondo, it was only natural that she wanted to get it out of her system for a while when her marriage failed.

So for almost two years, she left the taekwondo scene and went to Evolve MMA to pick up something new. She went for Muay Thai first, but found it boring and decided to try BJJ. That was it – she got hooked and went on to train two times a day every day, even achieving medals at the regional and global level. It was BJJ that helped her through her life ordeal, hence when she set up Trifecta, she decided to offer BJJ on top of taekwondo.

Her three kids are practising both disciplines, with her eldest daughter Isabel a six-time national taekwondo champion. How’s that for good genes?

[Read the full interview I did with Arlene on Yahoo! here.]