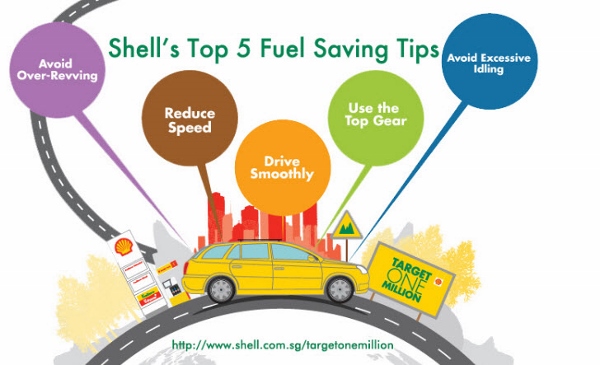 High fuel prices lead to aggressive fuel-saving campaigns that aim to educate drivers about fuel efficiency, so that they can get the most mileage out of their vehicles. Shell, for example, has been running annual fuel-saving initiatives since they launched their FuelSave products. This year, I’m part of their Shell FuelSave Blogger Challenge where we are to track our own fuel economy for four weeks by adopting the tips they gave while using their fuel.

For the past two weeks, I was on Shell FuelSave 95 for my Mits Lancer and I achieved an average of 10.7km/L, which is a slight improvement over the stated 10km/L on paper. You can grab a log card at any Shell station and then proceed to record the number of litres of fuel you pump each time, as well as the numbers on your mileage counter. Let’s see if I can improve on this at the end of the next  two weeks!

Shell has a list of fuel-saving tips (see end of article) which I tried and some worked better for me than others. It depends a lot on the driver’s style and behaviour, as well as the driver’s commitment to taking care of the vehicle. For instance, if you are very aggressive on the roads or you are lazy and often take your time to bring your vehicle for servicing, then the fuel economy of your car wouldn’t be very spectacular.

I will share my recommended five tips on fuel saving in a later post; meanwhile, I just wanted to bust some long-held myths about fuel economy. These measures may have worked with cars of yesteryears, but modern technologies have eliminated the need for them. Here are some of the myths that you should debunk:

In the past, it was advised that you should turn on your engine and let it idle for a few minutes in the morning when it is still cold. You don’t need to do that with modern engines now. In fact, driving will warm the engine faster up.

2) Do not fill past full tank

The pump automatically shuts off once the tank is full, but sometimes the pump attendant will top up a few more litres to round up the numbers. It is not recommended to continue topping up past full because it doesn’t give you any extra, but it’s not gonna wreck your wallet or purse with that bit more. If you are that concerned, pump the fuel yourself.

3) Do not leave tank too empty in case of evaporation

Making sure you have enough fuel in the tank to last the journey, but otherwise it’s ok to travel with a fuel tank that’s nearly empty. In the past, fuel may have evaporated inside the tank if it’s left too empty and escaped into the air. But modern fuel systems now have vapour recovery systems and even alert functions to inform you if the fuel cap is loose or if the fuel door is not shut tight.

People used to believe that if you top your car up during cooler parts of the day — such as early in the morning or at night — you will get more fuel at the same cost because cooler liquid is denser. Theoretically not wrong, but now, fuel is usually pumped from underground storage tanks that are naturally insulated and thus protected from temperature variations.

The fuel-injection systems in cars today are able to detect if the engine is revving above idle when you lift your foot off the accelerator, thus shutting off the fuel injectors and not injecting gas into the engine even if still in gear.

An idling engine will use up more fuel than stopping and starting a vehicle. That’s why there are automatic start-stop engine functions in modern cars, where the engine is shut off when the vehicle is stationary at a traffic light and restarts when the foot lifts off the brake pedal or pushes on the accelerator.

6) Use cruise control wherever possible

The objective of cruise control is to help drivers maintain a constant speed, which comes in useful on long roads or on highways. However, if you use cruise control in city traffic, the system may apply sudden acceleration when going upslope and you are better off controlling that yourself. Also, you might have to suddenly brake to stop the cruise control if you spot an obstacle ahead. All these abrupt actions waste fuel.

It’s not about the size, but what’s under the hood, what material are used in the construction of the car and also the design of the body. For example, vehicles these days have advanced technologies such as hybrid drivetrains, diesel engines, turbochargers and low-rolling resistance tyres.

If your vehicle has an old engine with a carburettor, then replacing the air filter frequently will help. However, modern, fuel-injected engines are designed to deliver better fuel economy and lower emissions, offering regulated air-to-fuel ratio. That doesn’t mean you don’t have to replace the air filter; just change it according to your vehicle’s maintenance schedule.

Last time, manual gearboxes had more gear ratios than the automatic ones. But now, automatic transmissions are so advanced, with up to eight gear ratios. Also, not every driver knows how to shift right with a stick, hence not optimising fuel consumption.

Now that I have busted those myths, what are some fuel-saving tips? Shell has been encouraging drivers to practise good habits that will help them to improve their fuel economy. Here’s a look at the expert advice they have: 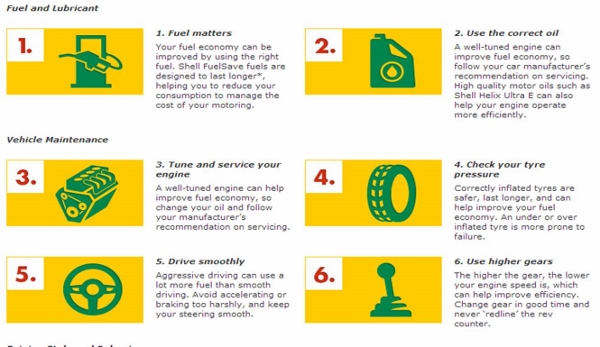 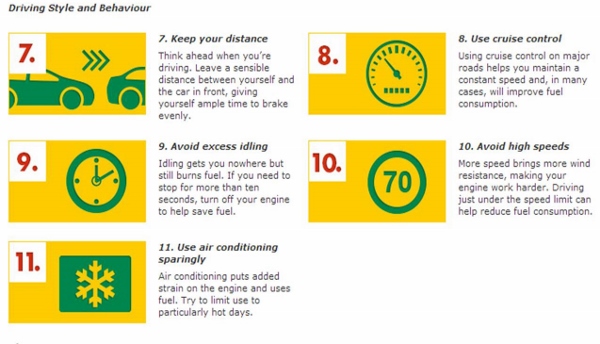