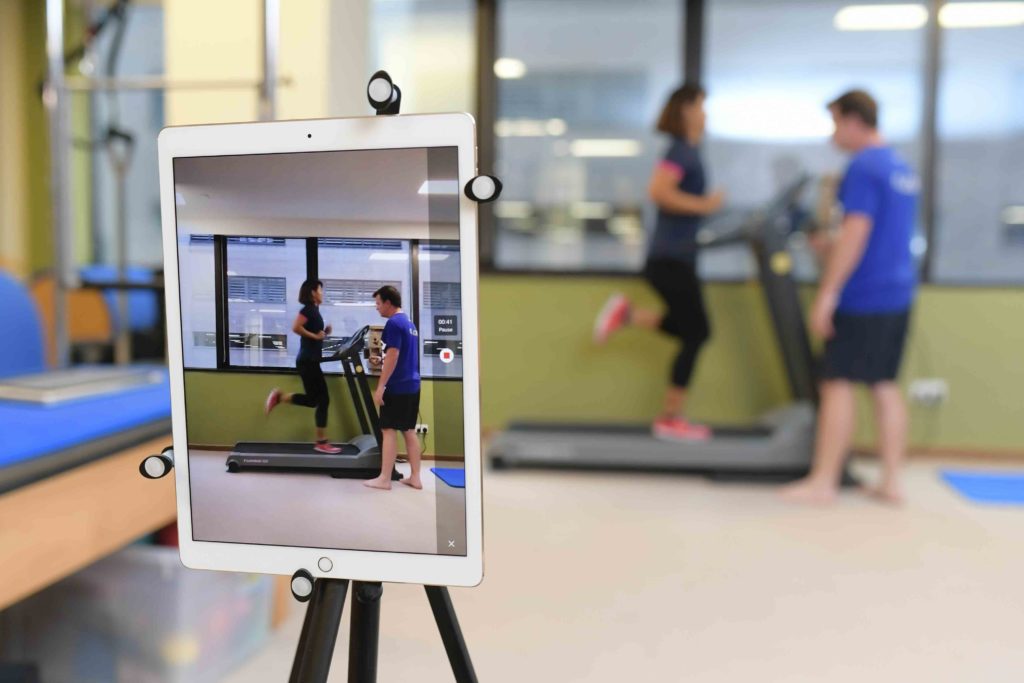 When you are training hard for an upcoming race or competition, what are some of the things you fear the most? I’m sure injury and/or illness would rank pretty high up that list. Hence, it is crucial that you train WITHOUT pain.

There will be a certain level of pain from muscle soreness, but what I’m referring to is pain that will knock you off your training. That is the kind of pain you DON’T want.

Running is something that we all can do – in the sense that it’s a movement natural to the human body. You start with crawling, then walking and then you run. But how we differ is in the way we run (technique), how fast we run (speed), how far we run (endurance). 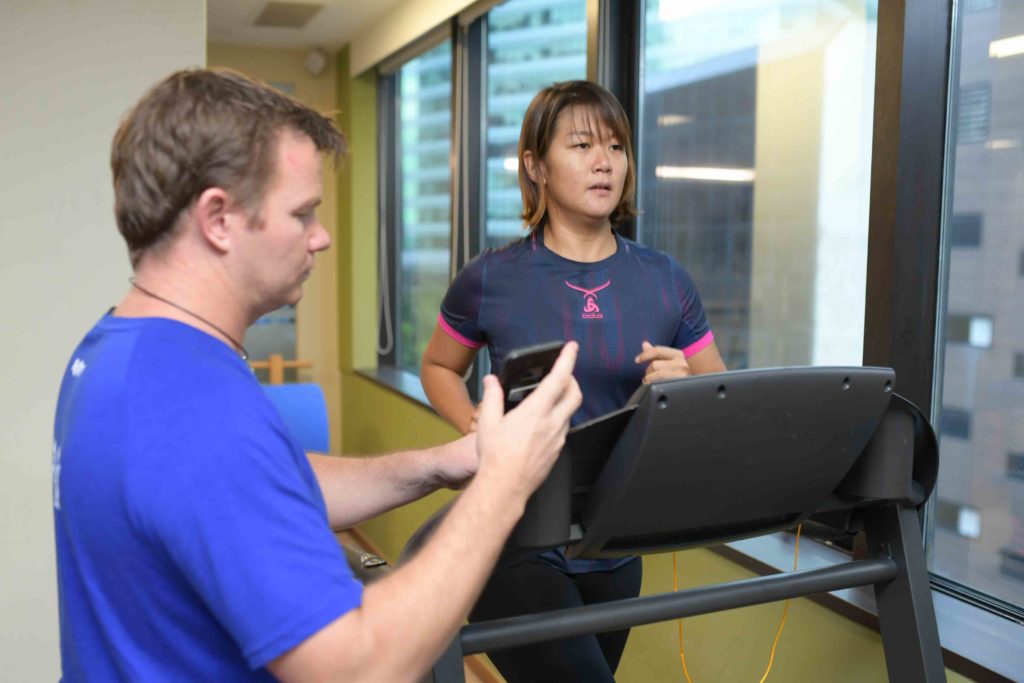 Daniel is Asia’s first Runity Master Trainer and he brought the Runity programme to Singapore – It’s for all types of runners (not just elites) that helps to condition people to run without injury and improve efficiency to become better and faster runners.

Our objectives were to find the shortcomings in my running style and correct them over time with prescribed exercises, so as to run more efficiently and also look better in photos (#priorities).

The first step was to do an assessment of my running style and I was given a detailed report. In short, I have limited range of movement in the hips and an over-striding problem. Because of how tight my hips are, it causes me to hinge when I run and thus I’m not running upright enough. 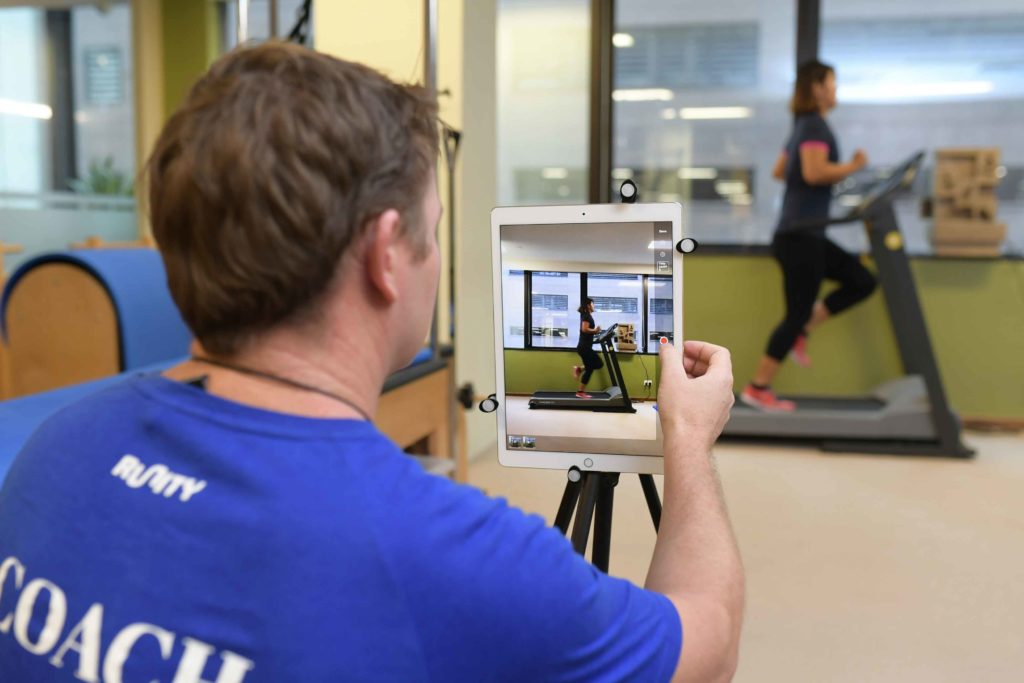 What he did next was to prescribe a personalised conditioning plan, with specific exercises tailored to my problems. Here are some of the exercises:

This exercise works on spine mobility as well as strengthening the glutes and hamstrings. It’s a great way to combat the effects of sitting too long. 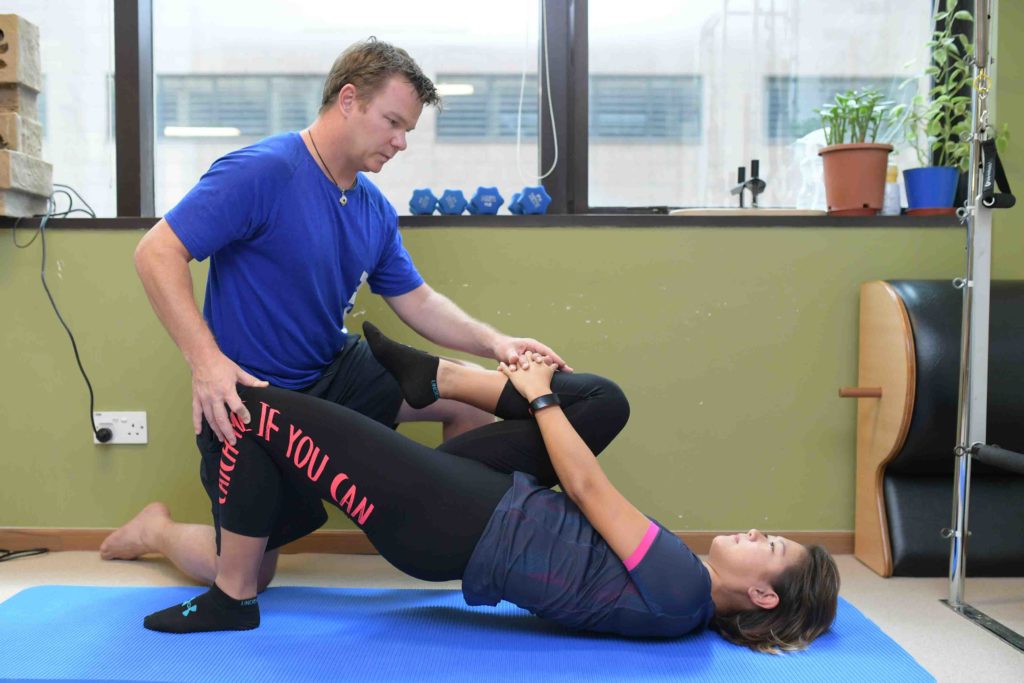 This exercise works on upper body strength but its main benefit is that it works on the stabilisers of the hip, glutes, hamstrings, adductors and abdominals (basically the big muscles around your core). When this coordinated strength is brought into an upright position in running, it helps to give a stable trunk to facilitate efficient movement of the legs. 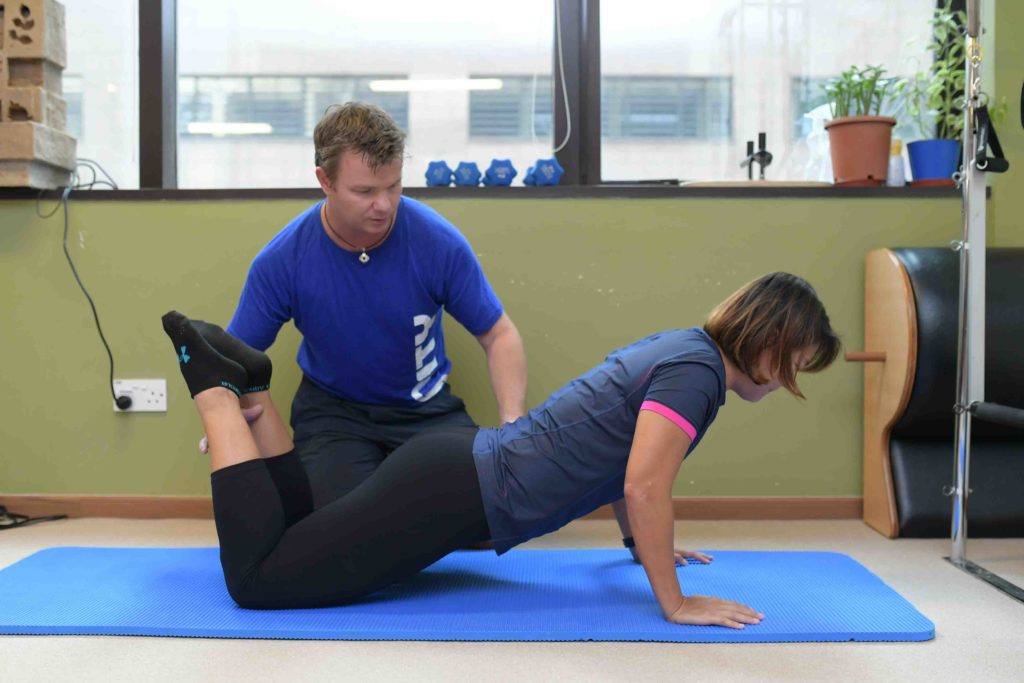 This exercise conditions the foot and ankle joints as well as the muscles around the ankle to improve stability and assist in distributing force to more areas. The more concentrated a force on one area, the more likely that area will suffer an injury. 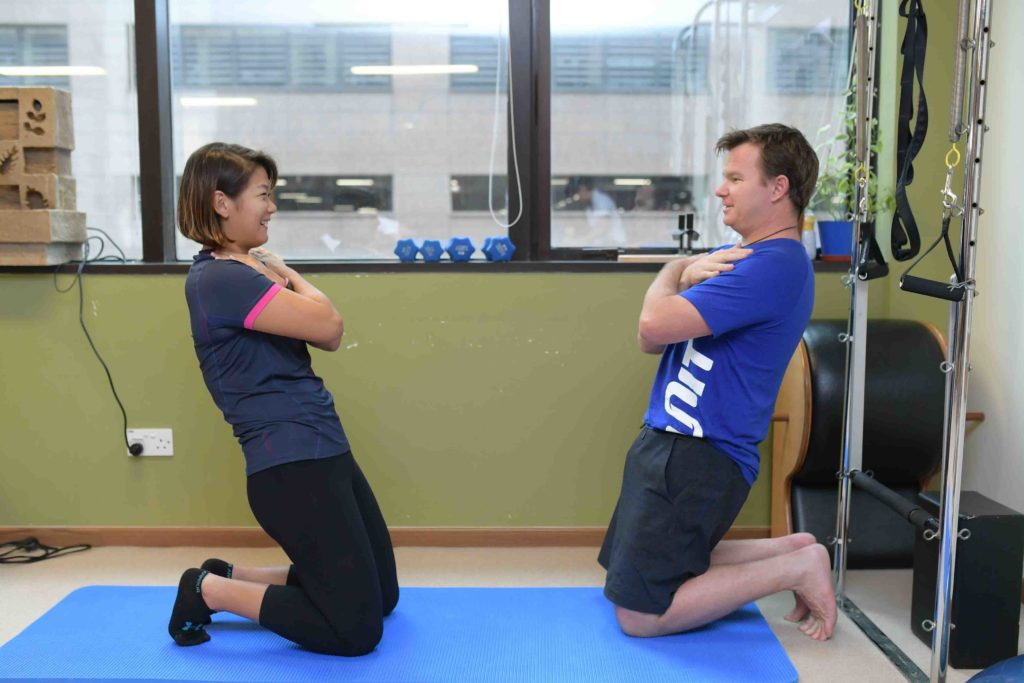 This exercise is to work on getting an upright posture that directly relates to running. It opens the hips, which is essential in an efficient running form. Most people will want to lean forward in this exercise as it reflects tightness in the quads and hip flexors, which effects overall running posture. It also helps to develop lateral stability, this is important for keeping the pelvis level and stable when standing on one leg (the majority of the time when we are running). 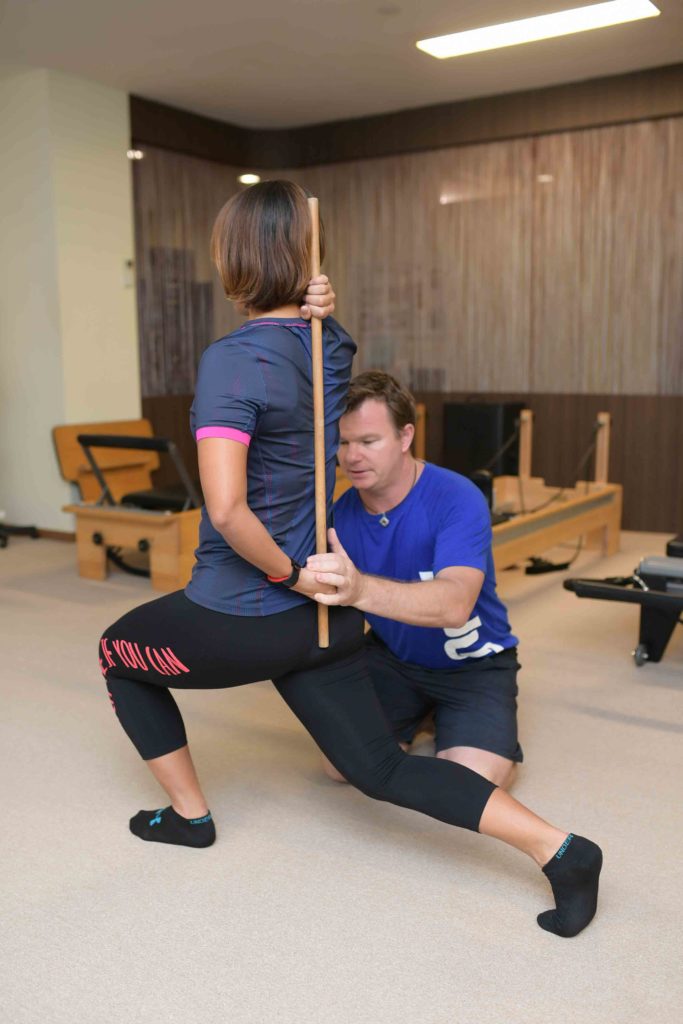 Some people have been asking me if it is actually possible to change your running technique, especially if you have been running the same way for decades. My answer to that is, yes you can improve your running style but I will be honest, it will take time and effort.

These exercises are targeted at helping my muscle imbalances and weaknesses. Conditioning takes time, hence you have to be diligent in your homework, ie. do these exercises regularly.

After a few months, here are the results: (Left – Before / Right – After)

1) Initial contact is closer to the green line (centre of gravity), so there’s now much less horizontal braking force and load through the body. 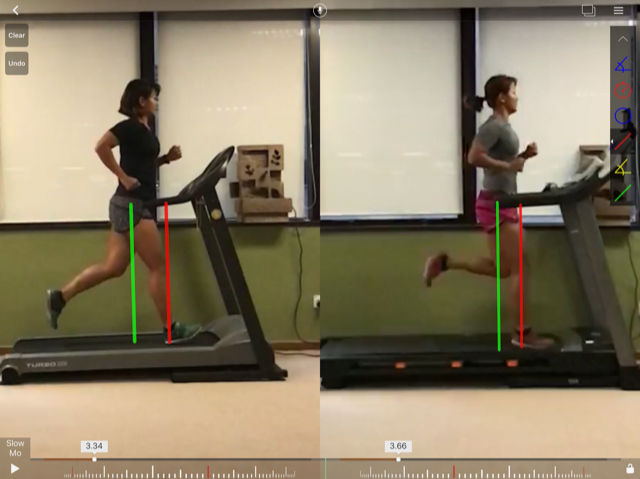 2) The shin alignment in the After video is more vertical, therefore allowing the body to absorb the force much better. In the initial video, there was also a little heel strike. 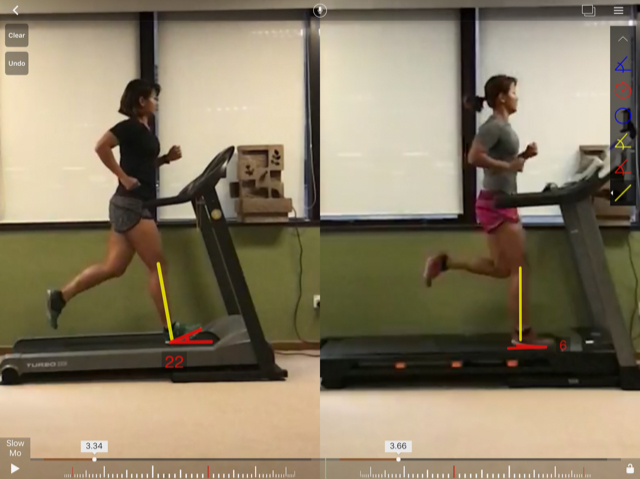 3) The heel height on the swinging leg is much higher now, making the leg less heavy and thus less work on the quads and hip flexors. This allows energy to be recycled into the next step, making the running more efficient. 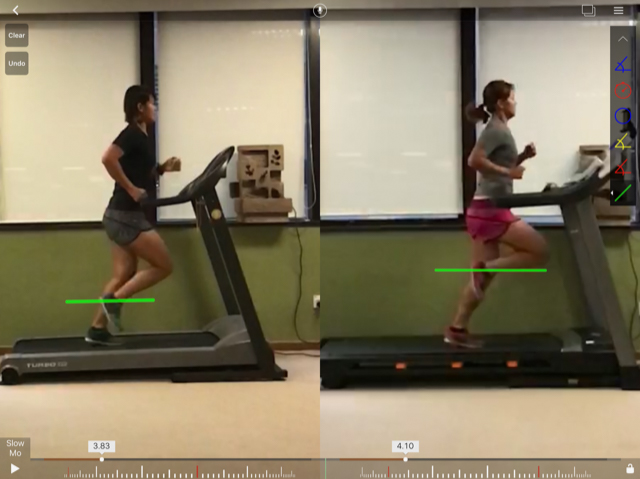 4) During mid-stance where vertical load is the most, you will see that there is a significant reduction in lean forward now, meaning there is less load through the lumbar spine and better use of the correct muscles of the leg. 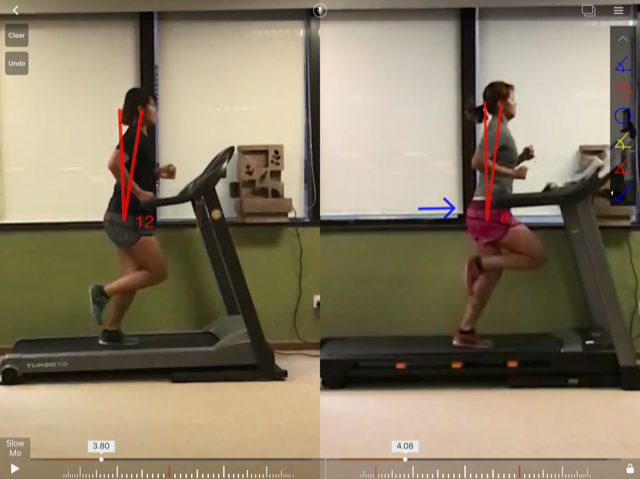 You can watch the full video analysis here:

Here's the full analysis by Runity:

So, I’ve made progress but there are still areas to be worked on. You cannot expect to overhaul your running technique immediately. It’s a constant work-in-progress! As your body changes (eg. you gain or lose weight), your running style will alter slightly too.

It’s good to be aware of your problem areas so you can pay more attention to it. When I run now, I try to make a more conscious effort to my running style (when I’m not running out of breath). My running photos are also nicer now!

If you’re interested in correcting your running technique and become a pain-free runner, you can check out http://www.focuspilates.com.sg/runningassessment.html.

PROMO: Get a complimentary Running Conditioning class, by quoting CHERYL TAY when making the booking! Also, enjoy 10% off the Running Assessment Package. (Promo valid till 31 July 2018).