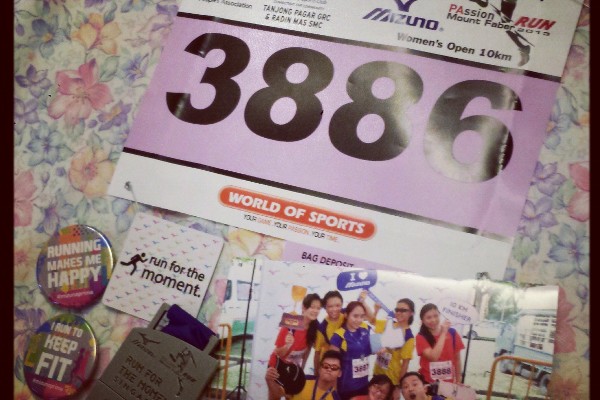 I have always liked running long distances, so when I was offered a slot to run in the Mizuno PAssion Mount Faber 10km Run, I couldn’t refuse it. It’s funny how I’ve only ran a half-marathon once and never a marathon before though.

World of Sports held a blogger challenge, where the public had to rank the eight of them (2 guys and 6 girls) and the one who ranks them right will win a pair of shoes. I was a last-minute replacement for one of the bloggers and I was only informed on Tuesday about the Sunday run! 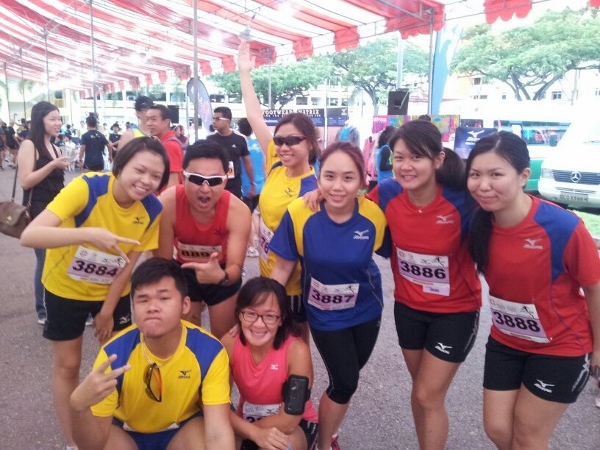 It’s too late to do any form of training, so it was just go, run and not think so much about it. It was also a good time to catch up with friends, like Carrie and Rachie of The Cambelles, Jac the nonsense girl, Smith and my BFF + fitness buddy Daphne Maia Loo! It’s been a while since Daffy and I did any of these mass fitness stuff together! I also made new friends like triathlon-crazy Isaac and Michelle.

See the pretty pink shoes that us female bloggers wore: 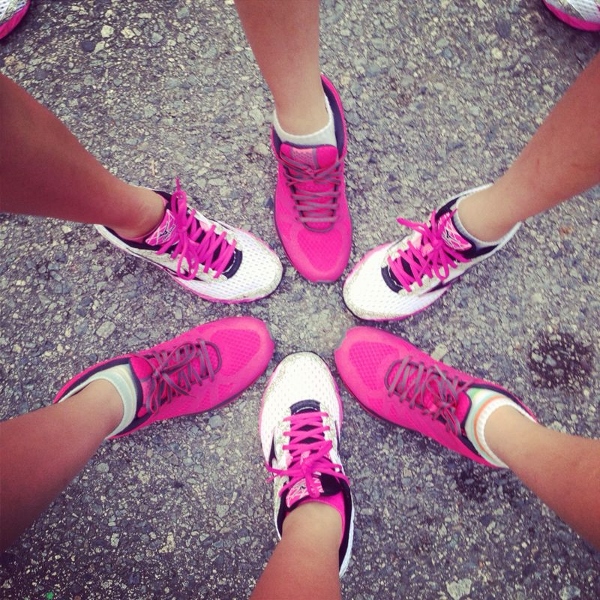 10 kilometres is not difficult for me, but what I didn’t mentally prepare myself enough for, was the treacherous Mount Faber uphill part! This is the first time I’m running Mount Faber and the 2km uphill ascent was sheer torture on the legs. I ended up walking most of it and couldn’t help feeling demoralised!

When there’s an up, there’s a down, and the run got easier once we went downslope and onwards to the end. I made a mistake of opening my stride a little too much downhill, so by the time I got to the bottom my legs were killed. If I ever run Mount Faber again, I have to be properly trained for hills!

Like all mass runs, it is crowded at the start and people were running off the pavement onto the main roads, taking up two lanes of some of the three-lane roads. That was pretty dangerous I thought, but the police stepped in to marshal and control the crowd. Throughout the run I got stopped at the traffic lights thrice, which broke the momentum a little but it’s all part and parcel of such mass runs on the streets. 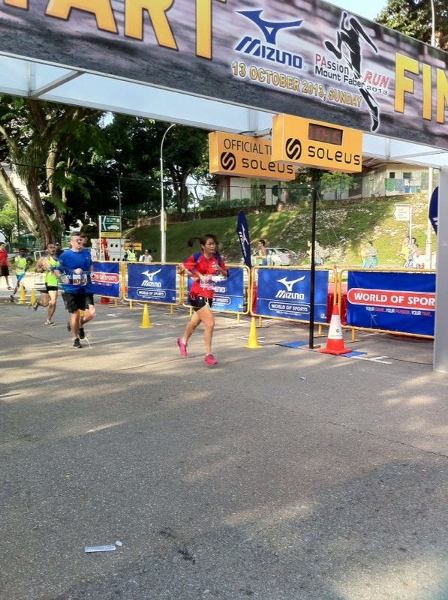 I finished second among the bloggers, but because I was a last-minute replacement, I was not in the running for the ranking so my name won’t be found in the list.

This was us after the race: 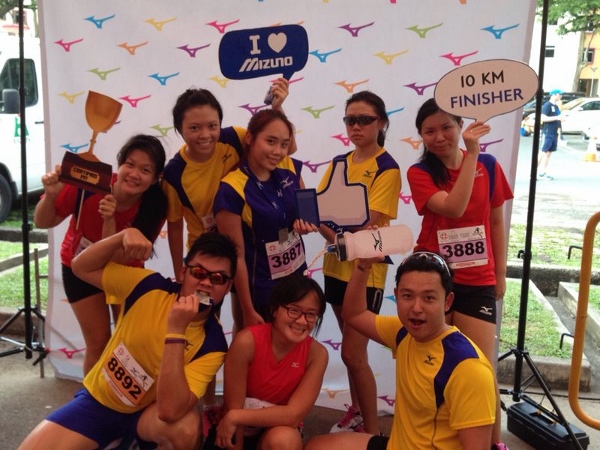 I felt a little disappointed with my time, because I felt that I could have run harder and I did give up at some points, especially on the uphill. Well, I still think it’s a good well done for a birthday run! (I woke up at 6am the morning immediately after my birthday, zzz.) 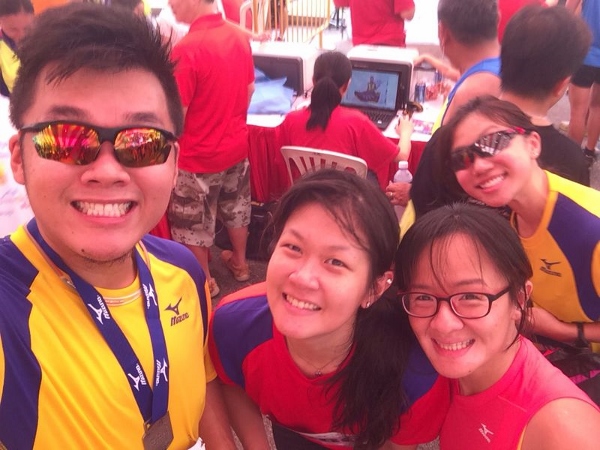 Tips for your next 10km mass run:

1) Check out the route before

If you have time, go for a drive or cycle along the route so you can better prepare yourself .

Most of the time, most of us will just turn up at the mass run without knowing exactly what the route is like. In that case, don’t start out too fast. Start slowly and build up gradually. If people at the start want to pass you, let them go. Anyway, it is most crowded at the start and hard to start fast unless you start out front.

3)  Eat no later than an hour before the start

You can’t run without fuel but eating too close to start time is not a good idea. Try to eat a carbohydrate-rich meal no later than one hour before the race. The few days before the race, try not to eat any kinds of food that might upset your stomach.

Have something easy to digest before the race, like a banana or low-fibre cereal.

4) Do not use brand new shoes

Take your pair of new shoes and break it in before your race please. I only collected my shoes on Wednesday, so I took it for a light jog and walked around in it so I could get used to it. You don’t want to risk getting blisters

5) Don’t bother with any last-minute workouts

Avoid doing hard runs the week of the race; it’s not gonna help you improve your timing thaaaaat much. You might end up making yourself sore and risking injury. It is advisable to stop weight training two days before the race as well.

Noticed the pink shoes I was wearing? 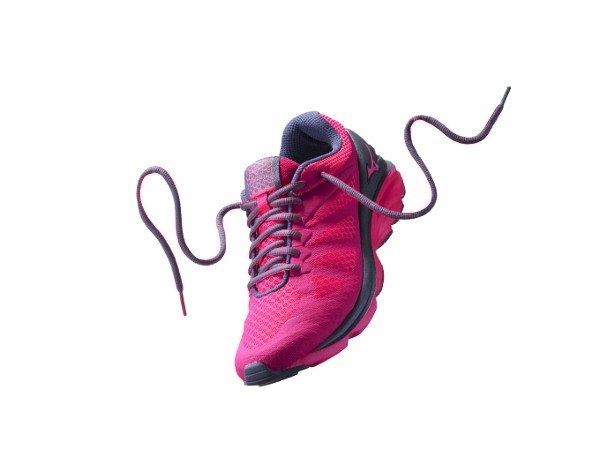 It’s actually a ‘fun run’ type of shoe. Targeting the non-competitive masses, Mizuno launched the Prima Cantabile series with a splash of bright colours from pink to yellow to blue. To them, running is not just about speeding fast in a race or going for long distances in a marathon, but about enjoying it with friends and looking good while at it.

I feel that this series would be better suited for newbies. It is pretty comfortable and is designed to help its owners avoid getting blisters. Made with X-10 technology – a very durable carbon rubber – the shoes allows for longer wear in high impact areas and provides more traction upon heel strike.

It did not give me any problems when during the 10km run, neither did my feet feel suffocated.

The Prima Cantabile is for both men and women, available at S$129 at Mizuno Concept stores (Paragon and Marina Bay Sands) and major World of Sports stores. 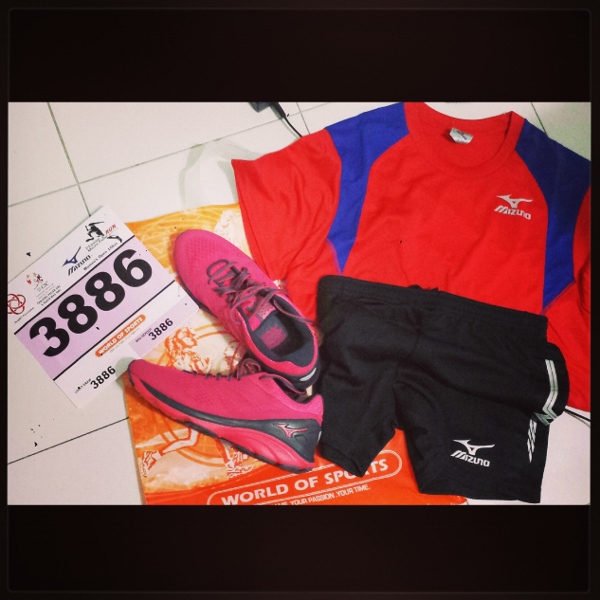 Thank you Chad for giving me this opportunity to run!

This is the sweaty us giving him a hug at the end of the race: 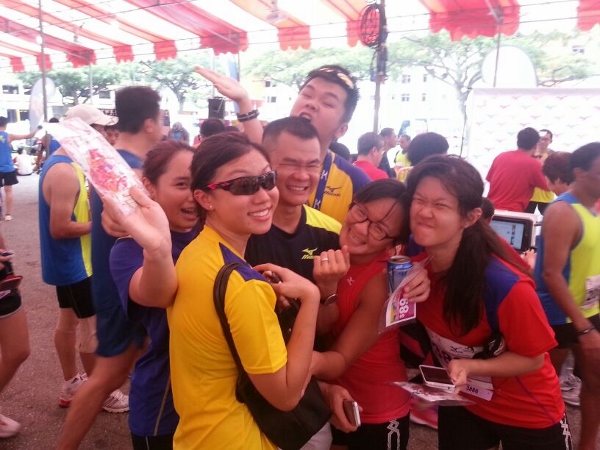 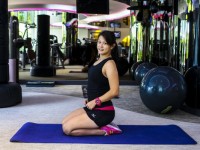 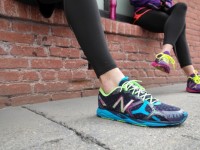