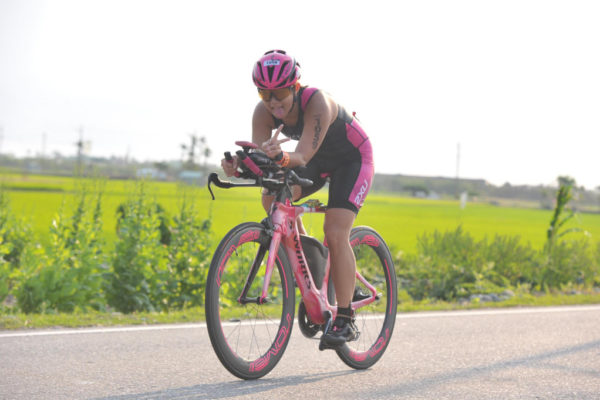 Excited, I was feeling very excited to race at the Ironman 70.3 Taiwan because I missed out on Colombo after battling a stupid flu bug that kept me in bed for a week. I only had three weeks to the race at Taitung and I was struggling to get my pace back (I was still coughing and having a runny nose). I was worried yes, but I wasn’t gonna miss Taiwan so I just tried to stay healthy (by eating less chocolates). It was a busy time for me too, with the sloggi Zero Feel x Rock The Naked Truth launch event for example, and I was strutting around in my panties to strangers the night before I flew off.

Well, I was so happy to get on the plane out to Taipei – at least I made it out! LOL. The journey to Taitung was a pretty long one and the logistics to get to this race is a little more complex than other races. From Singapore I flew to Taoyuan International Airport, then took a bus to Songshan Airport to get on a domestic flight to Taitung Airport. It’s a full day of nearly 12 hours of travelling! There are other ways to get to Taitung, such as flying into Kaohsiung Airport and then taking a bus for 5 hours; or taking a bus from Taoyuan Airport to a train station to take a train to Taitung. Whew, I was just so glad to arrive in Taitung finally.

So I heard that the Ironman 70.3 Taiwan was a relatively “easy” race because it’s a wetsuit swim, the bike course is flat and the weather is cooling. After completing it, I say LIESSSSS. HAHAHAHA! 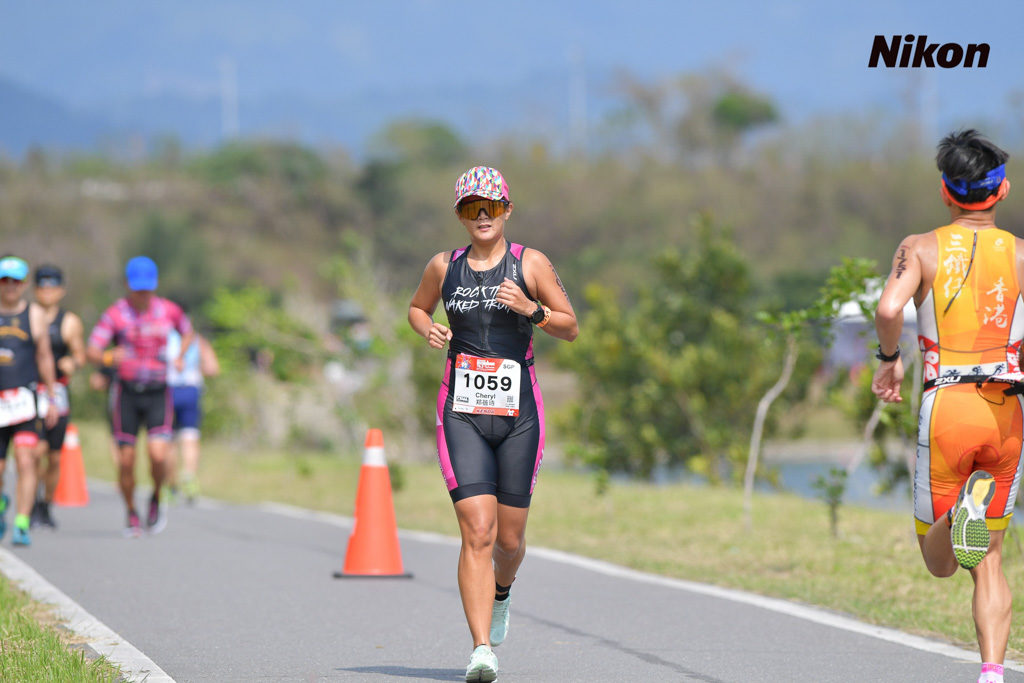 Flagoff was at 6am for the pros, following by a rolling start for the rest of us age groupers. This is probably my earliest 70.3 race start so I was up at 3am! Was I feeling nervous? A little. But I wanted to go out there and get it done. WOOHOO! This is also Queen Bitch II’s first race after her refresh (have you seen how gorgeous she is now?) and I was so proud of her.

My first wetsuit race!! The swim is done at Flowing Lake, which is actually just a huge manmade swimming pool. It’s rectangular and filled with freshwater (not sea water). Temperature of the water was just below 24°C, so wetsuit was optional (but pros weren’t allowed to use wetsuits, unless the water temp goes below 21°C). Of course we would choose to go with wetsuit – it does give a slight advantage. We were released into the water in fours, so there wasn’t a ‘washing machine’ entry. With the wetsuit, the water wasn’t too cold and it felt quite refreshing actually.

The route was straightforward – just swim down the length of the rectangular lake on one side and then come back the other way. I started the swim ok and my pace was on target up to the U-turn point. On the way back I felt slower so I tried to swim harder. When I got out of the water, I saw the time and I was like, oh shit why so slow! But I tried not to let that affect me and just got on with the race. 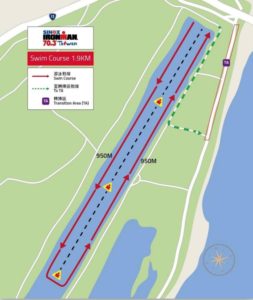 When I did my test ride prior to the race, I encountered some really strong winds and I was hoping that the wind wouldn’t be too crazy during the race. There were some winds for sure, with some headwind at some parts, but nothing as bad as what I experienced on the test ride – PHEW. That also means we got some good tailwind here and there. 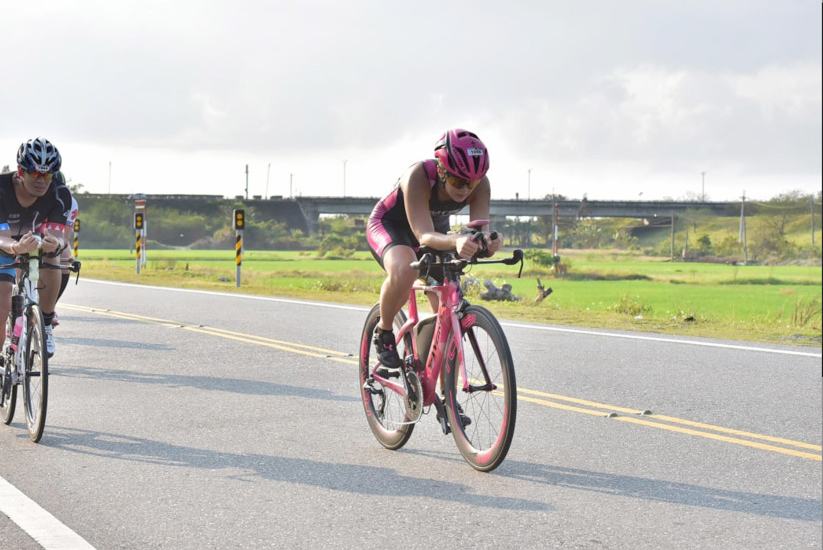 We biked out of transition and then headed up north for a little bit, before coming round to pass the transition area again to head to the south next. The bike route is mostly done on the highway with long stretches of flats, but it’s not entirely flat flat, It’s more like Mandai, with small ups and downs, and an occasional climb. There was a pretty long climb (of 7 percent gradient) around the 46km mark, but the scenic views were so beautiful that it helped to ease the pain. We had to do this climb twice – there and back – and on the return I felt the headwind more. 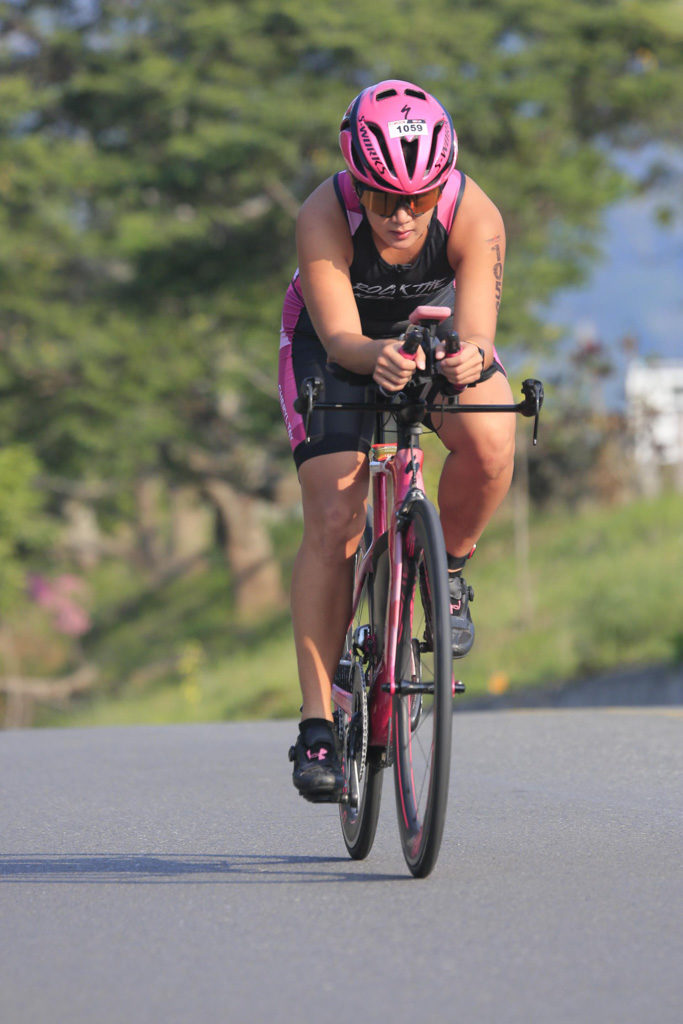 There were three aid stations and at the first one, when I saw the pink bottles I immediately took one. I didn’t wanna throw it out so I stuffed it into the front of my trisuit to bring it back. It looks kinda unglam and ruined most of my bike pics, but it’s ok! It’s quite funny right. 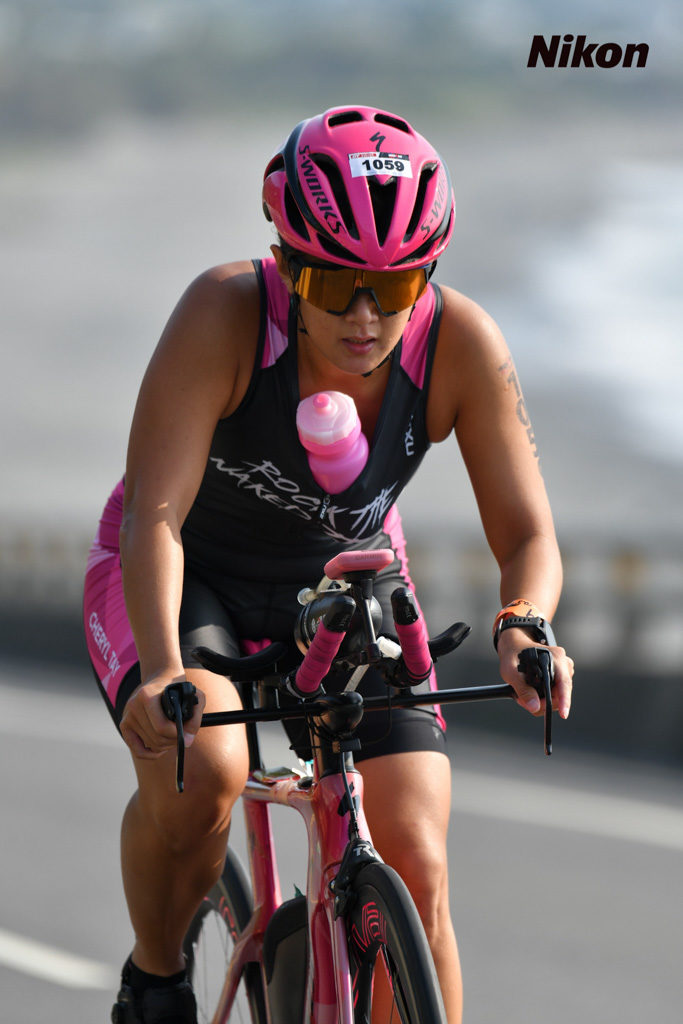 The draft marshals were so strict btw. There were a few guys around me, taking turns to overtake each other, when a draft marshal suddenly rode up on his motorbike. He had one hand in the air counting the seconds, because each person only has 25 seconds to complete the pass and anything longer would be considered drafting. I’m not sure if it was the same draft marshal but they kept coming, and one blew his whistle to issue a warning. Then another one (or the same one I don’t know) stopped one of the guys and issued him a penalty card. Thank goodness I held back and not get caught up in that mess!

Oh! A media motorbike rode next to me for a bit to film me and I smiled and waved!! Probably because Queen Bitch II is so CHIO. I don’t know which media outlet this is for, so if anyone sees any footage of QBII please let me know! 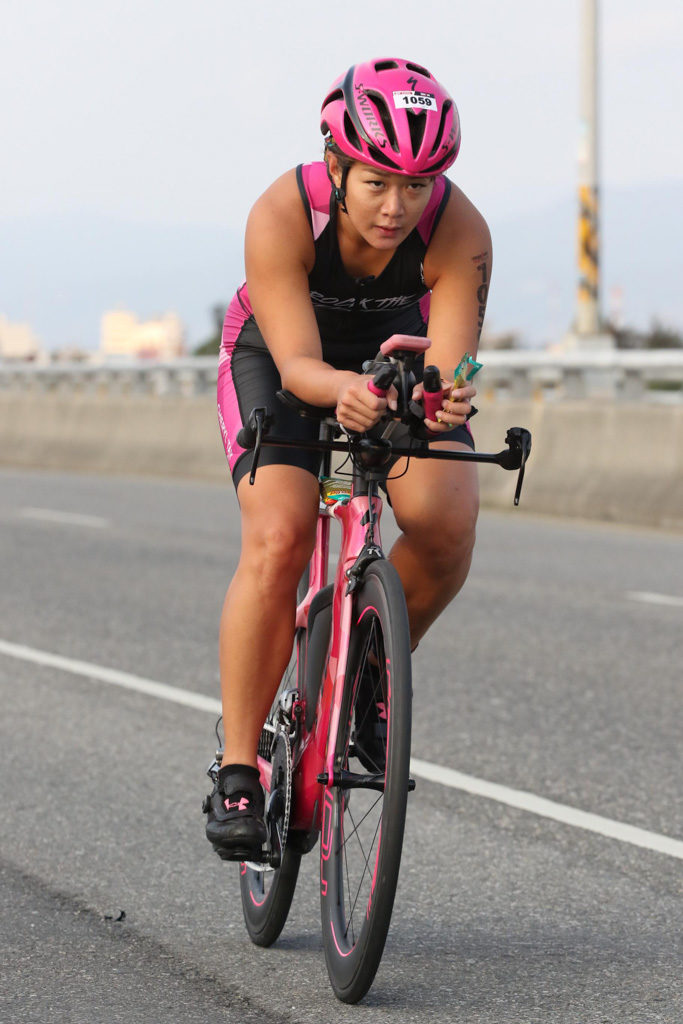 I could feel the sun heating up as I finished up the bike leg. Coming back into transition, I was thankful that my spot was nearer to the Bike Out/In, so I didn’t have to run much with the bike. T2 was a lot smoother – just off with the bike stuff, on with the run stuff and then down the length of the transition area to get out.

The initial part of the run was a bit confusing – we had to run around one part of the lake, then go around the other part to enter the Forest Park (refer to the red line in the diagram below). 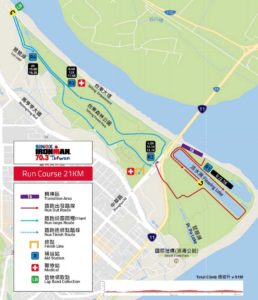 Once you enter the Forest Park, you just loop three times and then head to the finishing chute. The run route is not flat flat, just a little bit of slopes here and there. I don’t like loops but this wasn’t so bad. The aid station was approx every 2km and the drinks were still cold even at the end. We had to collect a different coloured band after each race and I didn’t realise that the bands had motivational words on them, how cool! 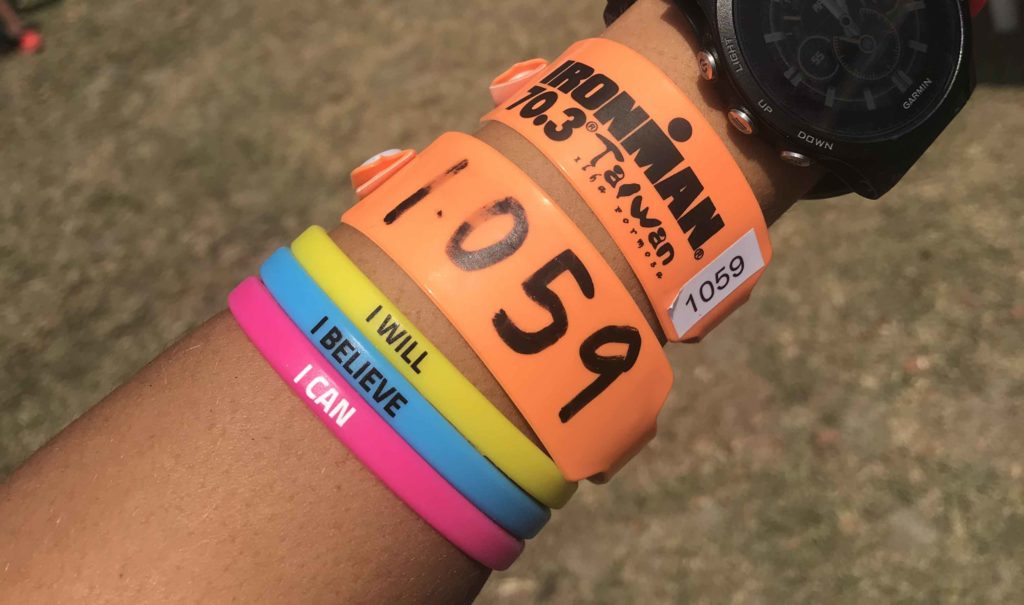 Running more loops also means getting to see your friends (both fellow participants and spectators) more and that helps, because every bit of encouragement counts. Some people talked to me, told me that they follow me on IG and I really wished I could talk more or respond more enthusiastically but I was trying not to die, paiseh! It wasn’t thaaaaaaat cooling to be honest. I could feel the warmth of the sun heating up my back, but this is nothing as bad as Danang or Langkawi or Cebu, where it is hotter and more humid la. 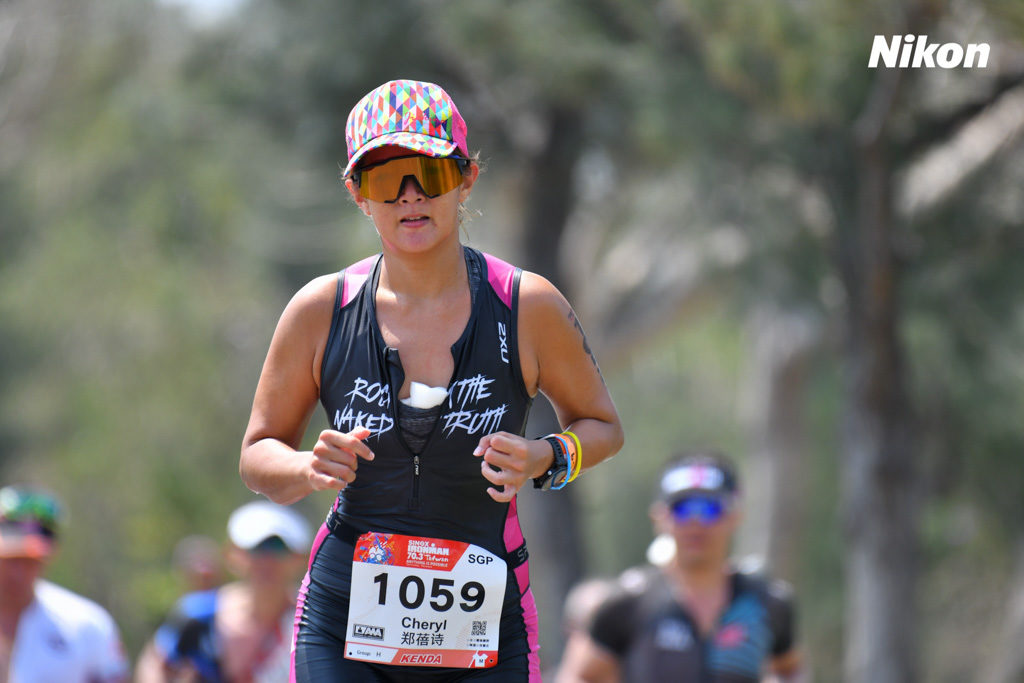 The funny thing is, something went wrong with my tracker and my friends at home were worried when they saw my pace of 11 min+ per km for the first 5km. They thought I was injured, CHOI CHOI TOUCH WOOD AH. To compensate for that, the pace for my last 10km became 2:50/km. HAHAHAHAHAHA. After the race they corrected the pace/timings so all is good now, but it scared my friends for a while. 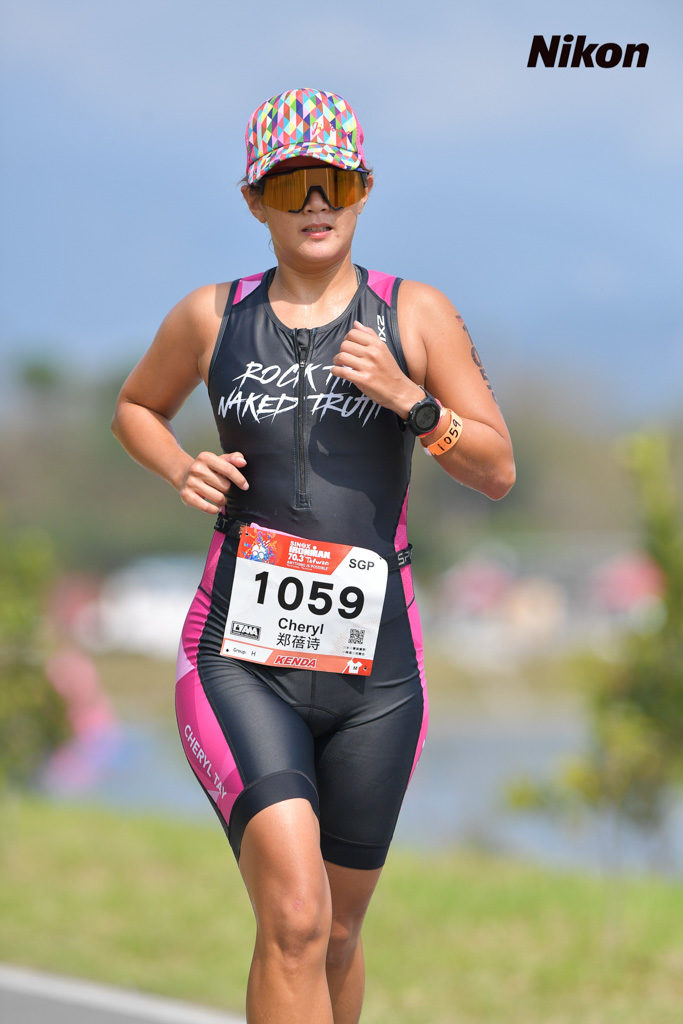 When I saw the finish line was near, I pulled out whatever energy I had left in my legs and chiong-ed. I saw this man ahead of me and I willed my legs to go faster because I didn’t want him to block my finish line photo again (like in Phuket). HENG AH I managed to overtake him! 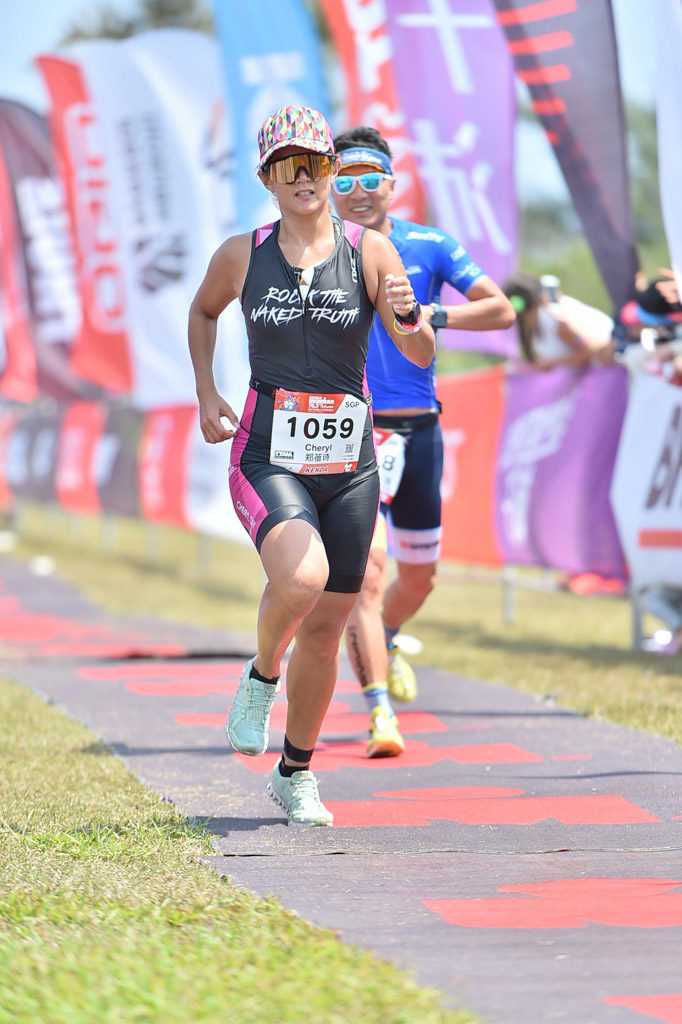 IRONMAN 70.3 TAIWAN 2018 IN DA BAG! I crossed the line, stopped my watch and saw that I beat my Phuket time 2 minutes plus, so that’s a PB. Considering the circumstances around this race, I will take this PB. Yay! 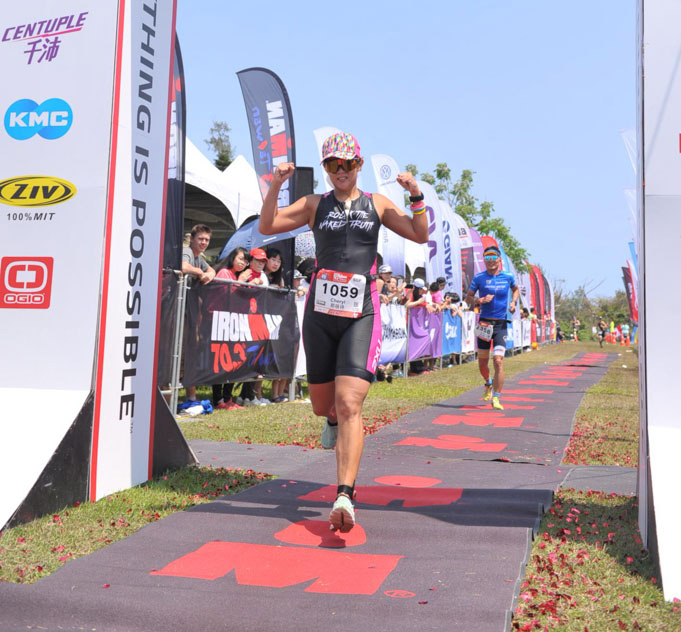 Here are my times at a glance: 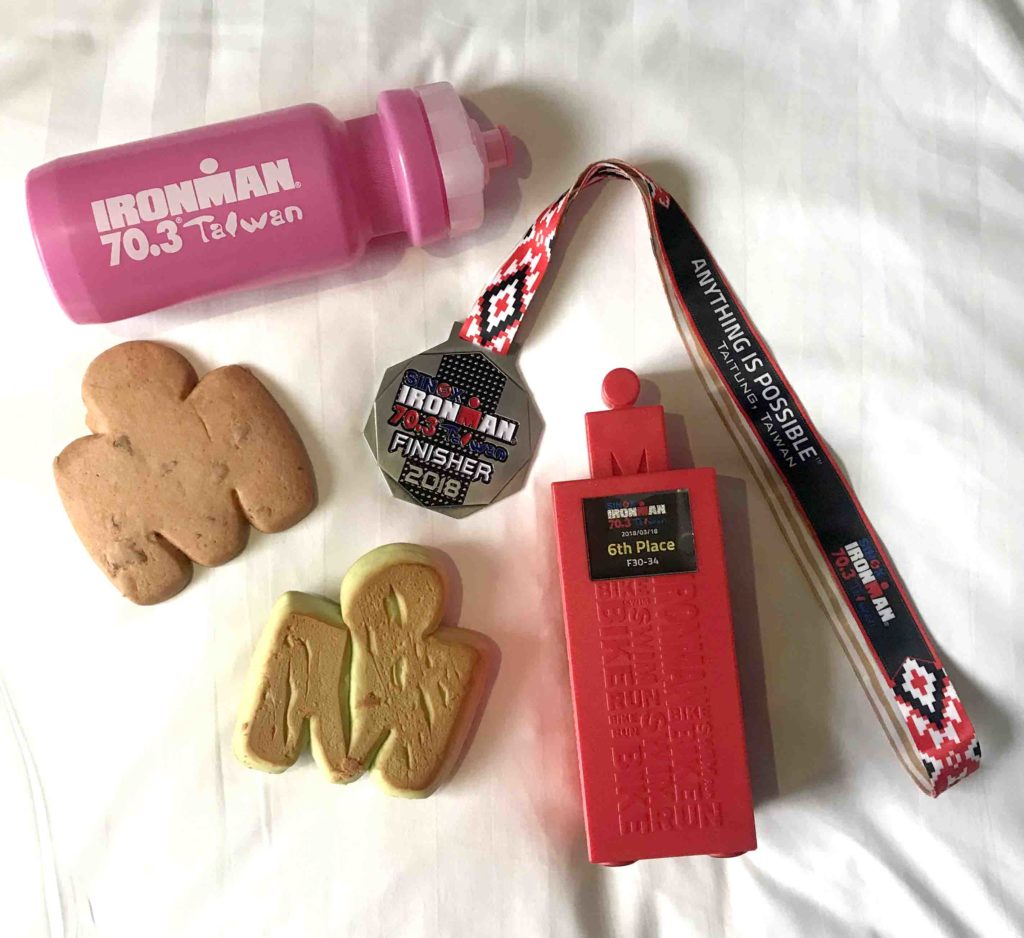 I missed 5th place by 45 seconds, DAMMIT. But I still got a trophy anyway so that’s awesome. No luck at the world championship roll down though – only one slot for my AG and the Japanese lady in third place took it. The 35-39 AG had two slots and the second one rolled down to 31st because no one wanted it. AHHHHH GIMME LAH!! Oh well, fight again another day.

Triathlon is an individual sport that can get lonely at times, thus it takes a good support network to keep you going. I just wanna say thank you to those who said hi to me on the course (sorry if I didn’t really respond cause I was trying not to die haha), to my mum and auntie for coming out to support me at this race, to my friends and family back home, to my coach Colin for guiding me and working with me, to 2XU Singapore for the custom trisuit and the wetsuit, to the new friends I made at this race who made me laugh so much, to all the volunteers and spectators who made the race possible and fun and smooth, and of course to my rock Emmanuel for sacrificing sleep (in a diff time zone) just to track my race. Also a big thank you to all of you here in this IG community for following me on my journey to insanity.

Next up – Ironman 70.3 Danang, in 7 weeks. But first, I’m going to Bali for a break hahahahahahahaha!