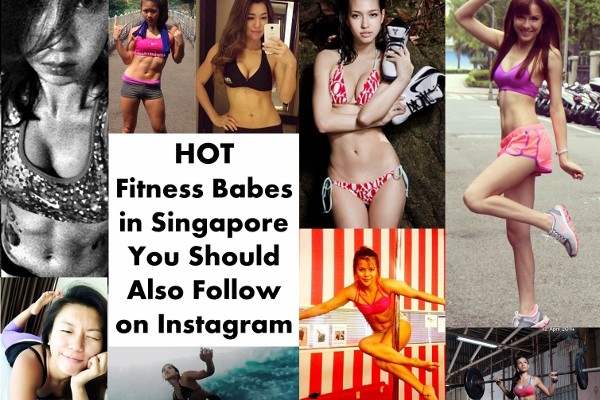 Just one list of the eight hottest fitness babes in Singapore is not enough right! So, to the delight of you guys out there (you know who you are LOL), I have come up with another list of HOT fitness babes in Singapore that you should also be following on Instagram! These ladies have the looks, the bodies, the popularity and are very dedicated to their passions in fitness or work in the fitness line. Please show them more love!

How can anyone not like this sweet-faced 21-year-old Singaporean singer-songwriter and actress? Born in Australia to a British father and a Chinese Singaporean mother, Ming has been singing and acting from as young as 13, and has cut three albums thus far. Last year, she bagged two awards – Best Local Singer and Best Local Album (Ming Day) at the Singapore Entertainment Awards 2013!

When you look at Ming, it’s hard to believe that she has been suffering from binge eating disorder. She confessed in a post on Facebook in July and shared her struggles, as well as hoping to help others who are facing the same challenges. Right now she is on a mission to recover her health and natural weight, and she is a complete fitness addict, hooked on boot camp which is a lot of HIIT (high intensity interval training). By the way, her sister Bianca is pretty hot too! 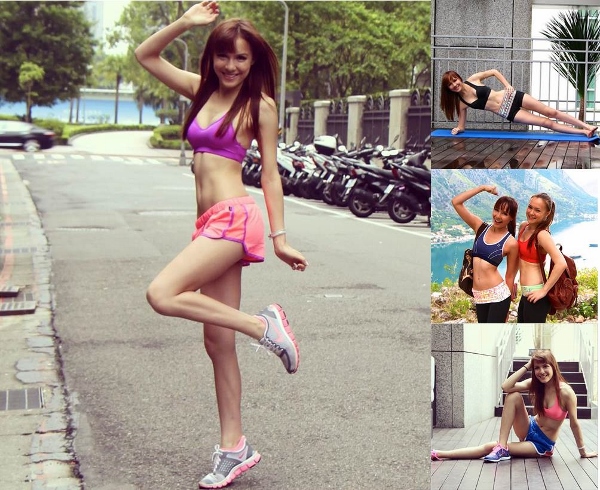 “Am QueenBarbie”, it says on her Instagram profile, and hey I’m not refuting that. The ample bosom and small waist is proof! But before you start going on about the unhealthy proportions of Barbie, take a look at Caxsandra’s abs (plus the V-line). You can’t find those on Barbie! Those are a result of Caxs’ hard work in the gym with weights, as well as her kick-ass Muay Thai. A former student of Evolve MMA where she was training Muay Thai and Brazilian Jiu-jitsu, her Instagram posts suggest that she is still training in Muay Thai but with no clue where. 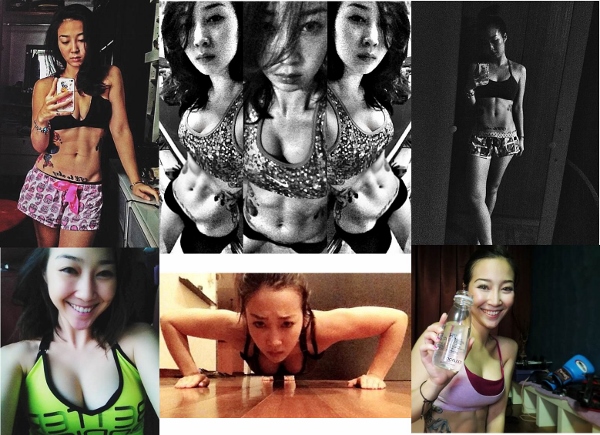 Of Taiwanese and Italian ethnicity, Liv Lo became a top model in Taiwan – where she was born – by the age of 20 and then moved to Japan where she became a hit in the fashion industry, fronting covers in lingerie, lace and cotton. Liv has been living in Singapore since August 2012 and you might remember her in Mediacorp Channel 5’s drama ‘Point Of Entry 4’. Fluent in English, Mandarin and Japanese, she is also a yoga instructor and founder of StretchCity.com, a yoga-inspired website which lists yoga studios, organic restaurants, events and promotions related to wellness and eco-living in Singapore. After looking at her pics and her to-die-for figure, I have a sudden urge to pick up yoga again. LOL! 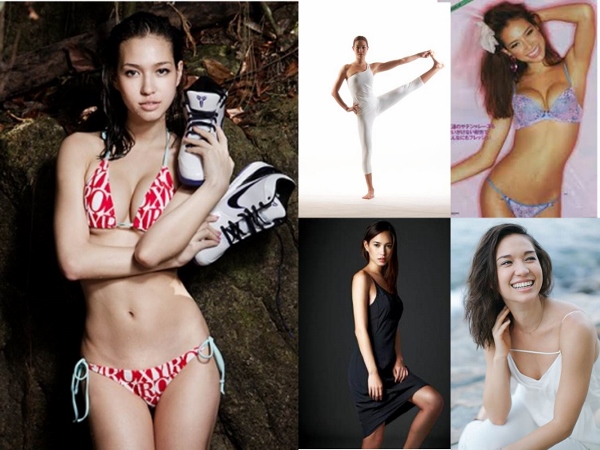 “What does your weekly fitness regime consist of?” I asked Mel Tan. Simple – just pole fitness and rock climbing. No, not pole dancing in nightclubs you dirty-minded fella, but the really challenging pole fitness trend which is picking up quickly in Singapore. You might recognise her from FHM Girl Next Door 2013; while she walked away from that empty-handed, she has landed a bigger prize now as one of Asia’s largest mixed martial arts (MMA) organisation ONE Fighting Championship’s official Ring Girls.  She has the boobs, the ass and the fit, healthy, toned body that many of us want! Now where do I sign up for pole fitness? 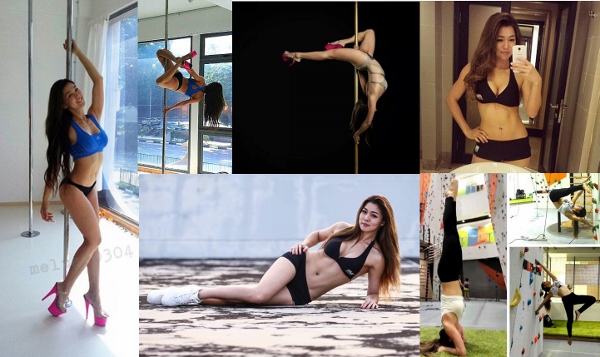 The BFF of Limaran Agustina, Jasmine is also a personal trainer and you can find her coaching her clients at The American Club or Sky Fitness at Harbourfront. Born in Malaysia but raised in Singapore, the 25-year-old is of Portuguese and Thai heritage – did you guess right? Not afraid of lifting weights, you can find her getting her fix at CrossFit Singapore, on top of her own gym routine. Jasmine adores her dog Simba to bits and is also capable of baking up a storm. 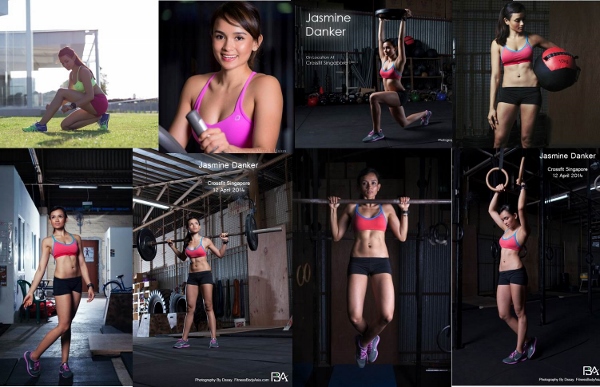 Newly-crowned Miss Earth 2014 Sylvia Lam – who also bagged Miss Body Beautiful in the same pageant – is an avid sports person who loves things like kayaking, swimming, basketball and mountaineering. A personal trainer and yoga instructor at Aileron Wellness, she has completed summit expeditions to Mount Kilimanjaro in Tanzania and Mount Kailash in Tibet. Sylvia enjoys functional training in the gym, as well as yoga and meditation on a daily basis. 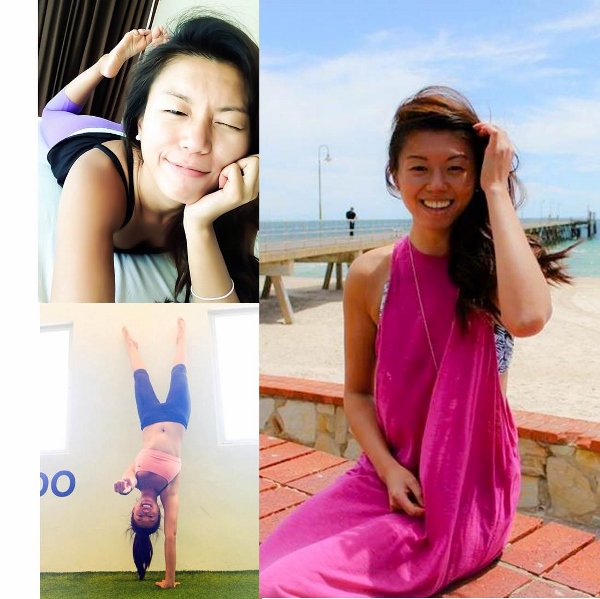 This little chilli padi here is a purple belt in Brazilian Jiu-jitsu (BJJ), after picking up martial arts because she wanted to protect herself. She started out in boxing but tried BJJ (first learnt in 2008 in Manila under Deftac Ribeiro’s Alvin Aguilar) and then fell in love with it. The 31-year-old Filipino (with a dash of Chinese and Spanish) moved to Singapore two years ago to study and be with the husband, then decided to try something “girly” to balance out the male-packed activities in her life. An interesting mix it is – BJJ and pole – and Jana proves that they go well together. She has taken a hiatus from pole to concentrate on BJJ, but will be back soon enough, as she juggles her job in Asia’s best mixed martial arts academy. 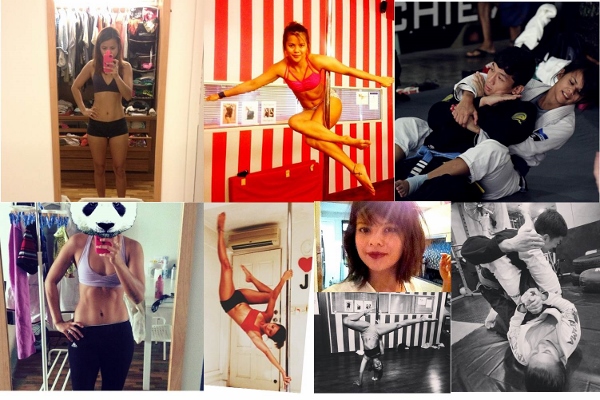 Currently an instructor at Surfset Singapore (a  unique fitness programme inspired by surfing and stand-up-paddling where one does exercises on an actual six-foot-long surfboard perched 11 inches off the ground), Gillian, or Jilly as she is more commonly referred to, has always been a sporty girl. Wakeboarding, inline skating, surfing, floorball, flowriding; she does them all. The 27-year-old Peranakan Chinese had a stint on ClickNetwork.tv with Paul Twohill for Chicks & Dicks, and in her younger years, was part of FHM Girl Next Door and SingTel Grid Girl. An illustrator and graphic designer by profession, she can play the guitar and piano too. 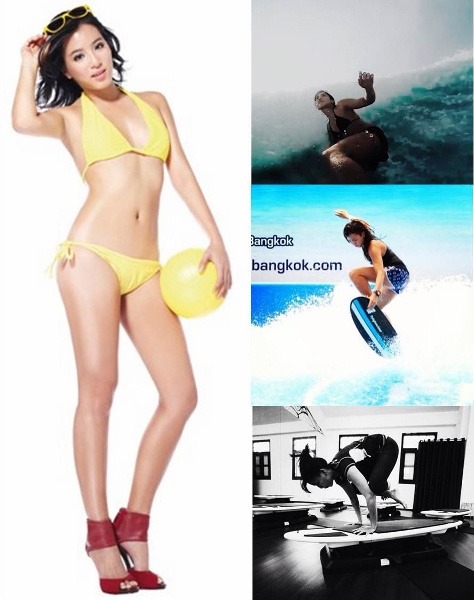 Undergraduate Georgina Poh’s Instagram (which has 108k followers now) is full of workout videos, which shows her doing pull ups, climbing ropes, lifting weights and more. The 1.70-metre tall Optimum Nutrition sponsored athlete does not count calories and does not limit herself to how many cheat meals she has a week. She just keeps a simple rule –  no eating later than 8.30pm on weekdays and 9.30pm on weekends. Georgina is super girly as well, sporting new manicure designs and making the effort to dress up when she goes out. 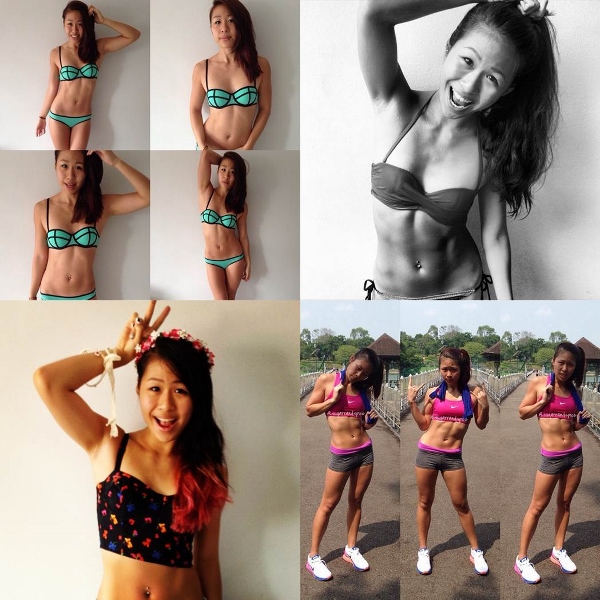 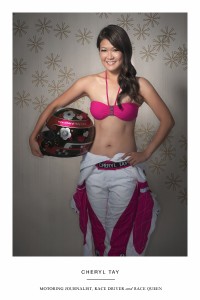 Cheryl Tay (@cheryltay11)
A journalist, photographer, blogger, Cheryl is a huge fitness freak too. She started writing about cars and motorsports, before moving into fitness and most recently is building her passion for fight sports. Besides hunting for hot girls to feature on her blog, she is also a regular fitness writer for Yahoo! and enjoys lifting weights, running and Muay Thai.