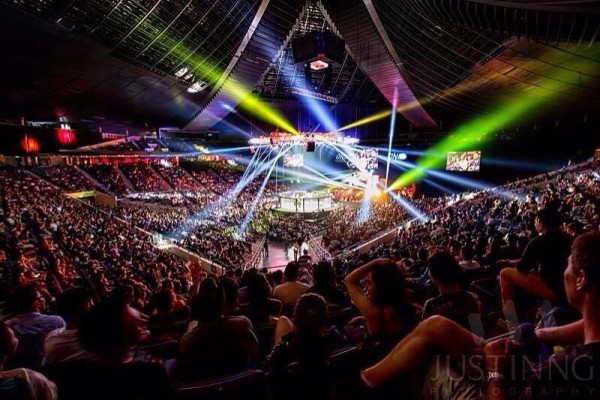 Mixed martial arts (MMA) is the fastest growing sport on the planet for the simple reason that people like to see a fight – and the less rules and restrictions on the action the better. When a scrap breaks out – be it in a schoolyard, a nightclub or on the streets – everyone will immediately drop what they are doing to run and watch.

It’s an integral part of human nature and anyone who regularly watches world championship boxing matches on the television will know that when a fight starts in the crowd, the entire audience will take their eyes off the skilled protagonists in the ring to check out the action among the drunken idiots in the cheap seats.

People want to see a no-holds-barred-anything-goes fight but deep down they don’t want to see anyone getting seriously hurt or killed and this is where MMA comes in. It’s as close to the real thing as you can get, with enough rules and regulation to ensure no one ever sustains injuries of a life-threatening nature.

Nowhere has the recent surge of interest in this relatively new sport been more dramatic than in Asia.

Four years ago you would have struggled to find someone on a street in Singapore who knew what the three letters ‘MMA’ stand for, but now it is in national newspapers and on major TV networks on a daily basis. This is largely due to the vision and drive of long-term MMA fan Victor Cui.

He is the Chief Executive Officer of ONE Fighting Championship (ONE FC) and from its headquarters in Singapore, this organisation has spread all over the continent.

The first ever ONE FC show in 2011 attracted a sold-out show at the Singapore Indoor Stadium and since then, Cui’s team has gone on and held events in Jakarta, Kuala Lumpur, Manila, Taipei, Dubai and Phnom Penh, as well as securing an unprecedented 10-year broadcast deal with FOX Sports.

People like to see a fight, that’s something Cui realised many years ago and he thinks that there can be no purer form of combat than MMA.
“MMA captivates the audience like no other sport in the world. Whether you are a seasoned veteran of the sport or watching it for the first time, it will take your breath away with its sheer athleticism and skill,” Cui explained.

“ONE FC events draw in such a diverse crowd from teenagers to couples to families. It is the fastest growing sport in the world and if we continue on the current trajectory, ONE FC will become the biggest sports media organisation in the world,” he predicts.

When you think of the sports which people love to watch, most of them have been around for longer than the likes of you and I. Football has been played in some form or other since the middle ages and even though Formula One wasn’t founded until 1950, people have been racing around in cars since virtually the invention of the combustion engine.

MMA might bear some similarities to the ancient Olympic discipline of Pankration but it is a comparatively new sport and Cui thinks that has helped ONE FC enjoy steep growth.

He elaborates, “The rapid progress that ONE FC is making has exceeded even my expectations. In three years, ONE FC has more than 90 per cent of the market share in Asia with a global audience of millions tuning in to every event. We are getting calls from interested investors and potential partners every day who are excited to be a part of the movement.”

Historically the top fighters have always gravitated towards the bright lights of Las Vegas with the Nevadan gambling Mecca virtually guaranteed to play host to the big money matchups and marquee names.

It means that in the past, fans in Asia wanting to watch a really big fight have been forced to sit down in front of their television sets on a Sunday morning, not a time traditionally associated with watching sport. However there are signs of a shift from West to East with arguably boxing’s biggest star, Manny Pacquiao, set to fight in Macau for the second time later this year.

Add to that – ONE FC has signed some of the biggest names in MMA and brought them to cities across Asia.

“We have some of the greatest mixed martial arts stars on our roster, such as Ben Askren, Bibiano Fernandes and Shinya Aoki. The top fighters in the world want to compete in ONE FC when they see and hear how we have the best shows, the best crowds to fight for. They want to be a part of it,” he said simply.

The three named fighters are undeniably the best pound-for-pound mixed martial artists in the world and two of them, Askren and Aoki, fight out of Evolve MMA in Singapore which is universally recognised as the premier training facility in the region.

Having so many world-class fighters on its doorstep has certainly given ONE FC a head start but when Evolve MMA first opened its doors in 2010, it was with a view to make martial arts available to everyone in Singapore rather than producing elite level athletes as founder Chatri Sityodtong explained.

“Martial arts have been my greatest passion in life ever since I was a child. It changed my life by giving me confidence, courage, mental strength, a warrior spirit and a desire for continuous self-improvement. Evolve MMA is my way of giving back to the world because I truly believe that martial arts is the greatest platform to unleash human potential.”

Askren and Aoki both hold the prestigious ONE FC Welterweight and Lightweight World Championship titles but they are not the only members of the Evolve MMA fight team to enjoy success with Asia’s most prominent promotion. The likes of Herbert Burns, Eddie Ng, Leandro Ataides and Jake Butler are also quickly establishing themselves as top contenders in their respective divisions.

With ONE FC attracting tens of thousands of people to its shows with a live broadcast on a major sports network, it has certainly introduced more fans to the sport of MMA but there has also been a knock-on effect in terms of people looking to train in martial arts.

Nothing could be more inspiring for a prospective martial artist than the sight of Askren executing a trademark slam or Aoki finishing a fight with one of his explosive submissions and a surge in interest in studying the various aspects of the sport led Sityodtong to set up a third branch of Evolve MMA.

There are already Evolve MMA campuses in Far East Square and the POMO Mall but the brand new facility in Orchard Road, which is set to open later this year, brings MMA to the heart of Singapore’s shopping and entertainment district for the first time.

“Evolve MMA is Asia’s top martial arts organization,” Sityodtong added. “We offer the best martial arts instruction available anywhere in the world and Orchard Road is a natural extension of our world championship mindset of giving our students the very best experience in the world.”

There can be few countries where people are more committed to watching televised sport than they are in Singapore but until recently there were precious few opportunities to watch elite level athletes compete in the flesh, let alone to train under their tutelage.

Now thanks to the vision of these two entrepreneurs, fight fans in Singapore don’t just get the chance to see the likes of Askren and Aoki do battle in the cage at a ONE FC event, they also have the opportunity to be instructed by the best at Evolve MMA.

Think about it – the closest glimpse you will get of the English Premier League is when teams come to town for a meaningless pre-season friendly and Formula One only happens once a year, but MMA is accessible in Singapore all year round and that’s why this sport has taken, not just the Lion City, but the entire continent by storm.