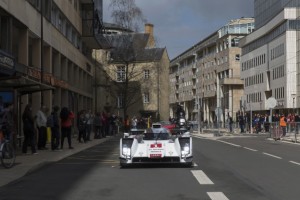 Audi began the 2014 WEC season with a spectacular appearance. The new Audi R18 e-tron quattro did not do its initial kilometers at Le Mans on the legendary race track in Western France but in public traffic. Audi factory driver Tom Kristensen, with nine victories under his belt the record holder of the Le Mans...