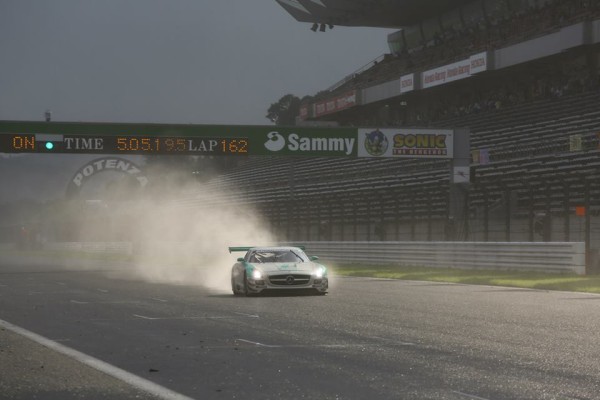 Just three weeks after the third round in Motegi, the Super Taikyu Series 2013 headed to Fuji Speedway for its fourth round, the longest race on the calendar. There was some last-minute drama at the five-hour Motegi race, causing the PETRONAS Syntium Team’s Mercedes-Benz SLS AMG GT3 #28 to lose its lead to sister car #1. As if that wasn’t enough, the seven-hour Fuji race was filled with a lot more drama… 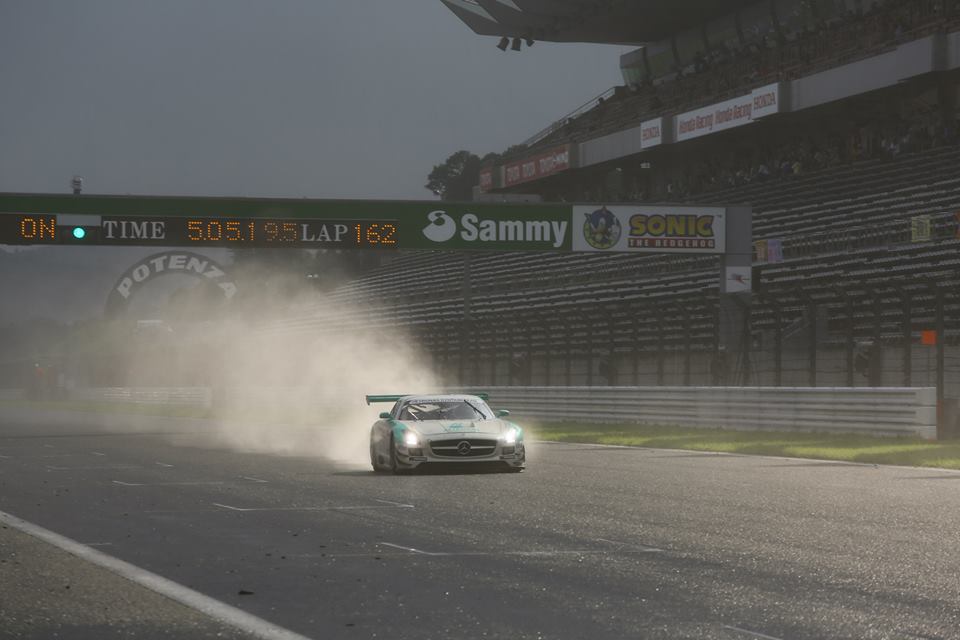 I usually meet up with the rest of the PETRONAS Syntium Team drivers at the airport first, since we fly in from different countries. The drivers come from Malaysia and New Zealand, while I’m from Singapore. This time the party was bigger, as Jono Lester’s father and Dominic Ang’s parents came down for this round too. While we were gathering at the airport, we were suddenly approached by a TV crew from a local variety show and we let Jono and Melvin Moh entertain them. The host wasn’t a fan of motorsports so he took a while to understand what Super Taikyu was. 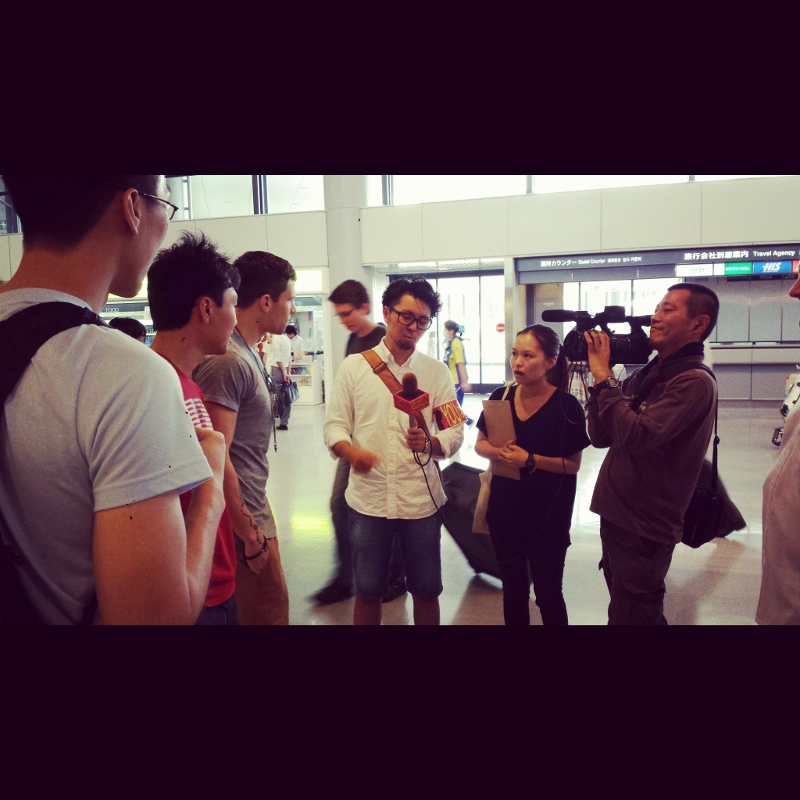 Owned by Toyota Motor Corporation, Fuji Speedway is not far from Tokyo city, but it was some holiday for the Japanese that same weekend so we were stuck in traffic. 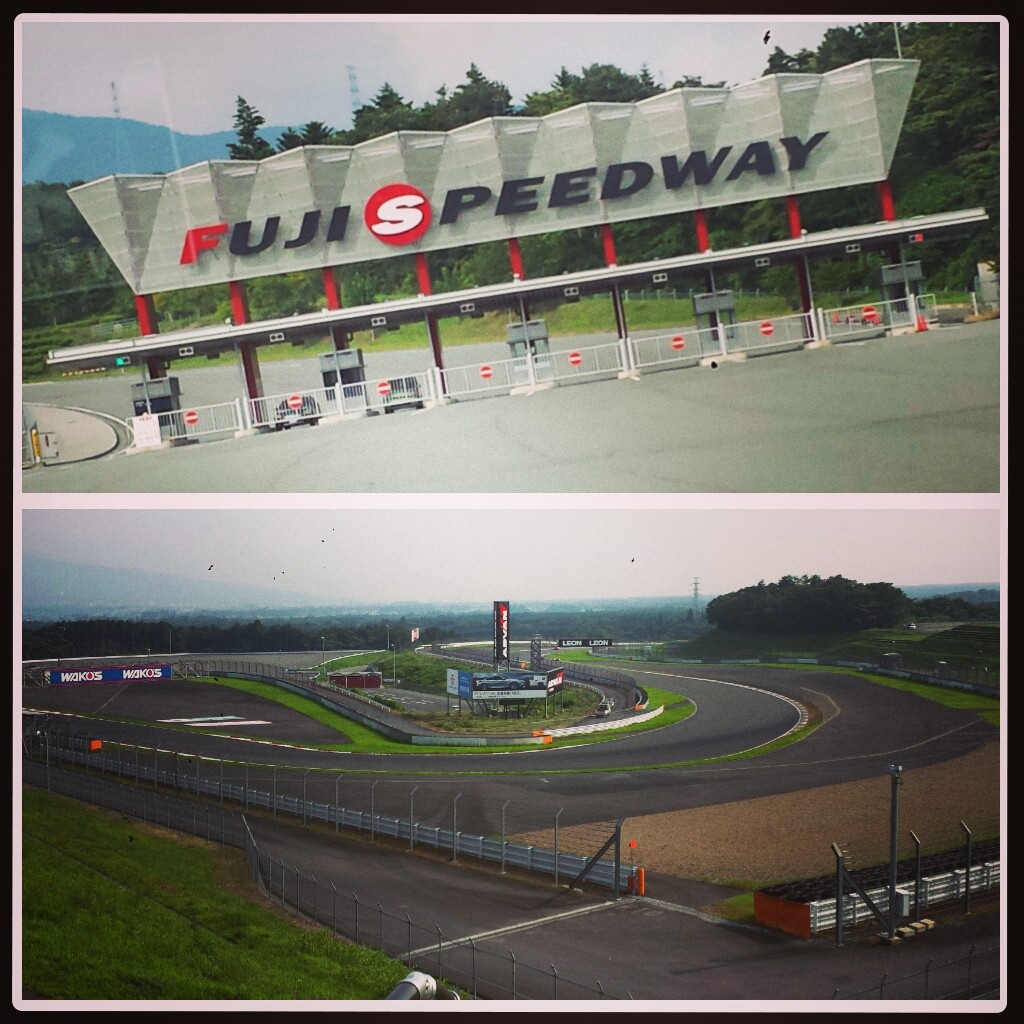 We finally got there and teams were still setting up, so I went to walk around the track, checking out the souvenir shop like I always do. There was a good selection of official Formula One merchandise as the track used to host the sport and my sharp eyes would never miss out Hello Kitty! The Hello Kitty race queen doll in the top left corner looks weird though. 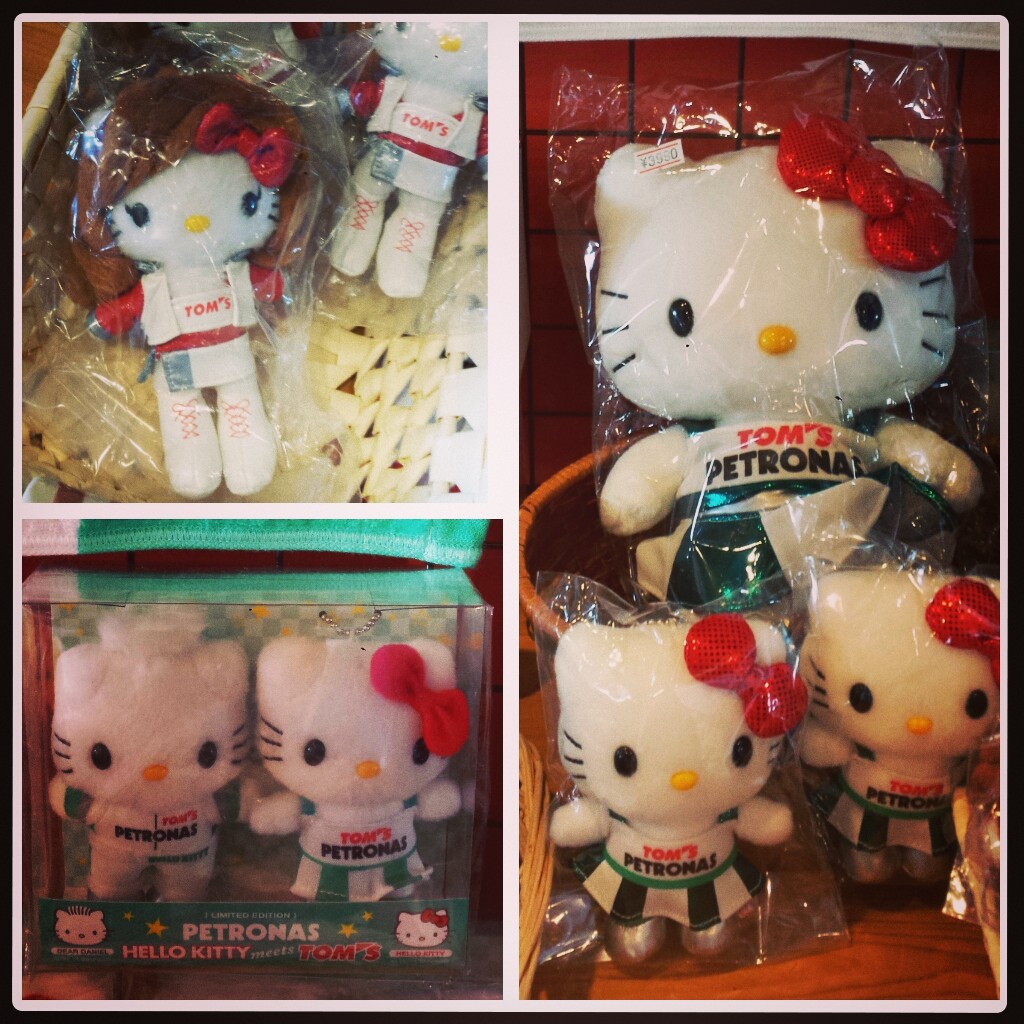 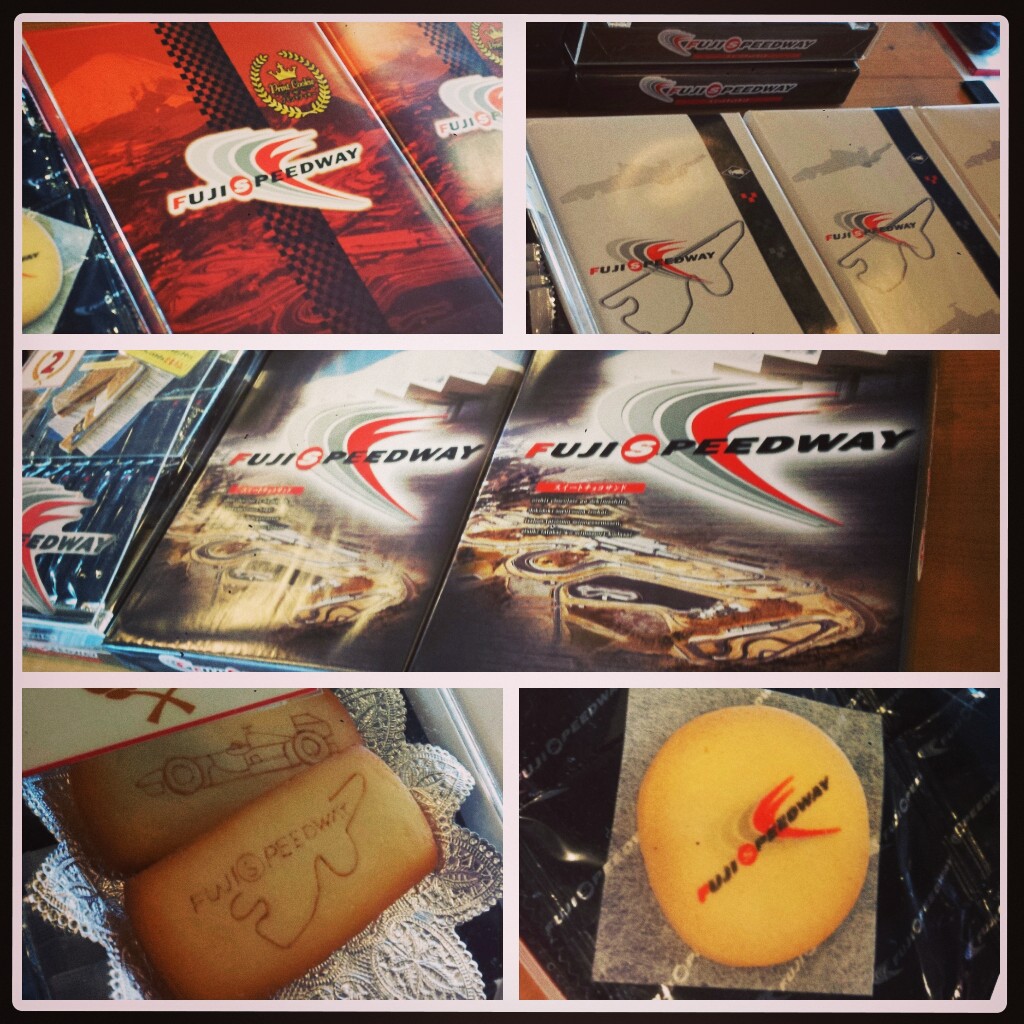 Thursdays at the track are more relaxed, as the cars are unloaded and teams go about setting up shop. Nobuteru Taniguchi was there with his wife and pet dog called Wanko (much to the delight of many who couldn’t help chuckling at this name). 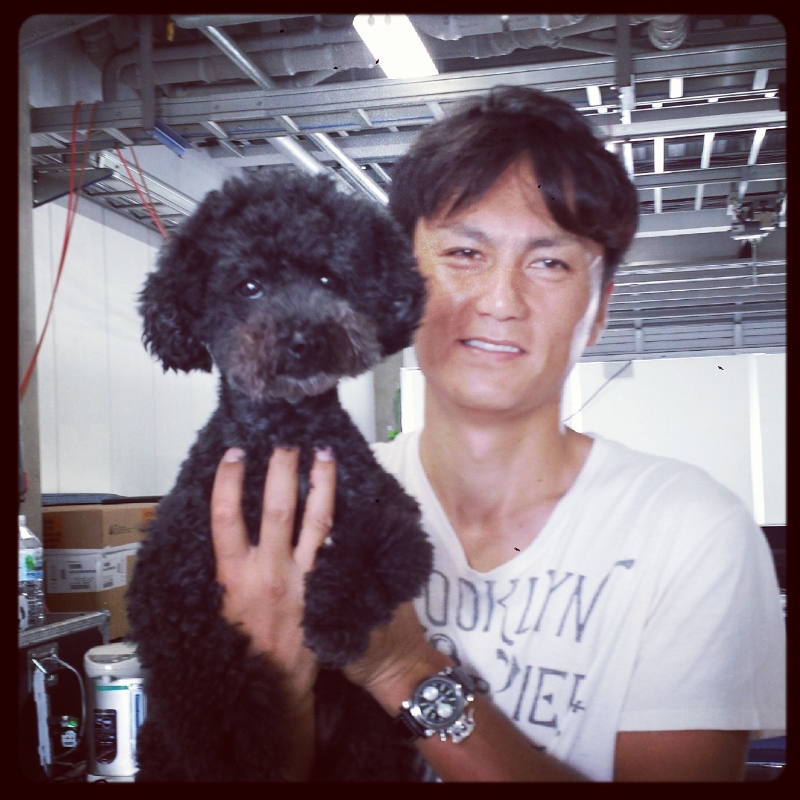 That same weekend, there was a one-make GT-R race as well, flooding the track with much ‘Godzilla’ power. 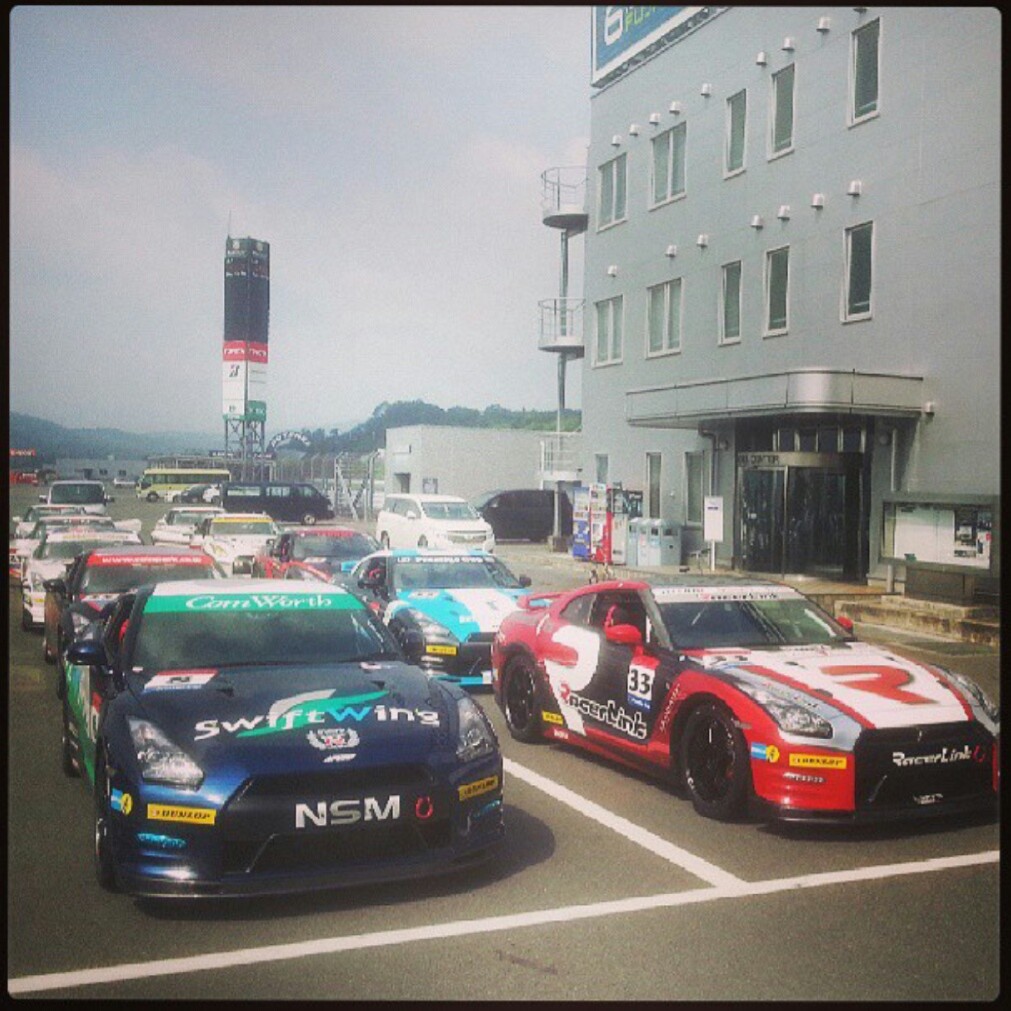 Located just a short drive away from Fuji, we went to Gotemba Premium Outlets for a little bit of shopping in the evening and all I checked out were the sports brands. Fariqe Hairuman’s wife and daughter came up for this round as well and they got a decent loot of toys at good bargains! 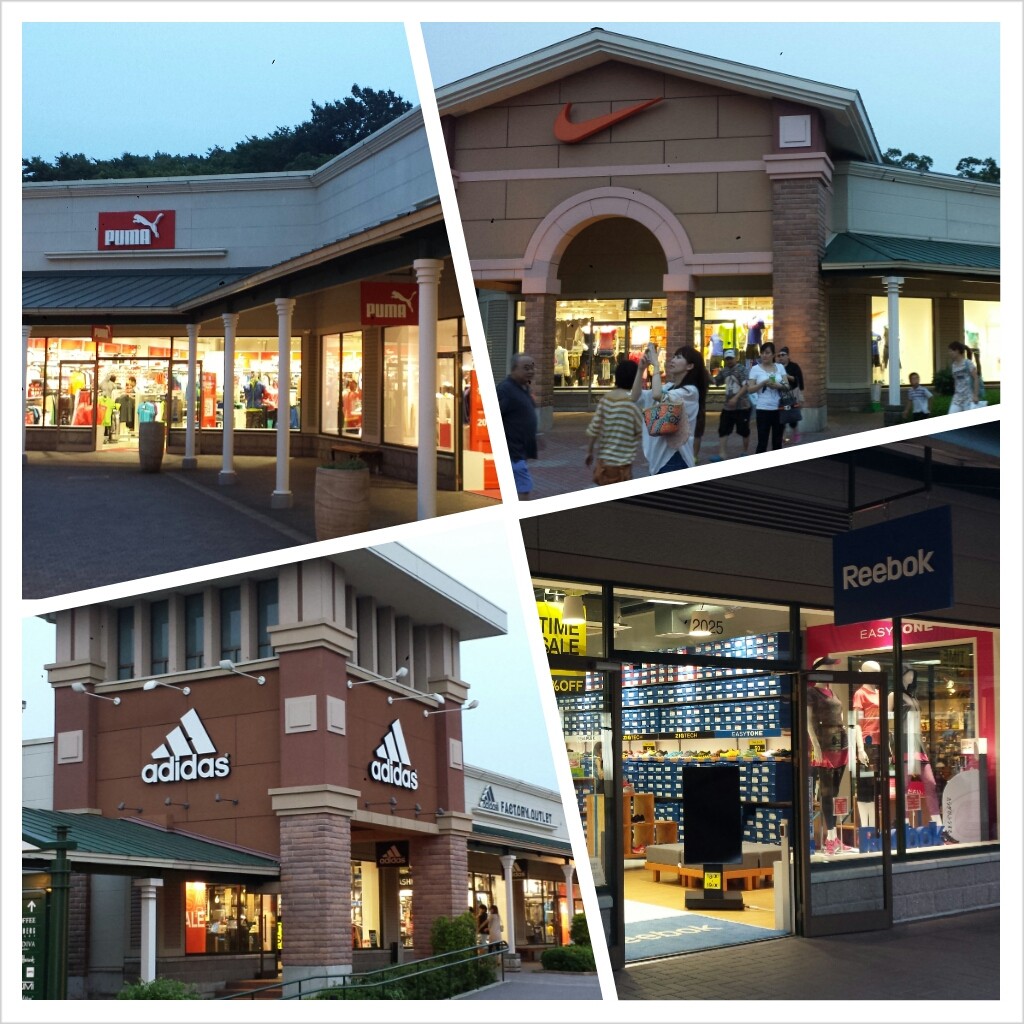 The weather was good on Friday and Saturday, with blue skies and fluffy white clouds. 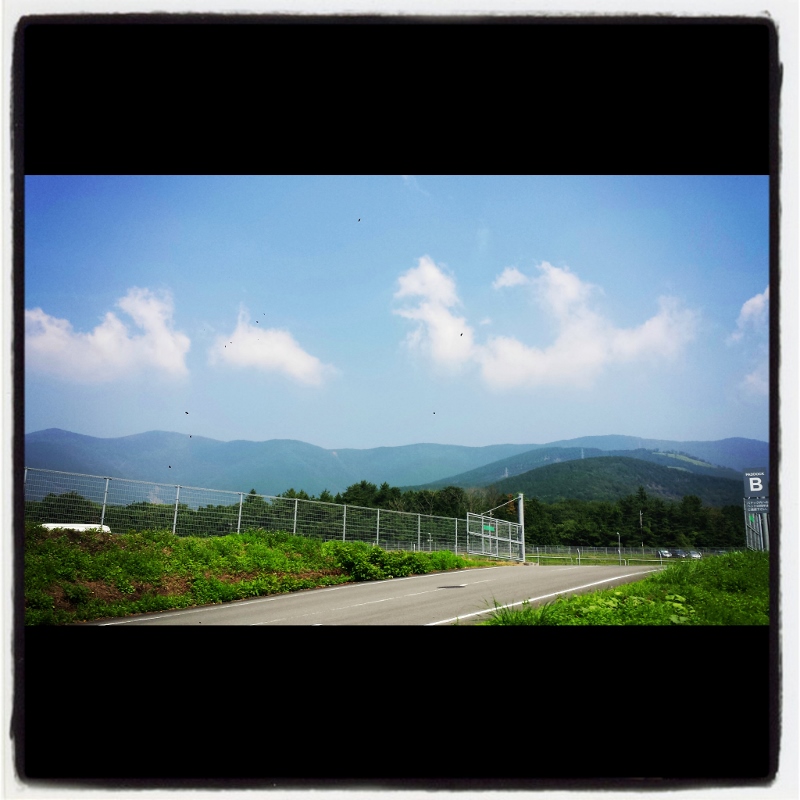 The GTNet Advan Nissan GT-R #81 and ThreeBond Nissan Technical College Nissan GT-R #24 were fastest in practice, with their usual outright speed and it was not surprising that they occupied the front row once again.

The combined fastest lap times of Taniguchi and Dominic put the Mercedes-Benz SLS AMG GT3 #1 on the second row, qualifying third behind the GT-R #81 and the GT-R #24. 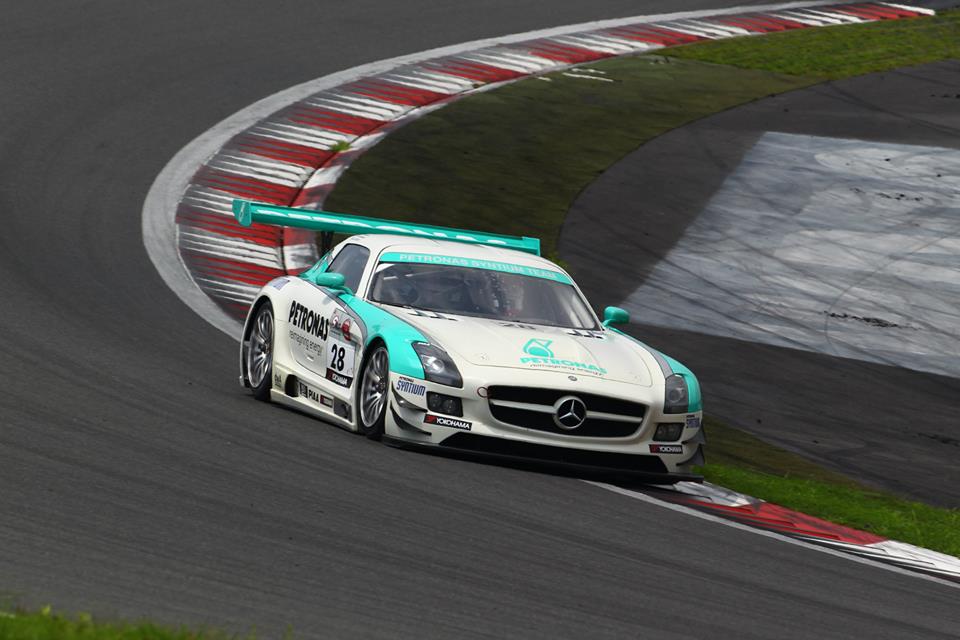 Sister car #28 initially qualified in fourth with the combined times of Tatsuya Kataoka and Jono , but a post-qualifying penalty dropped them to P8. Jono had crossed the white line upon entry into the pits, landing a four-place grid penalty. 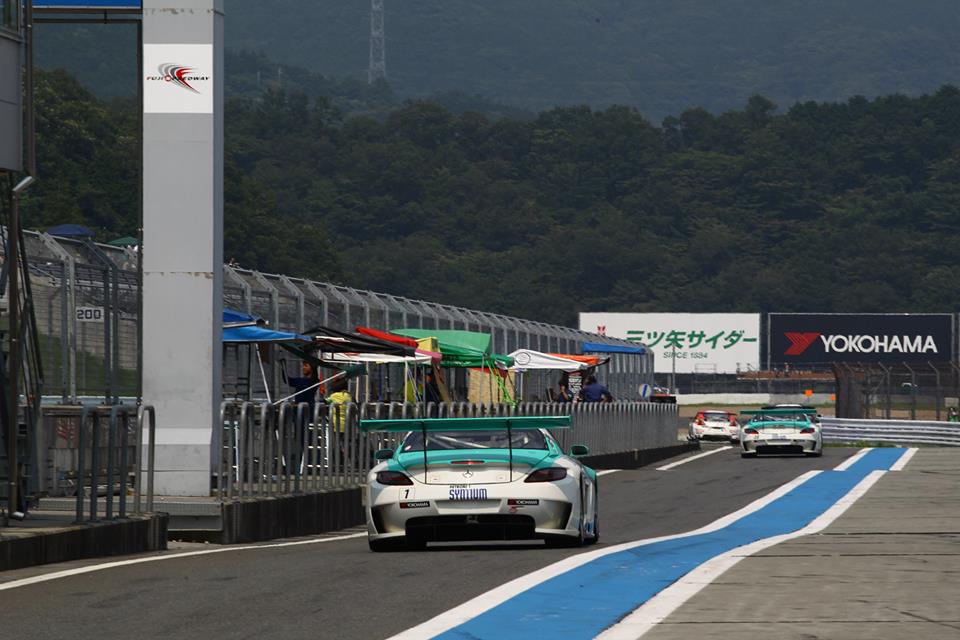 Race day Sunday has the most activity and the pit walk is really crowded with visitors wanted to get photos of the race queens. Some teams have their sponsors or partners giving out things and look at this advertisement for a restaurant! 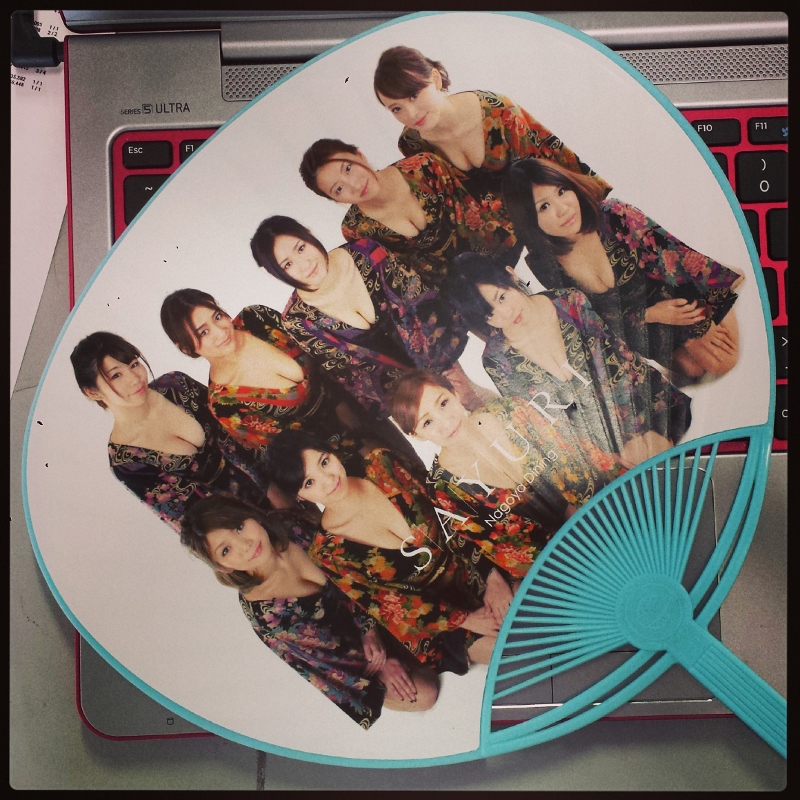 The race is a long one, but the PETRONAS Syntium Team was confident of winning the race. Atmosphere on the starting grid was easy, as the two SLS AMG GT3 cars lined up in P3 and P8. 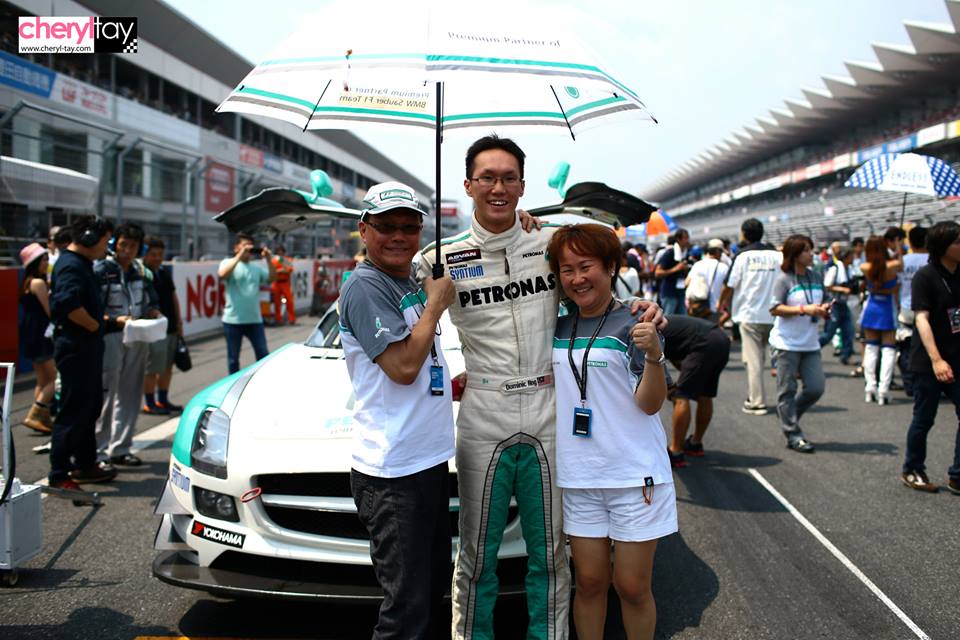 I also spotted Super Mario on the track! This marshal looked the part totally… 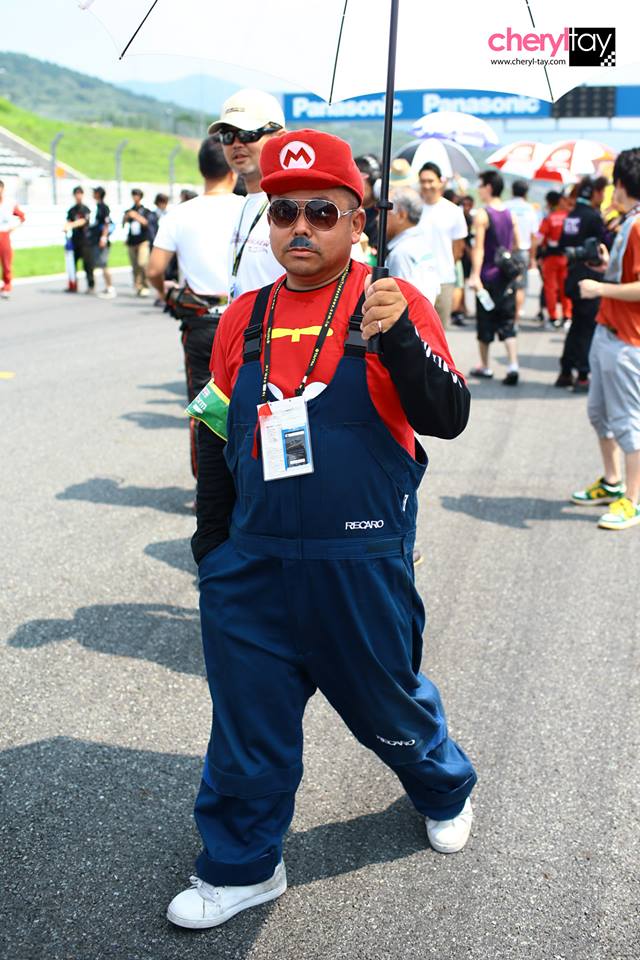 Then we had to clear the grid and it was RACE ON!

Into the first corner right after the race start of a busy 53-car grid, the Endless Advan Porsche 997 #3 got up to third behind the GT-Rs, cutting in front of Dominic in the SLS AMG GT3 #1. By the end of the first lap though, Dominic managed to get back in third place, whilst Kataoka brought car #28 to P5. Around the 40-minute mark, the safety car was deployed and race leader GT-R #81 took the opportunity to pit. On the restart, car #1 was up in P2 and car #28 in P3. 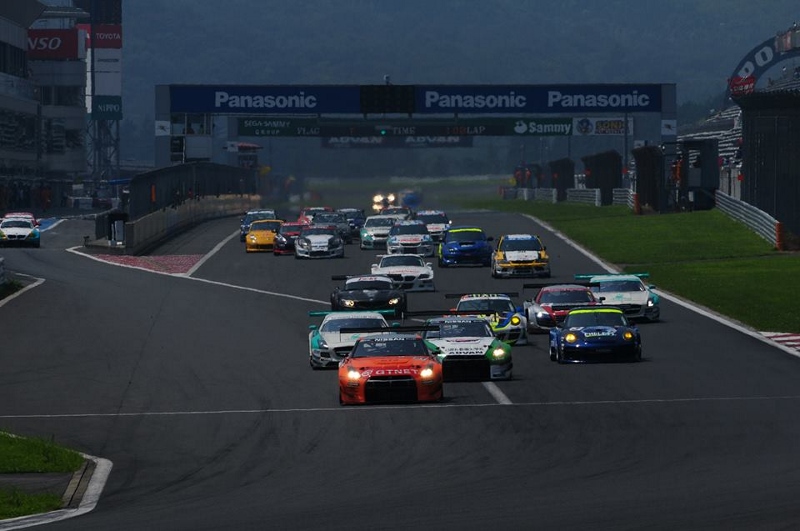 Leading the race at this point was the GT-R #24, before Kataoka went on a charge and overtook Dominic for P2, then kept biting at the heels of the GT-R #24. Around the one-hour mark, the GT-R #24 makes its first pit stop and Kataoka took over the lead for the rest of his stint. Handing driver duties over to Fariqe next, Fariqe rejoined the race in P2 behind the GT-R #81. Dominic also passed car #1 over to Melvin, who followed up in P3. 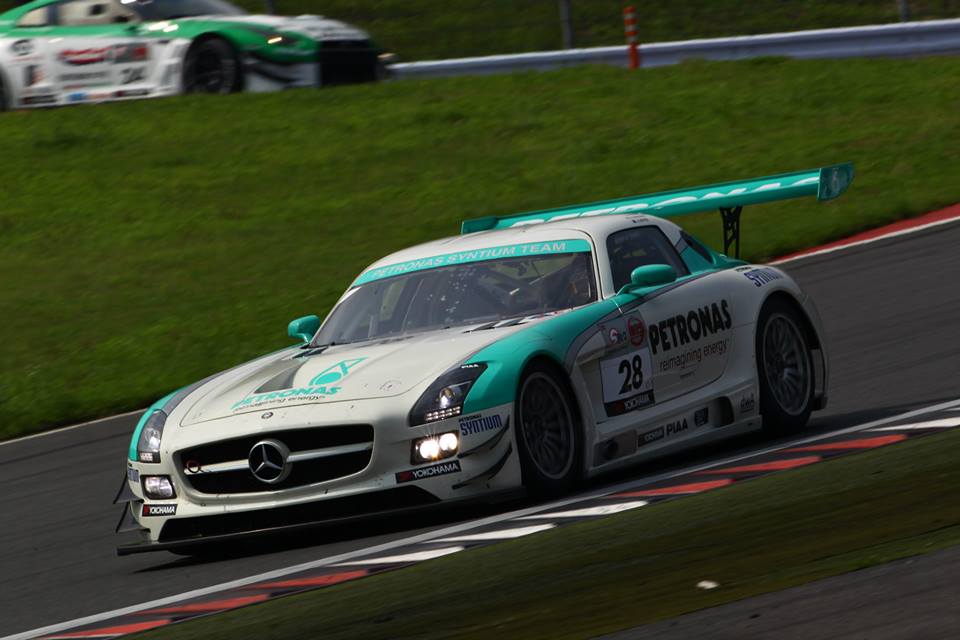 During this stint, the GT-R #81 made its second stop and put Fariqe in the lead with car #28. When the GT-R #81 went back out, it had to settle for P3 behind Melvin. As Fariqe continued to lead, Melvin got overtaken by the GT-R #81 and fell back to P3. 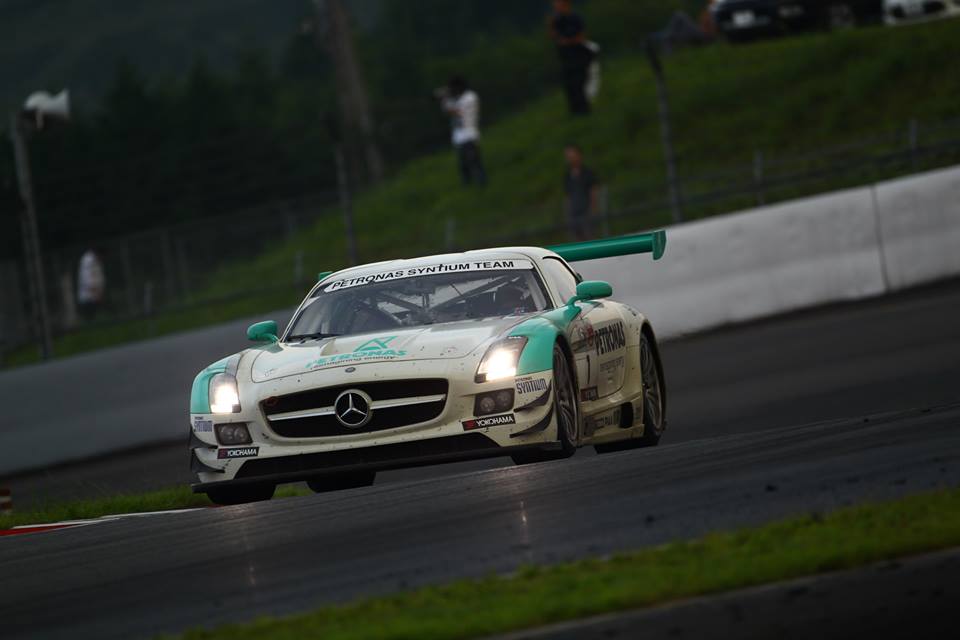 Ill fate then struck car #28 towards the end of Fariqe’s stint, when he spun and lost about 20 seconds, just before he was to come in for a pit stop. The streak of bad luck continued when Fariqe rushed off during the driver change to warn the team of a warning light in the car and an extra pair of hands was needed for the change, landing a 20-second stop-and-go penalty as a result. 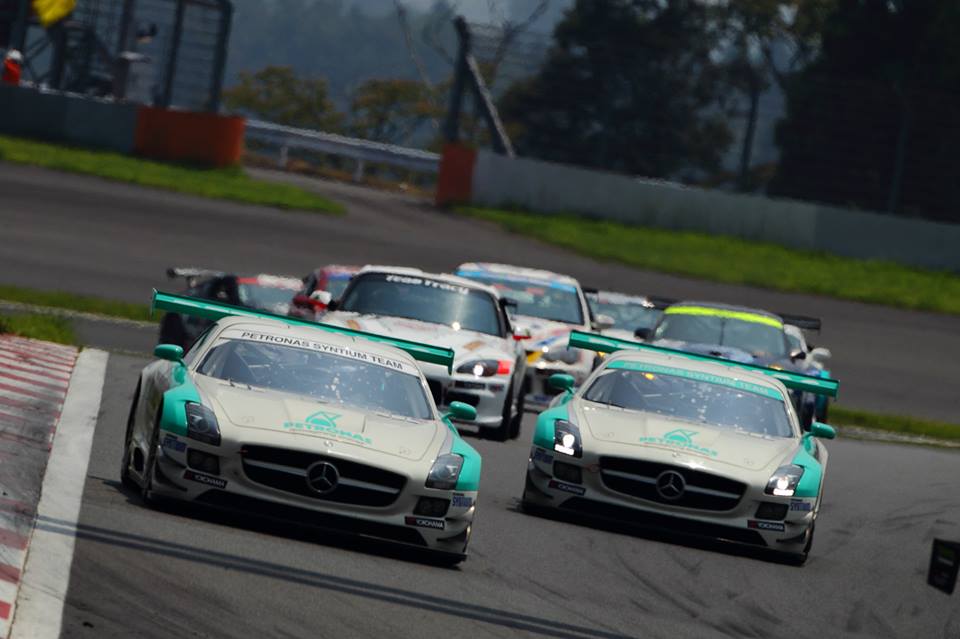 Jono went out in car #28 next and had to serve the penalty for Fariqe. That dropped him to P3 when he got back out. At this point, Taniguchi was at the wheel of car #1 and was in the lead after the GT-R #81 made its third stop and came back out in P2. Jono then overtook the GT-R #81 but disaster struck big time and car #28 had to come into the pits to fix a broken fan belt.

Overstaying in the pits for half hour, car #28 slowly dropped down the order whilst Taniguchi was pushing hard in car #1 to widen the lead to almost a minute at the four-hour mark. Dark clouds gathered and rain started to fall slightly, so car #28 took a gamble and sent Fariqe out on wet tyres. Dominic took over from Taniguchi after almost four and a half hours into the race, but stayed on slick tyres until the thunderstorm hit, before coming in to change the tyres. 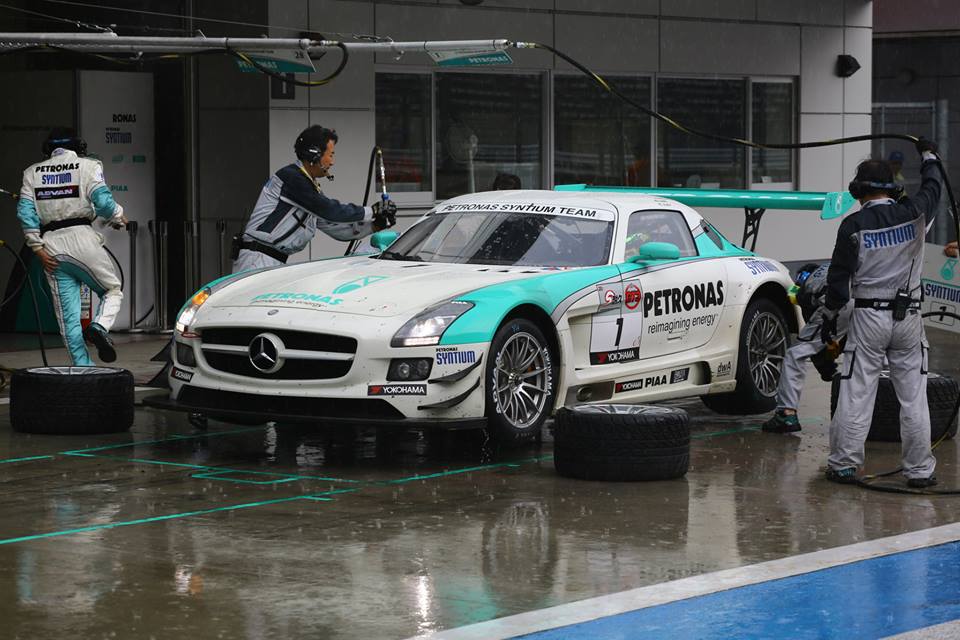 Fariqe initially struggled with the wet tyres on a slightly damp track and by the time rain fell hard, his tyres had worn out. About 12 minutes before the five-hour mark, he lost control on the straight and underbraked into the hairpin, finding the back of the car in the wall. Coming into the pits a few laps later to have the damage repaired, car #28 spent another 20 minutes too long. Fariqe went back out again but in their hearts, they knew that the fight for the win was long over.

Meanwhile, the GT-R #81 was closing in on Dominic, taking the lead from him. But nearing the end of this second stint of his, Dominic fought back for the lead, before passing the car over to Melvin for the final stint of the seven-hour race.

Pressure was on Melvin to take the chequered flag first, as he went out with a 65-second lead over the GT-R #81. That gap was increasingly getting reduced as the GT-R #81 pumped in quicker lap times than Melvin. As the finish line drew near and the lead was shortened, nerve-wrecking tension ran high in the team when all of a sudden, the GT-R #81 ran into trouble in the last five minutes and had to crawl to the end. That gave Melvin an easy road home for the win. 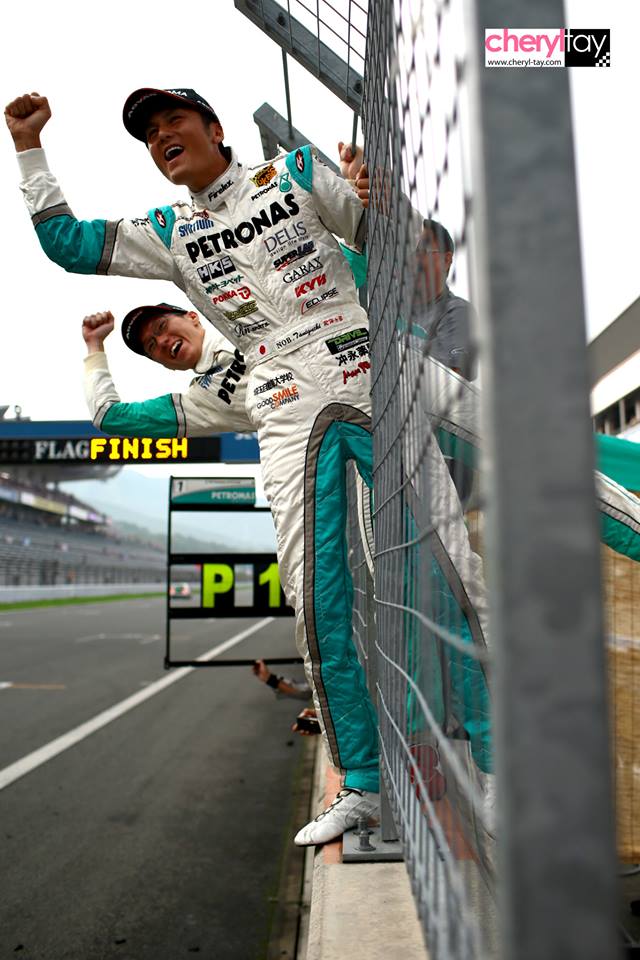 Faced with one setback after another, car #28 simply finished the race and brought the car home safely. 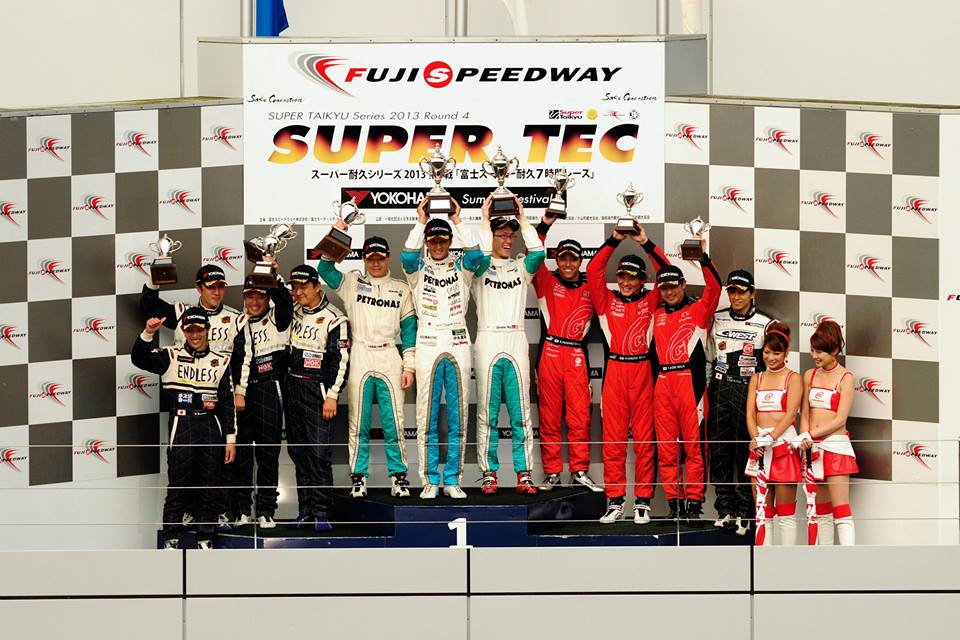 It was weird not seeing both all six PETRONAS Syntium Team drivers on the podium! As the overall championship will be based on five of the best of six rounds, this will probably be the round to drop for car #28. 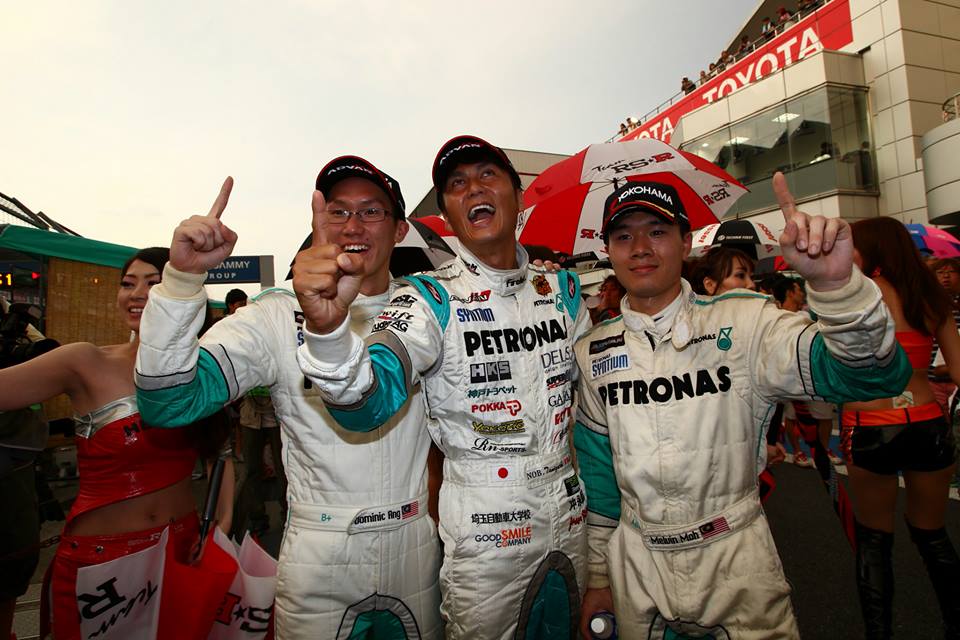 Taniguchi looked really happy, probably relieved that they got through the long race well. By the way, he is a big golf enthusiast and when he wasn’t driving, he was reading golf comics or practising his golf swings in the pit. 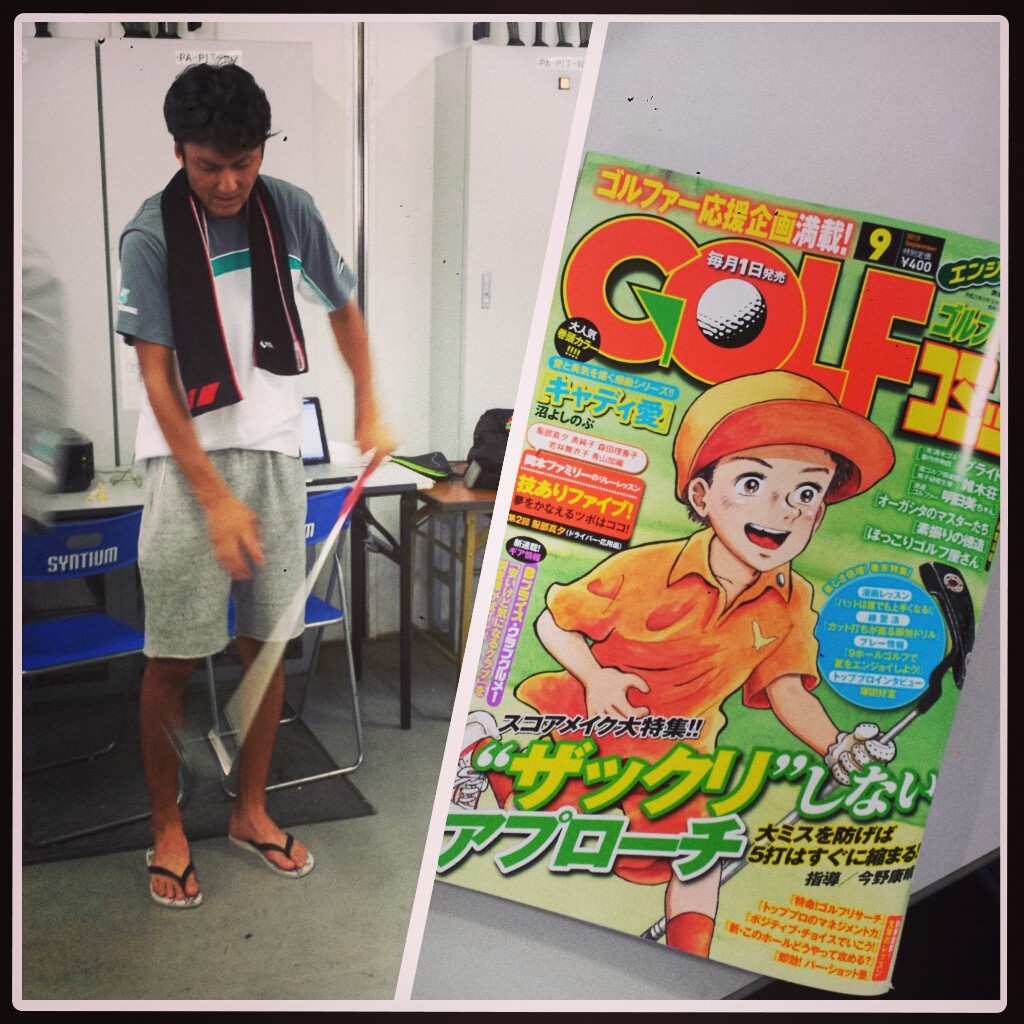 Of all the tracks the Super Taikyu Series goes to, Fuji Speedway is the nearest, hence the team gets more visitors than usual. PETRONAS Syntium Team manager Gen Suzuki’s daughter took a train out to join in the fun as well! 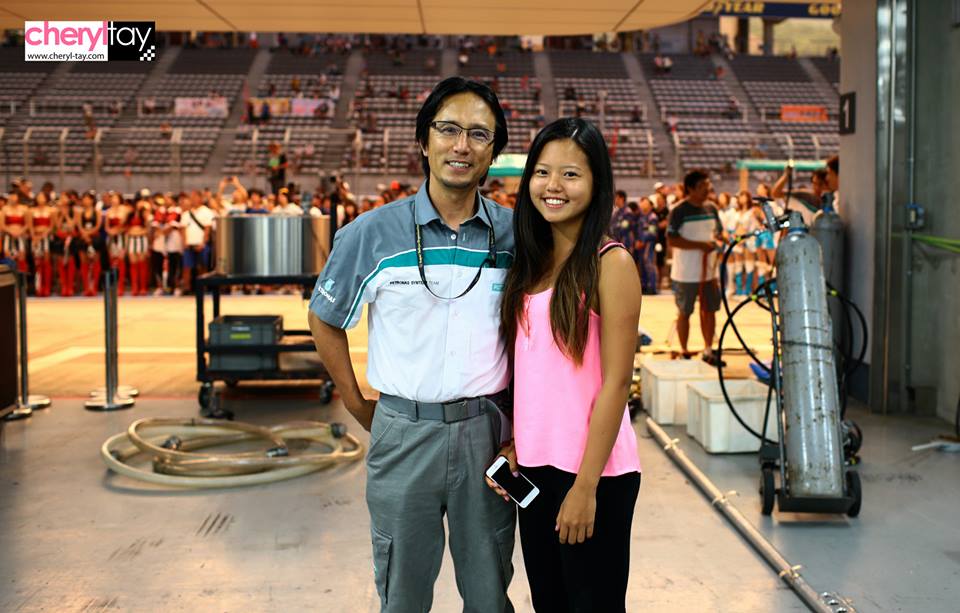 The next round, which is happening this weekend, is an interesting one as the team is split between Okayama and Sepang. Yes, Round 5 of the Super Taikyu Series clashes with the 12-hour Malaysia Merdeka Endurance Race (MMER) this year! Last year the MMER was counted as part of the Series and teams could opt to do that, hence the PETRONAS Syntium Team skipped Okayama. It will be interesting this year and hopefully the team can clinch victories in two countries simultaneously!