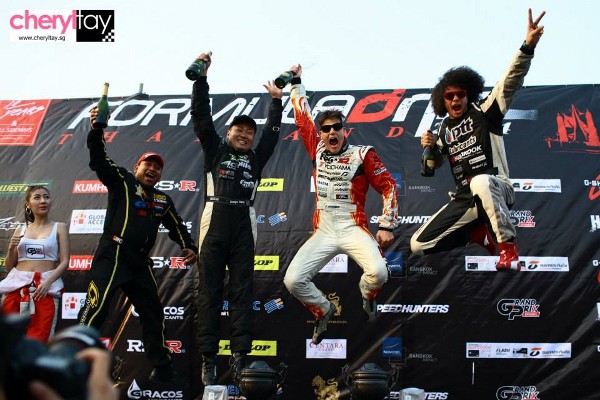 I almost didn’t make it for Formula Drift Thailand 2014. Scheduled to fly one day after the ‘Bangkok Shutdown’, I admit I was feeling a little scared of going to Bangkok and Marcus (Lim) did give me an option to stay behind in Singapore if my parents were not comfortable with me going over. But boy am I glad I chose to go! How can anyone miss out on Formula Drift if there is a chance to go for it right!

And so I went…

I usually fly up on Thursday morning in time for the press conference, but this time it was held on Tuesday so I went up earlier. The last Formula Drift held in Thailand was held in 2010 and it was good to be back. There’s a huge drifting community in Thailand and the enthusiasm really rubs off. 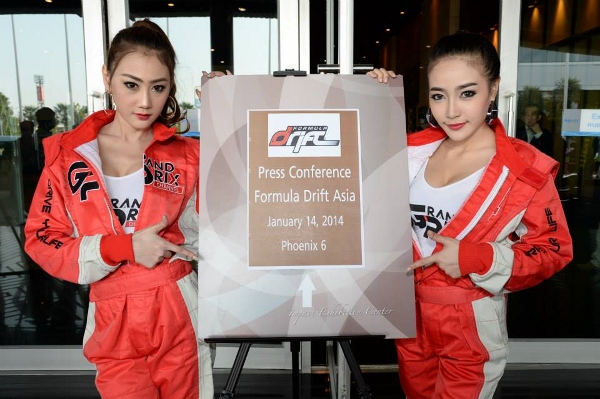 Unforeseen circumstances saw the cancellation of Formula Drift Indonesia initially scheduled for December. Instead, the third round for the 2013 Formula Drift Asia series was held in conjunction with the first round of the 2014 season in Thailand. It is the first time Formula Drift Asia is having a double-round weekend and so it was a special event! 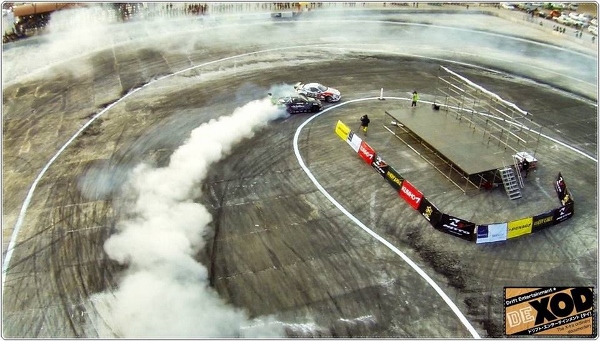 It was also special for me, and the rest of the Driftpac team, because it was the last time we were handling the operations for Formula Drift Asia. After six years and five countries, operations from 2014 onwards will be handled by the US side. You’ll still see us around but in a different role, no longer stressing out over the ground work. 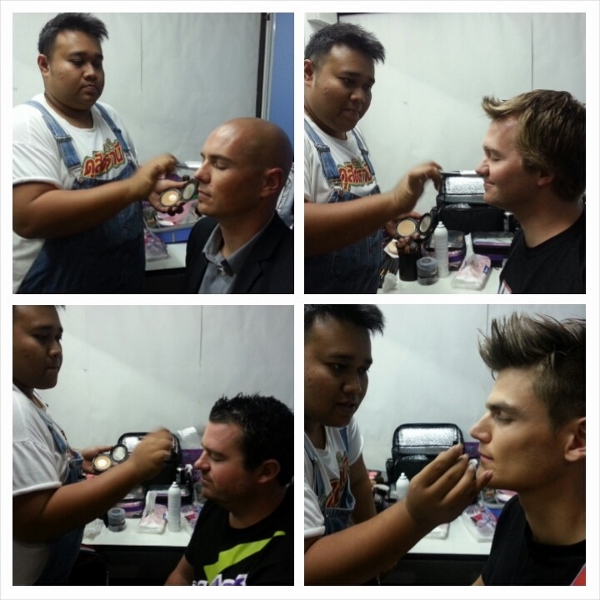 In my role as media manager for Driftpac, sometimes I get to witness awesome moments like the drivers getting make-up on. How often do you see Fredric Aasbo getting lip gloss on for example? These selected drivers, plus Formula Drift co-founder Ryan Sage, went ‘live’ on a motorsport programme called Racing Variety on cable TV. 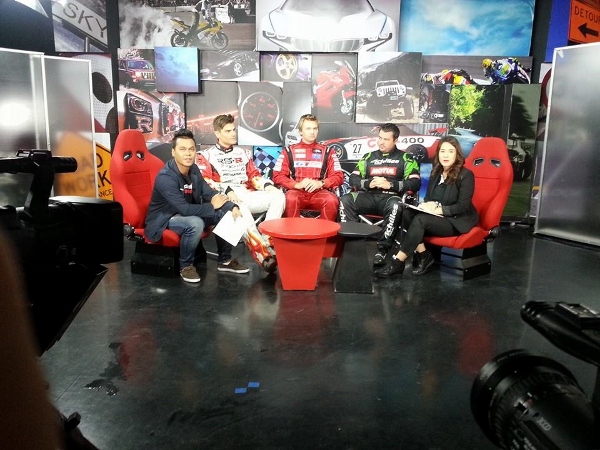 Friday is when things get official, with driver registration and the first driver briefing of the event. Of the 42 drivers who competed, half of them were Thai. It was so good to see many familiar faces again, as the Formula Drift Asia family reunited at Pathum Thani Speedway on 18 and 19 January. 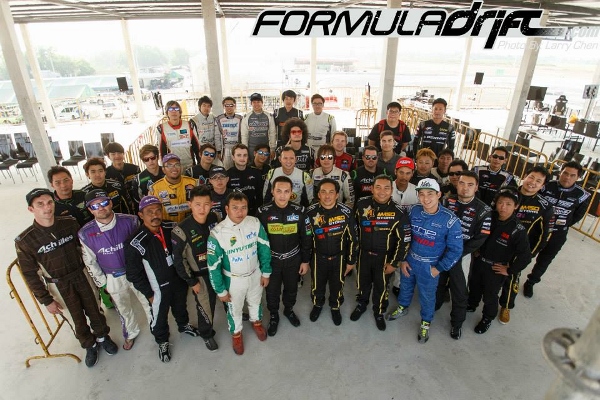 Official practice got on the way after the driver briefing and the place was filled with loud roars of various engines – music to any car enthusiast’s ears. 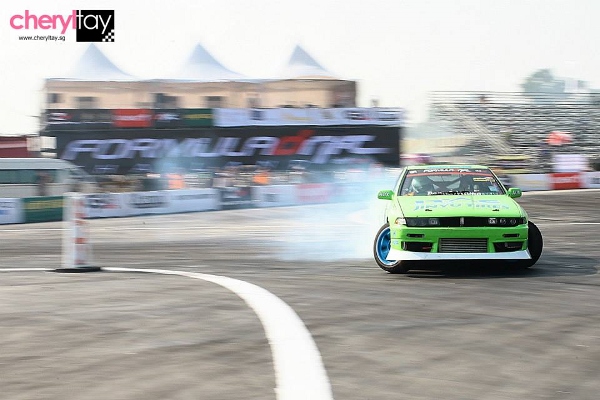 The sun started to set towards the end of practice, making a beautiful backdrop for photos! 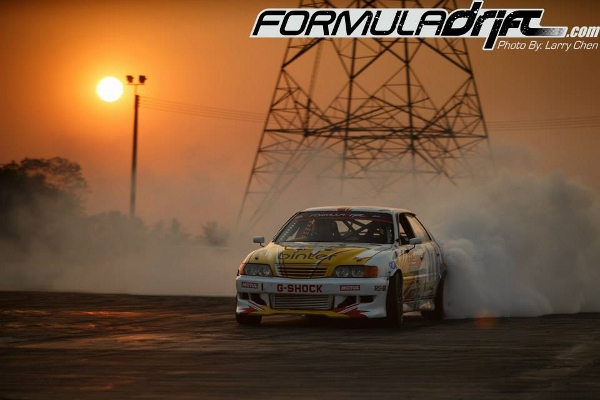 This round was held over two days – with qualifying on Saturday and the Top 32 tandem battles on Sunday. Previously, Formula Drift Australia and Malaysia were held in one day and straight to Top 16. 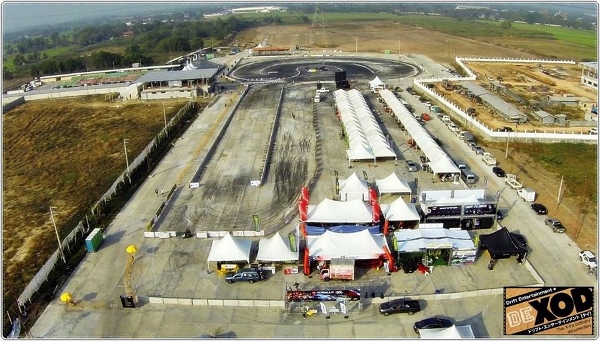 With the knockout qualifying format, the top-scoring 16 drivers of the first run were ranked as Top 16, hence not needing to go for the second run. Fredric Aasbo scored 82 points with his RS-R GT86 NASCAR V8, so did Davide Dorigo and M of the PTT Performa Drift Team. But they were ranked first, second and third qualifier respectively, according to their speeds. 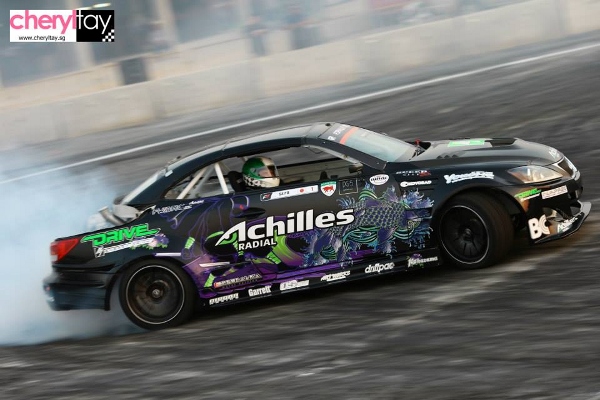 Reigning champ Daigo Saito managed a fourth place qualifying, just ahead of Malaysia’s Prince of Drift Tengku Djan in fifth. Some of the drivers like Tom Monkhouse (who was leading the series coming into this round) and Robbie Nishida screwed up their first run so they had to go for a second one. 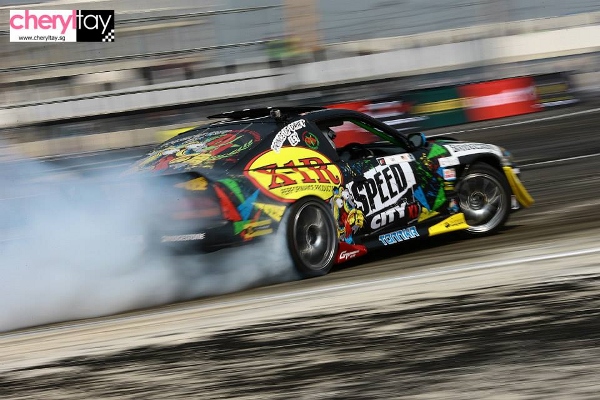 There were four Singaporeans in the competition – Jansen Tan, Geoveen Hi, Ng Sheng Nian and Benjamin Chiam. Doing the little Lion City proud was Chiam who qualified in sixth place after Djan with his Toyota Supra. Jansen (pictured below), one of the pioneer drifters of Singapore, had problems with his car and failed to make it to the Top 32. Ng, the newest to drifting of the four, just made it with his score of 54 for the 32nd position. 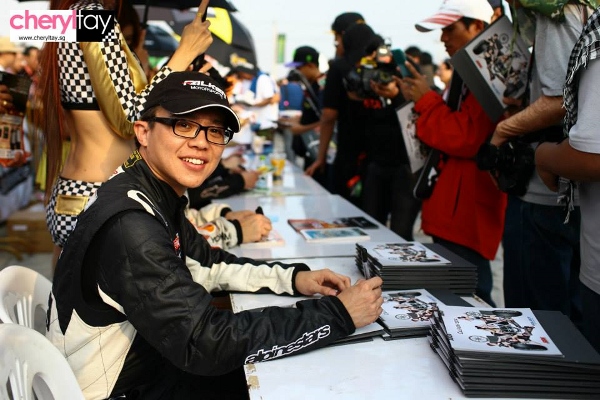 The atmosphere on Sunday was amazing, as the winner of the day would wrap up the 2013 season well and also set the pace for the rest of the year. Monkhouse was leading the 2013 championship by two points ahead of Saito and potentially had the chance to win the 2013 title, but ill fate struck him when his transmission broke down at the end of practice. His crew rushed to fix the car before his battle, but he ran out of time sadly. That lost him his championship hopes and he could only sit and watch the rest of the battles. Monkhouse did however, clinch Rookie of the Year and and Hardest Charging Driver of the Year for 2013 at the Annual Awards. 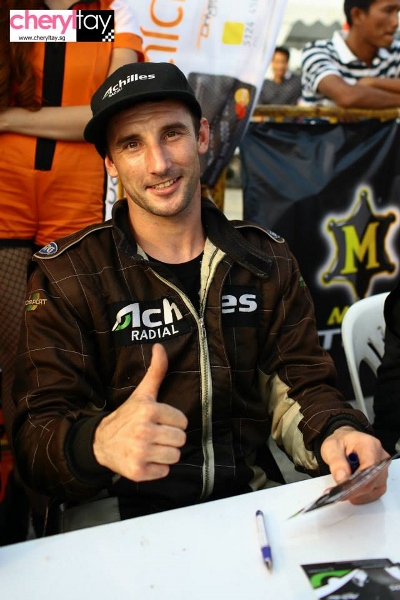 The battles were exciting as usual, with a string of upsets and surprises. 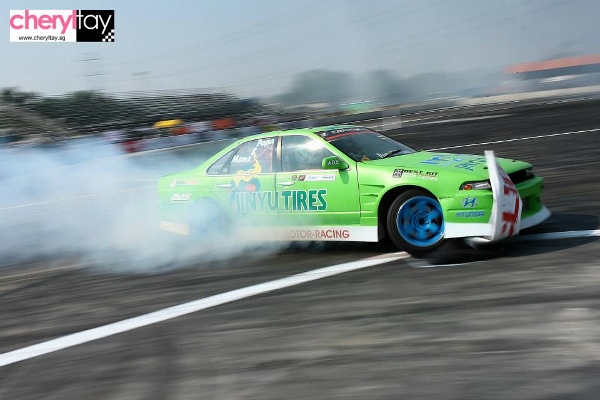 I’ve written about the results of the battles a couple of times already and I’m not going to bore you with the details. You can always have a look at the battle bracket here. 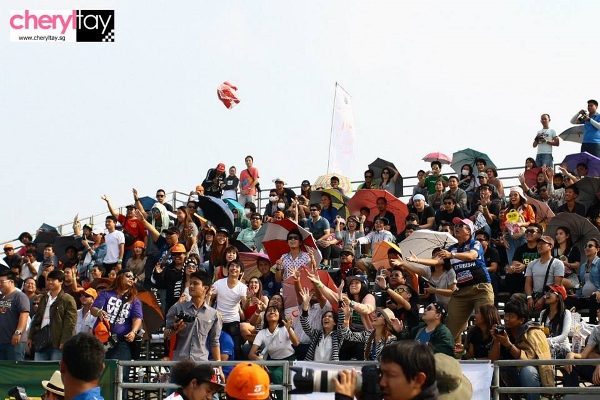 The Top 16 Driver Parade was a load of fun, as drivers threw toys, tshirts and even umbrellas (cautiously of course) to the fans. 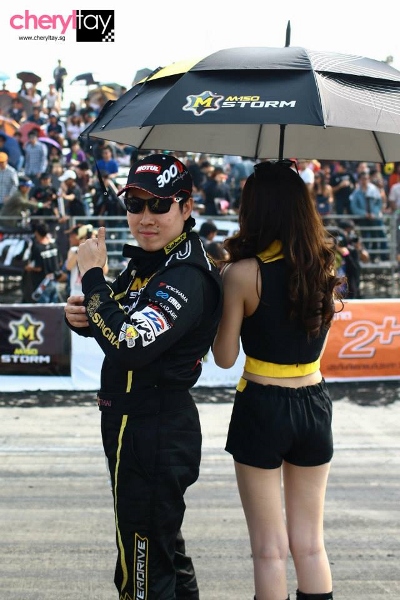 Ken Gushi and Djan had a pretty exciting battle, going One More Time, with Djan eventually taking the win. It is also his last drifting competition as he announced that he will be retiring from the scene. 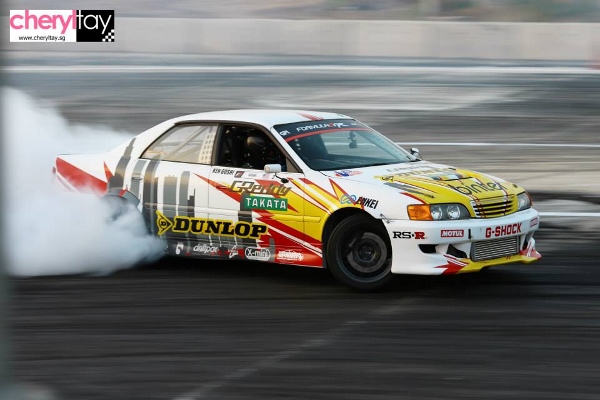 I also wanted to give a special shoutout to Josh Boettcher. He arrived at the track on Friday morning, only to find that his car (that he hasn’t seen since the Malaysia round) had some rusting parts in the engine, probably from going through the floods that weekend. He nearly withdrew from the competition but Gavin Wood managed to get the car up and running. Josh didn’t make it past the Top 16 but I thought it was really good considering he almost didn’t make it to the start line. He also came in overall third for 2013. 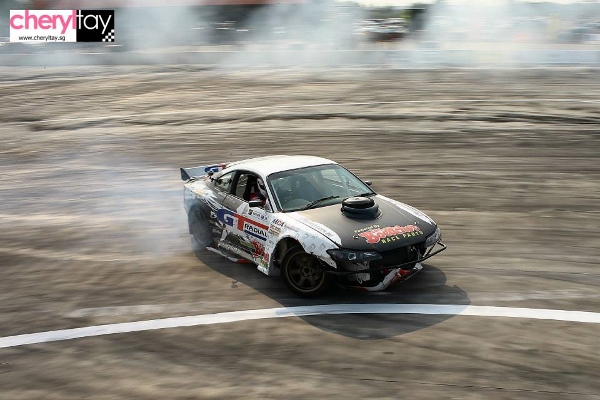 Aasbo was dominant throughout – qualifying first then winning the Team Drift event with Nishida, before fighting his way to the final. 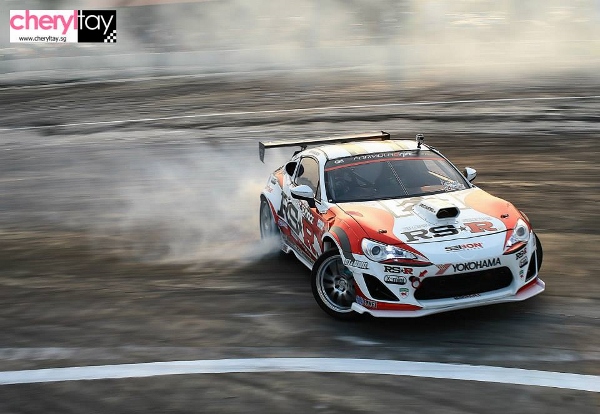 He was so determined to win, especially with this iconic custom build that gained a reputation for itself in the drifting world. 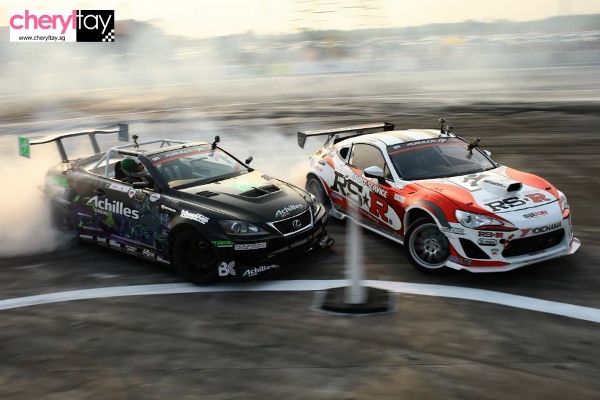 Meeting Saito in the semis, Aasbo took that battle from the Japanese ace who was feeling under the weather and struggled to keep focused on the task at hand. 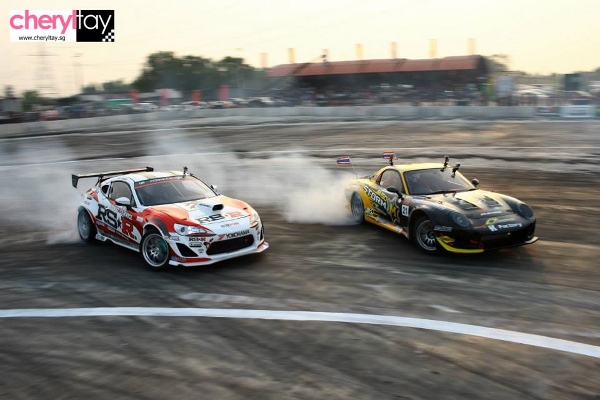 The final battle was between Aasbo and Nattawoot Krerpredab (Oat), who has not made it so far in a long, long time. This is Oat’s second Formula Drift podium and I’m really so happy for him! 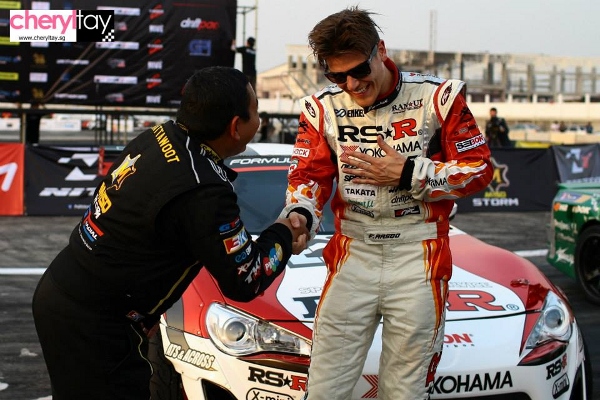 He’s the ever-smiling guy who will always help you out and after being translator for other Thai drivers who graced the podium, it was about time he took the podium himself. 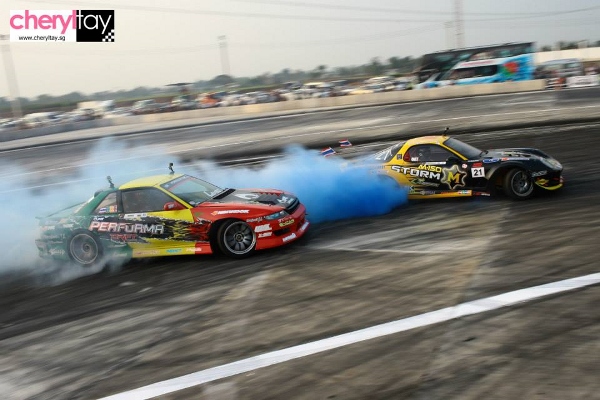 Dorigo (the one with the poofy hair) also did well to take third place, beating Saito in that process. 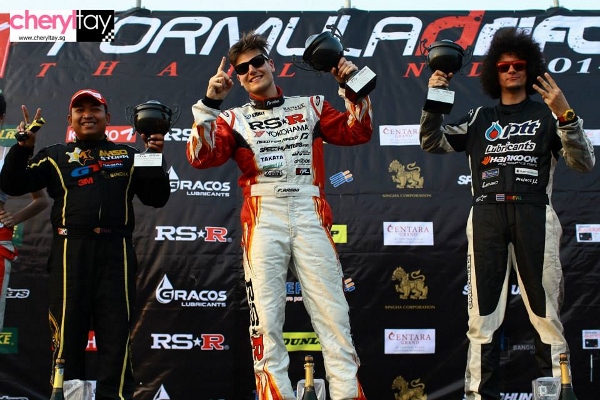 Saito wasn’t happy of course – he was denied the podium in Malaysia and yet again. He only wants to win all the time and even though he was sick, he said that was no excuse. His fourth place was enough to clinch the overall 2013 title, his third title by the way, but he still wasn’t happy about his performance that day. Well, getting harder and harder to win perhaps? Gone were the days when Saito dominated outright and not many came close. 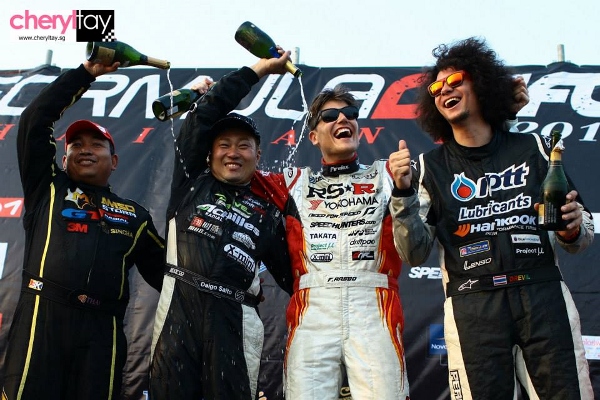 The RS-R team was in tears of joy, finally getting the win they have been chasing so hard for. The car made its debut in Australia, but encountered teething problems which later led to a DNF in Malaysia. 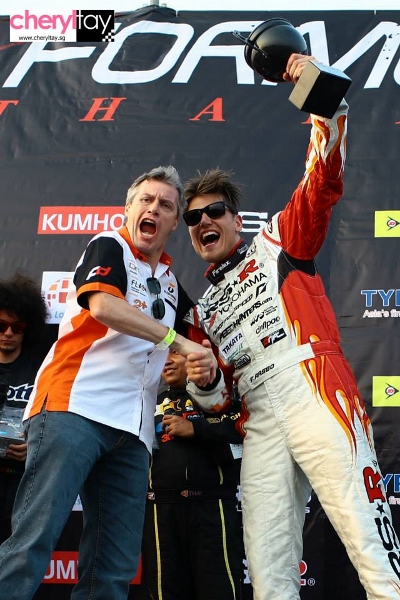 Off to a good start for 2014, Aasbo will be charging hard for the rest of the year I’m sure. Can’t wait for the next round in Japan! 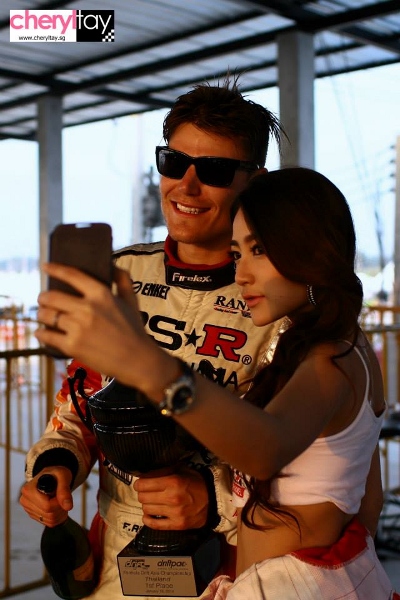 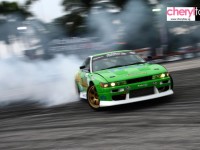