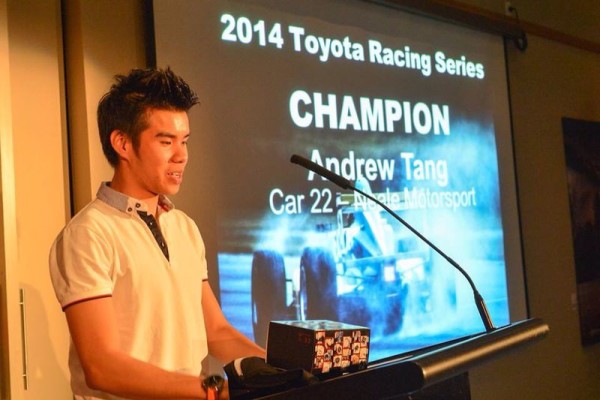 An online petition has been started by Denis Lian, local veteran racing driver, to help the young budding driver Andrew Tang get deferment from National Service (NS). The 19-year-old recently won the Toyota Racing Series in New Zealand (his second season) and has received offers from some teams in Europe, but is unable to make any firm plans or commitments because of his looming enlistment in May. He was to enter NS on 4 February, but managed to get a delay so he could battle for the title. A good thing he did not miss the final weekend of the consecutive six-week series and he certainly did not disappoint.

Read the full story I did on Andrew Tang’s TRS victory on Yahoo!

The petition is addressed to the government “to allow Andrew Tang to defer his National Service so that he can pursue his passion of one day representing Singapore in the F1 World Championship”. It is stated there that “Andrew Tang is the most talented racing driver to have ever emerged from our small island nation of Singapore. It would border on criminal if his talents are curtailed by the governments insistence of him having to serve his National Service duties in the traditional way. His successes and victories behind the wheel will provide far greater national pride, joy and accomplishment than him wielding a gun. Please support this shining star before he’s snuffed out.” So far, 200 signatures have been achieved in less than two days”.

In one of his comments on Facebook, Denis also said, “If I were the chap sitting in MINDEF, I would simply stipulate that Andrew would have to compete in a racing series which will help him progress to F1 ultimately. During the racing off season, he would need to come back to SG and perform his NS duties for the next 5 years, by doing motivational speaking to schools, SAFRA, even active military camps and other govt agencies. The things he will experience to reach the top of his game on the road to F1 will give him the strength of character and wisdom beyond his years that the vast majority can benefit from. That would be a far greater National Service contribution then him wielding around a gun“.

Andrew’s mum Anita, whom I also spoke to at the interview, said she really hopes the government can grant him deferment. At present, Andrew is probably the biggest Formula One hope that we have for Singapore. What other local racing drivers have done is to stop racing entirely or race on weekends at nearby countries. Will Andrew be successful in his request for deferment?