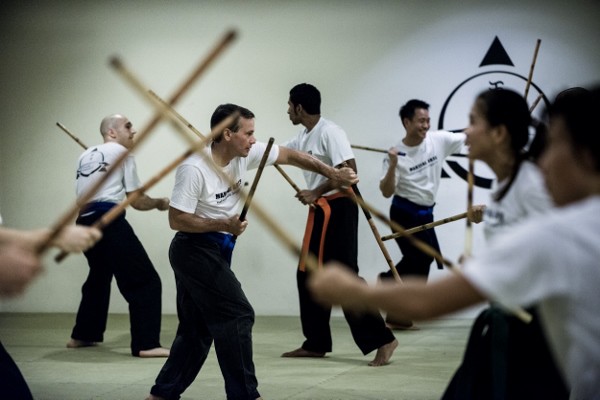 What are some martial arts that you have never heard of? Here we uncover five uncommon martial arts practised in Singapore:

When discussing martial arts, it is only natural that people will talk about more popular systems such as Taekwondo, Karate, Judo, Muay Thai and Kung Fu. However, what many do not know is that there are several lesser-known martial arts practiced right here on our tiny island.

From the face-to-face combat style of Kapap to stick fighting in Kali Majapahit, we scoured Singapore to find out more about these rare practices of martial arts and why their founders decided to bring these respective martial arts here.

Employed by the Israeli Defence Forces, the Israeli National Police and their special operations and anti-terrorist units, Kapap is the Hebrew acronym for face-to-face combat. 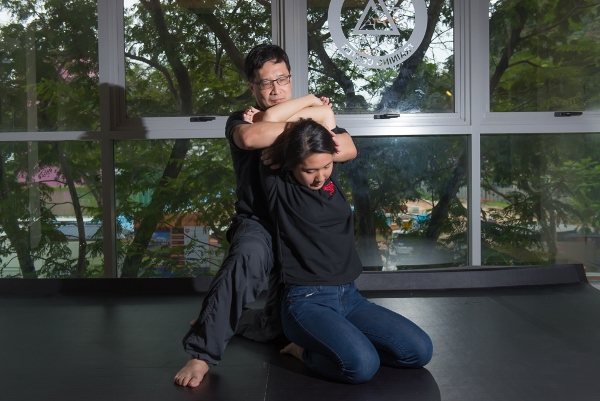 In Singapore, you can practise this unique martial art at KAPAP Singapore, which was founded by Master Teo Yew Chye. Although Teo had over four years of training with some of the world’s best martial arts experts such as Major Avi Nardia, it was a personal tragedy that led him to start this academy.

“My brother got involved a street fight over silly things and he ended up in a coma for seven years since 2000. I was depressed when he later passed on and I wanted to do something in memory of him,” Teo said.

To Teo, KAPAP is unique because they do not punch or kick like in other martial arts, but instead, train with weapons.

“We teach people to fight with real weapons such as knives, machetes, tomahawks and even sticks. The reason is because it is not realistic to fight against three to four people armed with knives and you can’t tell the guy to fight fair because there is no fairness in the streets,” Teo elaborated.

Beyond just teaching self-defence, Teo adds in other components in his classes to ensure his students will be able to survive a street fight or avoid a confrontation altogether.

“One is the bodyguard principle, which is about situational awareness and how to avoid danger. The other thing we teach is the psychology of predator behavior – how to know when people are out to hurt you and the body language that goes with it. Then we add in the fighting,” Teo said.

This modest gym along Keong Saik Road can accommodate up to 20 students at a time. KAPAP classes are conducted four times a week. 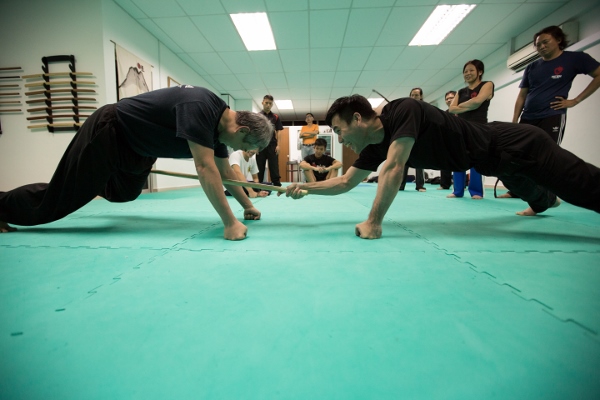 Systema is a unique principle-based Russian martial art system that focuses on developing a calm state of mind, freedom of movement and strong spirit.

“The difference between Systema and technique-based martial arts is that we teach more movements. We also go back to the basics of martial arts such as breathing and form,” Felix said.

After attending the 2010 Summit of Masters in Toronto – which was conducted by Systema Masters Konstatin Komarov, Vladimir Vasiliev and Mikhail Ryabko – Felix was absolutely blown away and decided to bring Systema to Singapore.

In Systema, a large part of training focuses on mental states and psychological work while part of it centres on strength and conditioning. The rest of it involves drills and practical applications. Being a modern self-defence art form, Systema includes wrestling, groundwork, hand-to-hand combat, take downs, giving and receiving strikes, knife work as well as defence against multiple opponents simultaneously.

Innovative training methods move away from memorising fixed movements or patterns. Instead, students are taught to readily adapt to different scenarios through situational drills. One such method is through “Slow Work” where students do not rush through movements but literally slowly work through each exercise to strengthen a different set of muscles altogether.

“The Russians think differently; they believe the bigger muscle groups are easy to work. You can go to the gym and lift weights. However it’s the least used muscles that are supported inside of it that you can’t work out in the gym. Slow work, combined with breathing, allows you to strengthen the body from the inside,” Felix elaborated.

Systema classes are conducted twice a week at its gym on Selegie Road, while additional classes are taught at Bishan and Toa Payoh Community Centres.

If someone were to ask you to name a Korean martial art, the first answer that would probably come to mind would be Taekwondo. 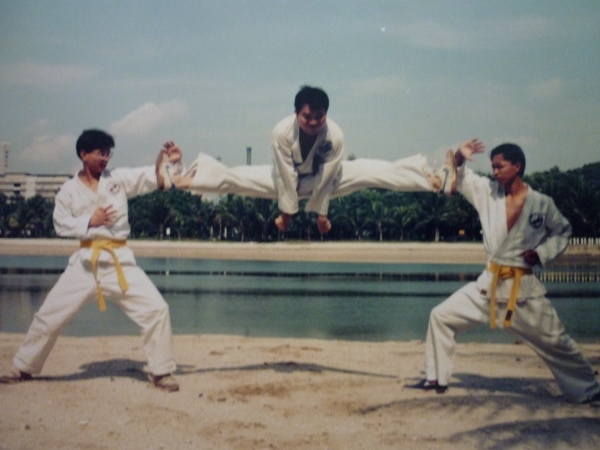 Taekwondo Grandmaster He-Young Kimm felt largely inadequate to be prolific in just a single martial art, thus he set out to study and practise the various traditional Korean martial art forms to widen his knowledge and skill set.

After training and studying under many prolific Grandmasters such as Grandmaster Ji Han Jae, the founder of Hapkido; and Grandmaster Suh In Hyuk, founder of Kuk Sul, he was told he should start his own martial art since he had such an extensive knowledge of Korean martial arts. He decided to do so and called it Hanmudo, which means The Korean Martial Way.

“For unarmed combat, you have hand and leg techniques. When the opponent comes closer, you have pressure point, joint locking and throwing, and bone breaking techniques. Then as you bring the person to the ground, you have ground techniques,” Dr. Dennis Chua, founder of the Hanmudo Association of Singapore, explained.

“You also have weapon techniques. You have to assess the situation and should you find that the odds are against you, you can adapt your knowledge of using Korean weapons to using everyday things around you.

“For Chi training, we focus on our breathing and redirection of our energy to the different parts of our body for combat.

“Finally, there is philosophy. We are trained with certain dangerous techniques but we have the responsibility to know when and when not to use it. Therefore there must be a philosophy to control these techniques, which comes from the actual practice of it.”

A lack of a constant syllabus in other Korean martial art forms led Dr. Chua to search for one that provided a more definitive and comprehensive structure, which was when he came across Hanmudo and decided to bring it in to Singapore.

“I wanted to have a full system. I found out that the Korean Kido Association recognises the Hanmudo syllabus. In order to be registered, you must have a definite syllabus. Also, Grandmaster He-Young Kimm travels around the world to personally test the students, and also assesses their character,” Dr. Chua added.

Dr. Chua conducts classes thrice a week, with each 15 to 20 students per class to ensure that dangerous techniques such as pressure points, leveraging and joint locks are properly taught.

Kali Majapahit was created based on founder Fred Evrard’s extensive exposure to various martial arts, where he combined the most effective aspects of each martial art as the base of their system. 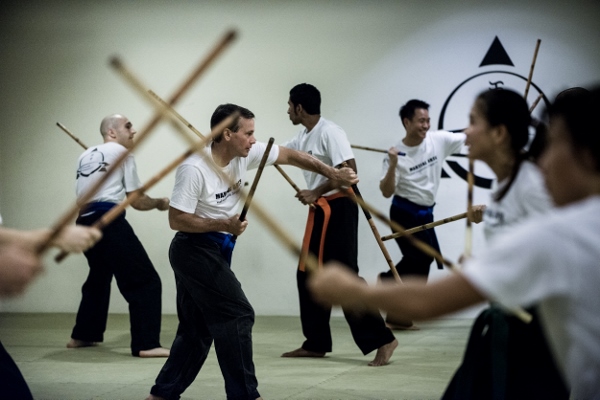 “The core of our martial art is based on Filipino martial art Kali. The reason why we called it Majapahit is because Majapahit used to be an empire in Southeast Asia so that is our influence. We have influences from Silat and some Chinese martial arts like Wing Chun,” Ben Boeglin, senior instructor of Kali Majapahit explained.

Due to the large number of influences other martial arts have had on Kali Majapahit, the curriculum of this art is pretty extensive. There are aspects of sword and knife training, Filipino boxing and even Bruce Lee’s Jeet Kune Do. However, Boeglin explained that despite the association with various martial arts forms, people still link Kali Majapahit with the use of sticks, as stick fighting is unique to Filipino martial arts.

The philosophy behind Kali Majapahit is that martial arts should not just be about physical training, but also about understanding your body better. Kali Majapahit focuses on three main pillars: self-defence, health and personal development.

“The health and personal development aspect is an important reason why we teach it. We hope our students learn that beyond being able to defend themselves, they should also know more about themselves and how they are able to take care of their bodies,” Boeglin said.

Kali Majapahit classes accommodate up to 20 students at a time, with over 20 classes per week for kids all the way to advanced practitioners.

Simply put, “Ninjitsu is the art of the ninja,” Shidoshi Nachum Kaplan expressed. Even though Ninjitsu is associated with ninjas, one should erase the image in your head of individuals jumping from wall to wall and dashing around in black getups from top to toe. 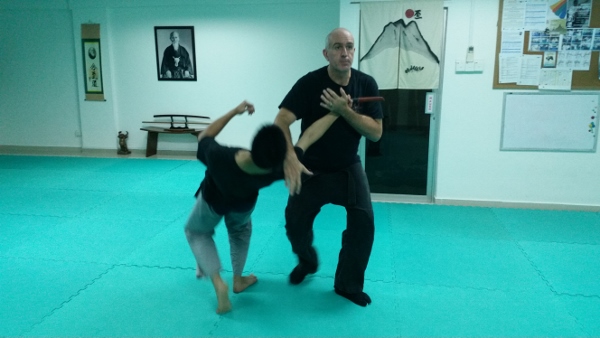 Founded in Japan, Ninjitsu was mainly used for spying with the art rising to prominence during the Warring States period.

“As it is the art of the ninja, there is a lot of hidden stuff in the movement that you cannot see unless you are trained to so. We rely on natural movement, balance, distance, timing and angling for power so it’s deceptive and you need not be big or strong,” Kaplan revealed.

Most martial arts have a signature move, but Kaplan believes that in Ninjitsu, their signature move involves everything as being predictable is a weakness that can get one killed. This is why in Ninjitsu one is trained to fight standing up, sitting down, on the ground and even in water. One is also trained to use various weapons to his advantage.

“However we do these things in our own unique way. We don’t just strike but we have special ways of targeting nerves and bones. We don’t just throw but we throw in special ways that make it very hard for our opponent to land safely. It will never be what you expect,” Kaplan added.

On a side note, for anyone who’s interested in picking up this rare martial art with a hope of becoming a Ninjitsu instructor in the future, you might want to know that there is a peculiar test involved.

“It involves kneeling down with your eyes closed while a master stands behind you with a sword and attempts to cut you with killer intent. To pass the test, you have to be able to roll out of the way upon sensing when he is about to strike,” Kaplan disclosed.

Currently, Kaplan conducts lessons just once a week to an average class of 10 to 14 students. He will soon be adding four new beginner classes a week.

*This was first published in FHM Singapore and reproduced with permission.