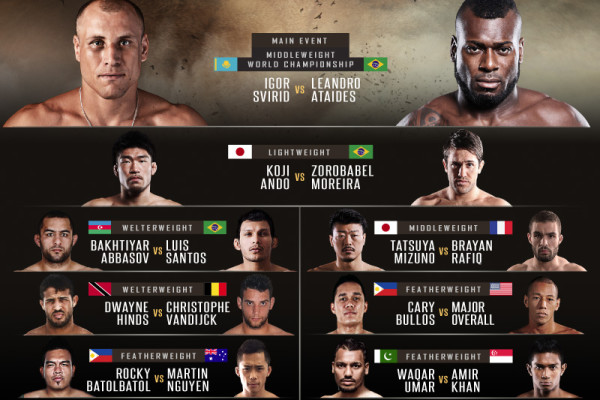 Asia’s largest mixed martial arts promotion ONE Fighting Championship (ONE FC) returns to Singapore for the seventh time this Friday. Headlining the fight card is the inaugural ONE FC Middleweight World Championship title bout, which is set for an explosive battle between Kazakhstan’s Igor Svirid and undefeated Brazilian Leandro Ataides.

Zorobabel Moreira suffered a shocking defeat at his last fight in 2012 and lost the ONE FC Lightweight World Championship title as a result. After a two-year hiatus, he is back this Friday renewed and refreshed, ready to prove he still has it.

Hometown heroes Amir Khan and Kirstie Gannaway will be flying the Singapore flag high. Amir launched an impressive debut at ONE FC: RISE OF THE KINGDOM when he knocked out Malaysian Jian Kai Chee with a series of striking blows to the head and stomach. This will be Kirstie’s first time in the ONE FC cage, but don’t underestimate the pretty face – she has some solid boxing power in her hands.

Eddie Ng, ONE FC top lightweight contender and Berocca ambassador, shares his insights on these four matches that he is looking forward to, as he supports his Evolve Fight Team-mates at the Singapore Indoor Stadium. Who are you rooting for?