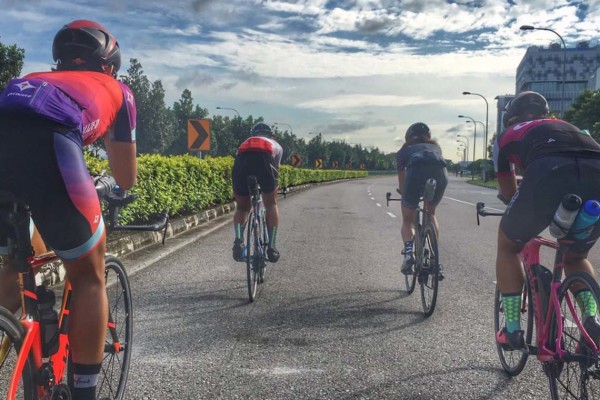 I’ve been cycling for over a year now (since I bought my Tough Princess roadie last April) and I’ve encountered some really amusing incidents, including the one where I ran over a chicken in Phuket. I don’t think the rooster died (phew) and my friends had a good laugh over it. Who the heck runs over a chicken? LOL!

So I went to give it a think and here are more anecdotes from my highly exciting life on two wheels:

1) Why did the chicken cross the road?

I was coming downhill (speed was quite fast) on some back roads in Phuket when I saw this white rooster had already crossed the road to the other side. Upon hearing me however, the rooster decided to RUN back to where it came from. I saw it heading towards my path and I started to panic (“Oh no, oh no, don’t come towards me!!”), but I was rounding a bend and I didn’t want to make any sudden movements. I pressed on the brakes quickly but alas, it was too late and I slammed right into the rooster. It SQUAWKED so loudly on impact and it bruised my left shin in the process, before I went over it like a hump.

I felt so, so, so guilty and was going to check on it on my next loop (we were doing loops), but it wasn’t there anymore! Omg where did it go?! Ok the good news is, it probably didn’t die. The bad news is, it might be badly injured. I was going at about 40kph so the impact must have been quite unforgiving. 🙁 Anyone likes a woman who catches her own dinner? J/k! 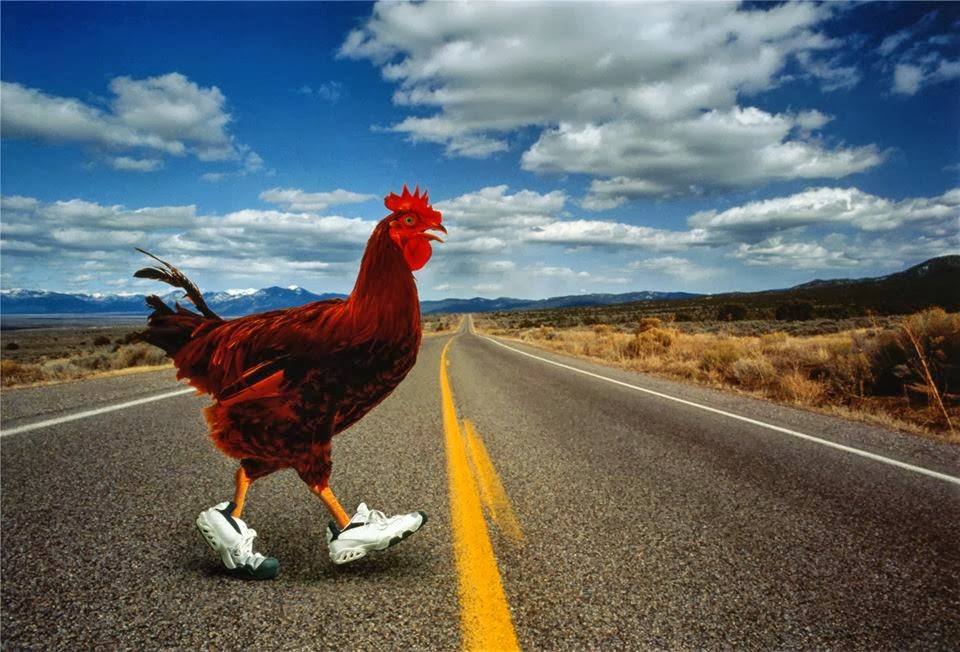 2) Why did the tortoise cross the road too?

It was 4am in the morning but I swear I saw this tortoise crossing the road at Pandan Reservoir. The roads are dimly lit by the street lamps at that hour and I saw this black blob ahead of me that seemed to be moving! It freaked me out a little because I couldn’t see what it was, so I slowed down and approached it cautiously… before laughing out loud because it was a TORTOISE! LOL!! 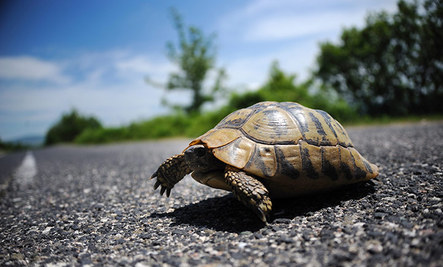 So, I was cycling with my group of girlfriends – 4 of us altogether – and I was the last one at the back as we were approaching a stoplight. Ling was right in front, with Jess and Ryn side by side, behind Ling. Jess and Ryn were chatting, and Jess didn’t notice that Ling had stopped so she rode into her. It was at low speed so no one got injured but Jess’ aerobars broke.

The joke of the day though, was that I fell completely on my own even though I was like 50 metres away from them. What happened was – I panicked when I saw Jess about to hit Ling and I was so shocked that I fell off my own bike. It was hilarious!! I had already unclipped my left pedal but I fell to the right!!! LOLOLOL!! SHIT!!!

Ling and Ryn were walking over to help Jess up when they saw me fall, and they found it so funny. “Why you fall sia?!” was their first question to me. Poor me was trying to hide the humiliation but hurriedly getting up myself. HAHAHAHAHAHA!! EPIC!

It’s not uncommon to see rats scuttle across the pedestrian paths. Usually I manage to successfully avoid them, but there was once when it crossed my path directly and I accidentally went over its tail. I was so worried I would ride over it and flatten it, but I only caught its tail and it squeaked in pain quite loudly. I’m so sorry!!!

I am not a fan of wild monkeys, because they can get quite aggressive by grabbing your belongings and possibly hurting you in the process, so I don’t want to meet them. I was cycling through Rifle Range road one morning and I saw this entire family of monkeys sprawled across the road. There were little ones, adult ones… and I was really afraid that I might accidentally ride over one of their tails (like the rat) or have one of them jump on me. Thankfully, they moved away as they heard me coming… but stared at me anyhow as I rode past acting like I didn’t give a shit about them. 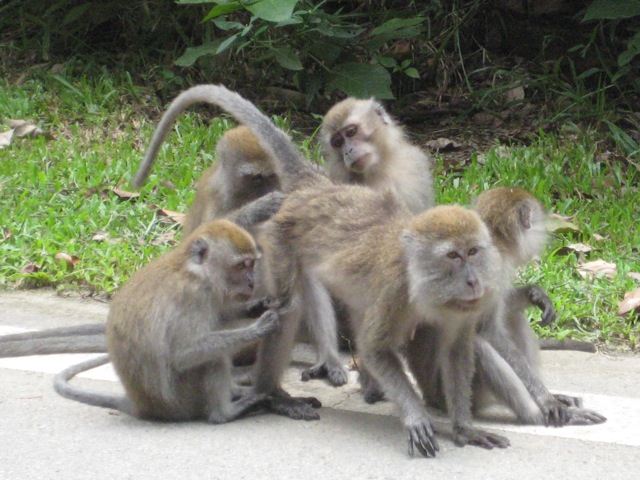 Around the Lim Chu Kang area, there might be stray dogs loitering sometimes. My friends have been chased by dogs there before and recorded it on video. For me, I’ve fortunately not encountered any dogs in Singapore before. But it was in Phuket, the same area as the chicken I ran over, where I got chased by dogs. They saw me coming from afar and sprinted over to bark at me. I screamed and shouted at them to go away, while trying my best to pedal as fast as I can UP THE FREAKING SLOPE. I was just scared that they would bite at my heels!

In the wee hours of the morning, the only people on the road are the odd uncle cycling with his basket on the back of his bicycle, heavy vehicles or taxis. At one particular stoplight near Marina Bay Sands, I rolled up next to a cab and he wound down his window suddenly. He complimented my pretty bike (GRIN) and then gave me a thumbs up for waking up so early to exercise. Aawww, definitely made me feel better!

I like how sometimes I wake up to go out and cycle at a time when people are just getting out of the clubs. I’ve rode past many clubbers sitting by the pavement, looking like they had a bit too much to drink. On one occasion, there was this group who suddenly ran across the road. It looked like this guy was drunk and he crossed the road without looking to climb the green barrier in the middle of the road. His friends therefore ran after him to try and get him back. Amusing!

YES a wild boar dashed across my path before at Neo Tiew! I remember I was scrunching up my nose at the putrid stench (normal for that farming area) when this black hairy snorting thing rushed across. WOW. It happened so quickly that I couldn’t get my GoPro out in time to take a picture, but I found it really funny! OINK OINK!! 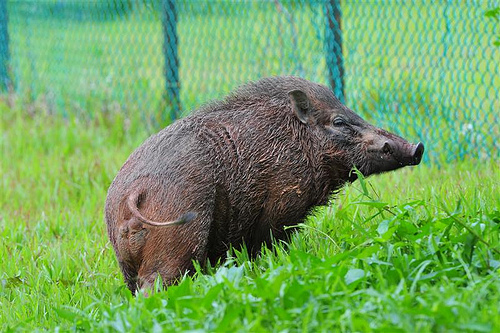 There was once when I had a HOLE IN MY RUNNING TIGHTS and I didn’t know, until this kind lady ran up to me urgently to tell me I better get home asap. The thing is, I didn’t feel that it was airy below! Of course, my friends all had a good laugh at me about this. Then, I was cycling with my group of girlfriends again and Weiling told me that the zip of my cycling bib was undone! OMGWTF I didn’t even know my cycling bib had a zip can! It only exposed the flesh above my butt crack, PHEW.

It was just another ordinary Sunday long ride at Seletar, when I suddenly felt something sharp pinch at my left bicep. Shocking me a little, I stopped immediately by the roadside to check what happened and I found a bee in the sleeve of my cycling jersey. WTF. I pulled it out of the sleeve and threw it away of course. Thankfully I was fine – that’s why being thick-skinned is good sometimes, LOL!

So, I’m sure everyone has their own 2-wheel stories to tell. I would love to hear them!! For now, I hope my stories made you smile or even laugh some. Ride safe ok!!