The Race Of Champions and Frankfurt’s Commerzbank Arena will bring motor sport and football together under the same roof at two all-new events to coincide with Euro 2016 and the 2018 FIFA World Cup.The centrepiece of the month-long festivities will be a race featuring past and present drivers from the world’s big football nations such as Germany, France, England, Italy, Spain and Brazil. The format will be based on the annual end-of-year ROC Nations Cup with head-to-head racing in identical cars – but seeing what happens when you take some of football’s biggest rivalries and transfer them from the pitch to ROC’s unique parallel racetrack.

The Frankfurt venue will also host a series of motor sport-related events lasting for the duration of the football tournaments including a Fan Festival with entertainment, music and exhibition stands plus karting and drive days. The Commerzbank Arena will be ‘the place to go’ to watch the big matches on a 400sqm mega screen inside the stadium, which is already the best-known public viewing arena in Germany.

The Race Of Champions is an annual end-of-season competition that brings together the world’s greatest drivers from motor sport’s main disciplines – including Formula 1, World Rally, Le Mans, MotoGP, Nascar, IndyCar, Touring Cars and the X-Games – and sets them free to battle head-to-head in identical machinery.The Host for the 2014 event will be nominated in the near future and details about the venue will be announced in the coming weeks. 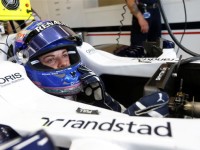 Susie Wolff is first female to compete in Race of Champions 2013
November 4, 2013