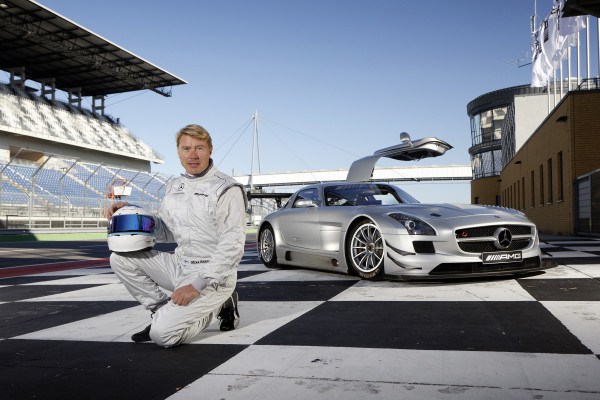 Two-time Formula 1 World Champion Mika Hakkinen will join Erebus Motorsport for the GT Asia Series at the Zhuhai International Circuit in China on October 11-13. This event also marks the launch of the AMG Customer Sports programme into the Chinese market. The winner of 20 Formula 1 Grands Prix will race the Bathurst 12 Hour winning SLS AMG GT3, which has been shipped to China with its sister car for a two-race campaign.

AMG China has appointed 17-year-old Hong Kong driver Matthew Solomon to share the SLS with Hakkinen in an apprentice role.

This is a first in the Chinese market for the AMG Customer Sports brand and will provide a blueprint for future motorsport endeavours in the market.

Erebus Motorsport’s series of firsts include having the first Gullwing delivered outside Europe, the first team one-two finish for AMG Customer Sports and added victory in the Bathurst 12 Hour to the 2013 Endurance Classics Grand Slam wins by the SLS AMG GT3 (Bathurst, the Dubai 24 Hour, the Nurburgring 24 Hour and the Spa 24 Hour – each with Bernd Schneider behind the wheel).

The second Erebus Motorsport SLS AMG GT3 will be driven by experienced AMG Customer Sports pilot Lance David Arnold. The 27-year-old partnered Hakkinen in a Gullwing on his previous visit to Zhuhai in 2011.

Erebus Motorsport will be aiming to add to the 100-plus victories by the AMG Customer Sports programme since its inception in 2011.

The two-event programme will see Erebus Motorsport enter the support race to the 60th Macau Grand Prix in November.