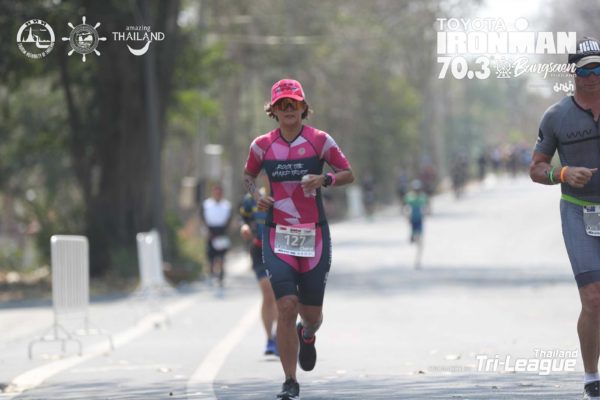 First race of the 2020 season couldn’t come fast enough – how are we already two months into the year?! Anyway, the Ironman 70.3 Bangsaen race in Thailand went on as planned despite the virus situation and I guess you could say I was lucky because it meant my training didn’t go to waste. (Although why I would call going through a sufferfest of such scale ‘lucky’ is beyond me.)

Our group was initially 7 adults and 1 toddler (yes my favourite baby Oliver), but it changed to just 4 of us (Anthony, Ernest, Marcus and myself) due to COVID-19. This time we flew in on Friday morning instead, since we were now familiar with how to get there. We rented a car and drove ourselves to Bangsaen (about an hour’s drive), checking in at The Tide Resort which is right next to Heritage Hotel (the official race hotel).

We went for a late lunch and then headed over to the race expo to collect our race packs and browse the booths. There isn’t much to do in Bangsaen and eating places are quite limited as well, so most of the time I was just chilling in my room. It was warm and humid as I remembered, and I was mentally preparing myself for a hot race – just like it was last year.

On Saturday morning, we woke up to strong winds and I was like whoa, this is new. It wasn’t windy in Bangsaen at all last year, or the days before (Ernest came up on Tuesday). We went out for a short test ride and it was scary AF. The winds were crosswinds and I was screaming a lot because I was scared of getting blown off. It was really frightening! They even delayed the bike check-in because everything inside the transition area were flying all over – the carpets, the barricades etc. The sea conditions were also choppy further out, which we tried during our test swim. Why did we sign up for this again? LOL!

I went to bed at about 9.30pm with my alarm set for 3.45am. Coming into this race, I’ve been pretty chill and when the alarm went off, I snoozed it for another 20 minutes because I was feeling lazy HAHA. I wasn’t feeling nervous and I think it’s good because being nervous makes me feel like I have ants in my pants and I don’t like it heh.

I left the hotel at 5am to walk over to transition to set up and then walked back to my room to drop off my stuff before heading to the swim start. The sea was cold and the wind was starting to build up. NOOOOOOO, why wind why! I went into the sea with the intention to warm up but ended up shivering because of the winds tsk.

I found Anthony in the same start pen as me and soon it was SHOWTIME!

I recalled the water was murky and a weird yellow last year, but this time the water was quite clear and not disgusting. Can’t say the same about the conditions though! From my memory, it was worse last year but still quite choppy and I drank so much water omg. I am terrible at such conditions and I also had people swimming into me (or maybe I swam into them) so I stopped several times to tread water and let the clusterf*ck clear. The last 400m seemed to take forever (my watch buzzes at every 500m) and the shore seemed so far away. I was just happy to get out of the water lol.

The bike route is not a technical route. It’s similar to Bintan’s 70.3 route perhaps, with some hills here and there, and quite a few bridges to cross. BUT the winds were really FKING scary. I didn’t dare to go into aero, didn’t dare to lift my hands off the base bar to drink any hydration, because I was worried that a gust of wind might knock me off. I really had to engage my core and fight the wobbling each time the wind hits me from the side. I was also riding at an angle, kinda like leaning into the wind direction, to counter its force.

I was legit fearing for my life and at some points I thought I was just gonna get swept up and slammed into something by the wind. I was looking around wondering what would be the least painful thing to get slammed into LOL. I did feel my wheels slide under me a little and I screamed a few times, much to the amusement of some bigger ang mohs who rode past in aero position seemingly unaffected by the winds. What is this!

The first 25km was spent fighting for my life and also fighting against the winds. I was like, eh I’m pushing here and only going at 21km/h what the shit! Once we left the highway and entered the reservoir area, the winds died down some and we even caught some tailwind so I made up some time here.

After the U-turn at the 45km mark, I thought we would get tailwind all the way but no there were still long blocks of headwind and I was getting quite tired and frustrated. Thankfully the last 10km was all tailwind so it allowed me to calm down a little.

All of this meant a slower bike time but I was just happy to get back safely to start the run. I mean, I saw a guy get caught by a gust of wind and he flipped into the bushes omg.

The run involved 3 loops of 7km with slopes, as it did last year. They removed one steep slope from last year though, and we ran in the reverse direction, but it wasn’t flat. The route was still up down up down up down.

What I really liked were the aid stations – there were so many! I cannot recall the exact number of aid stations, but the next aid station was always near enough. Most importantly, the water and sponges were chilled.

The run segment of a triathlon has always been the most painful part for me and the part I dread a lot. (Although seeing familiar faces on the run does help!) So, I thought I’d never say this but for the first time ever, I actually enjoyed the run. Yes it was hot and humid but because of the wind, it wasn’t that bad. I know right, for once the wind is in our favour.

I felt good on the run and was happy to hit a PB of 1:57:23, with a negative split. This is the first time I’ve gone under 2 hours for a half marathon wheeeeee! I am SO SO happy!! FINALLY

Total time was 5:38:30, an 8-minute improvement from last year but the field was more competitive this time. I placed 4th last year in my age group with a slower time, but only managed 10th this year with a faster time lol. My run was 12 minutes faster than last year’s though, so I’ll take that as a win for today.

Thank you everyone for the support and to all who did the race, HEY WE SURVIVED!

Oh and guess what? On Monday there were NO winds. #trolling