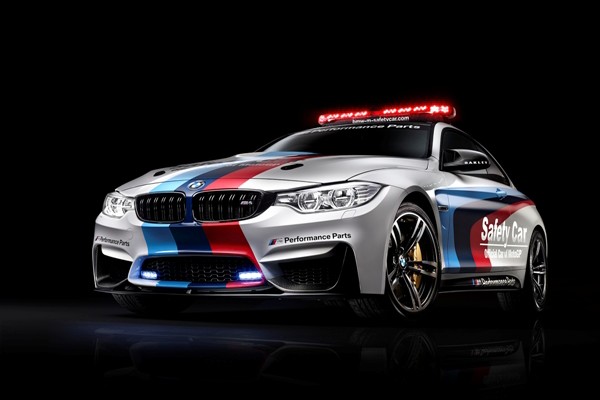 The MotoGP™ World Championship is motorcycle racing at its best and will once again enthrall millions of fans around the world in 2014. BMW M is proud to be part of this success story for the 16th season running. Since 1999, we have been the “Official Car of MotoGP”, helping keep the racetracks of the Motor Cycling World Championship safe all over the world. There are 18 races on the calendar this year, with the season getting underway on the 23rd of March in Qatar and finishing on the 9th of November in Valencia. MotoGP organiser Dorna Sports knows that BMW M GmbH will be a reliable partner to have at its side once again throughout the season. With the slogan “M. The most powerful letter in the world”, we are using the wealth of our technical knowledge to keep the world’s best motorcycle riders safe.

2014 will be the first year in which we use the BMW M4 Coupé with M performance accessories as the Safety Car. Four generations of the BMW M3 have combined motorsport genes and unlimited suitability for daily use into one highly emotional overall concept. The BMW M3 Limousine and BMW M4 Coupe are a natural progression of these fundamental ideas. The new six-cylinder turbo engine combines the benefits of the high-speed normal-aspiration power unit with the strengths of turbo technology. A consistent lightweight construction approach has reduced the weight by about 80 kilograms compared with the previous model. The BMW M3 and BMW M4 are bringing motor racing technology to the street. The tyres are put to the test over thousands of laps around Nurburgring’s legendary Nordschleife. We are certain that both models will set new standards with regard to the overall concept, precision and agility.