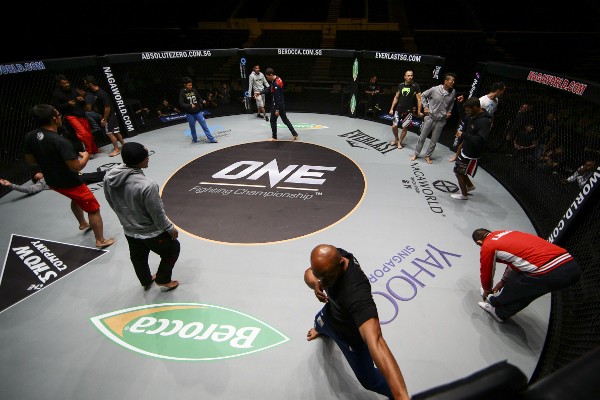 All you see at ONE Championship (ONE FC), Asia’s largest mixed martial arts (MMA) organisation, is a rousing event where some of the most highly-trained athletes in the world give their all in the quest to become champions. But did you know how much work actually goes into making sure performing is all they have to think about?

After all, you can’t afford to worry about trivialities like having a stool to sit on between rounds when there’s someone trying their hardest to separate you from consciousness. Longtime fan Daming Deng was lucky enough to get exclusive fight week access for ONE FC: BATTLE OF LIONS in Singapore this past November, and needless to say, he was floored.

Wednesday, 5 November: Put a ring on it

4pm: I start off by being privy to something few outside of the organisation get to see – the Singapore Indoor Stadium being set up for the event. I’m met by Joshua, the Operations Manager, who leads me inside and as I enter, I pause to take in the scene before me.

Having been to several ONE FC events in this venue already, seeing the stadium in its current state of undress is rather surreal – the seats are empty, the lights are on and just the bare skeleton of what would soon become the main stage and ring take the place of the roaring spectacle I’m used to.

I decide to try and explore the area and photographing everything I see without getting in the way. Everyone’s so focused on what they’re doing, they don’t notice me anyway. The diligence and constant level of activity astounds me, because it’s like everyone always has something to do. I can’t even finish a sentence sometimes without getting distracted and trailing off… 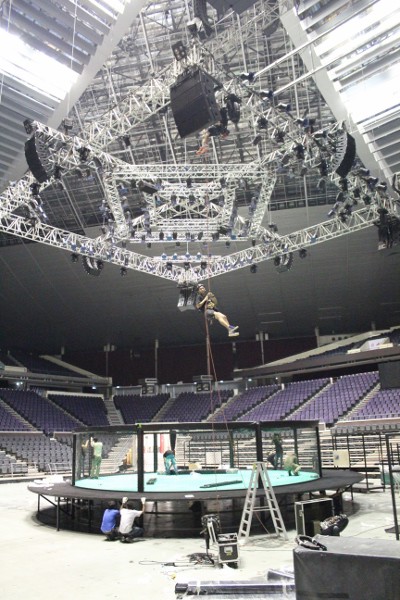 5pm: I spot Mohamed Rasuul, ONE FC’s Director of Facilities & Operations, who’s the best person to tell me how everything works around here. Essentially, he’s got teams working on everything from the cage to the red carpet, and his full staff numbering over 60 people have been hard at work since midnight the day before. What’s more, the only end they’ve got in sight is 4pm the next day, simply because that’s the deadline to get the venue ready.

His job is probably the most crucial, because he has to constantly check everything’s set up properly and in order at all times. Any mistakes would require extensive work to rectify. Can you imagine having to take the entire cage apart, just because it’s out of alignment? It’s like writing a 5,000-word article on a typewriter only to find there’s an error in the first paragraph, and correction fluid hasn’t been invented yet.

Rasuul then tells me he’s got a team working on the stage for weigh-ins the next day as well, at another venue, further emphasising how mind-blowing the scale of the job Rasuul and his team has.

Thursday, 6 November: Eye of the tiger

7pm: I make my way down to Bugis Junction to get a premier spot for weigh-ins. There’s a good mix of crowd, including locals, expats, students, families, and a handful of uncles and aunties around. Perhaps they are MMA enthusiasts as well?

8pm: I see the ONE FC Ring Girls; that explains the uncles. Then ONE FC debutante Kirstie Gannaway makes her way on stage to kick off the weigh-in session and the reason I’m there changes. Almost immediately though, I see her BJJ world champion boyfriend (also a ONE FC fighter) and the feeling fades. 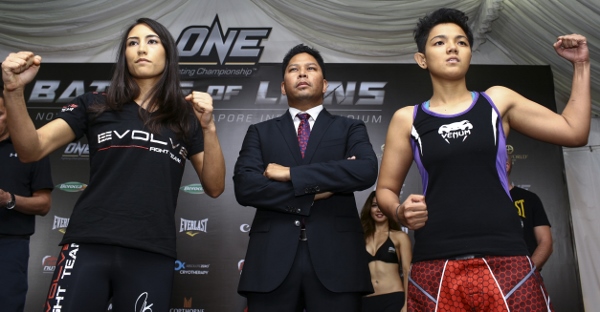 8.30pm: On to the serious stuff – the fighters are starting to weigh in. I wonder how many people actually know how difficult it is for these fighters to even go on stage and pose for pictures. They’ve basically been hard at work cutting weight for the past week, which is extremely taxing, both physically and mentally. They can’t afford to look weak either, since they’ll be facing off with their opponents right after. It’s as much a chance to intimidate each other as it is a photo opportunity, so they have to make the most of it, and despite the cheers and photos, the scenes on stage are intense.

9.15pm: Igor Svirid and Leandro Ataides, who fought for the inaugural ONE FC Middleweight Championship, hit the stage. They are absolutely enormous despite supposedly weighing just 83kg, and look to be in great shape. I silently vow to start training and exercising again. Maybe tomorrow. Since he trains in Singapore at Evolve MMA, Ataides understandably gets the lion’s share of audience support. It’s going to be a cracking atmosphere at fight night, that’s for sure. 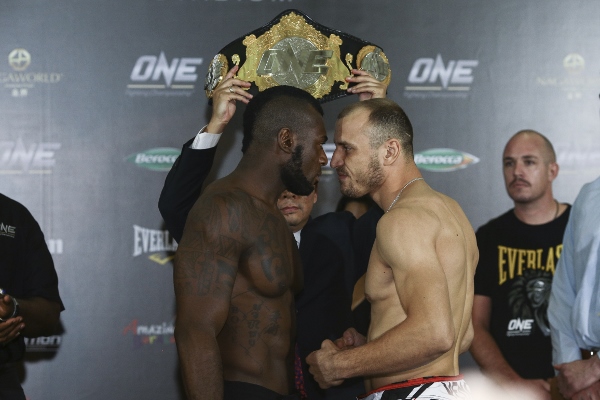 5pm: I head down to the Indoor Stadium early for the first ever ONE FC #InstaMeet, which involves an exclusive backstage tour of the event. While waiting for the tour to begin, I estimate the Instagram group has taken around 74 selfies already. I keep my opinions on this to myself.

5.15pm: Led by Jason Lim, Director of Online Media & Publications for ONE FC, we make our way into the stadium, and we walk past a life-size cardboard cutout of all of the organisation’s division champions. More selfies ensue. Now that everything is in its place, the arena is such a stark contrast to a mere 48 hours ago that I pause a moment to take it all in. 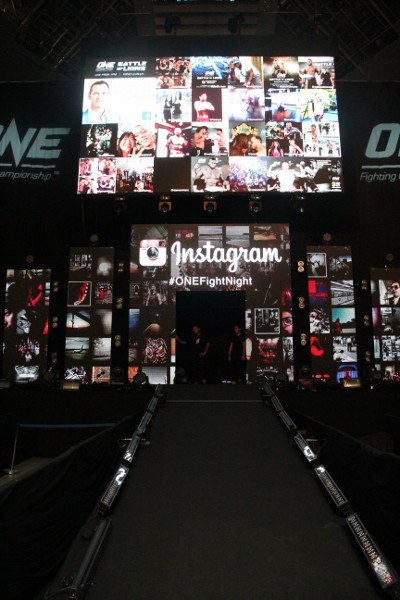 Apparently, I’m prone to repeat behaviour. People are looking at me strange for being visibly in awe, but they didn’t see what I saw on Wednesday. Seriously, putting something like this up takes immense resources and dedication, and my respect for Victor Cui and the rest of the ONE FC staff deepens.

Jason then brings a familiar face to meet us. It’s Rich “Ace” Franklin, former UFC Middleweight champion, and now Vice President of ONE FC. To me he needs no introduction, having watched him fight for years, but I wonder what the rest are thinking since he looks just like a regular guy when he’s not in the ring demolishing opponents. From what I remember, he used to be a school teacher, and he sure looks like one today, belying how dangerous he could be if he really wanted to. 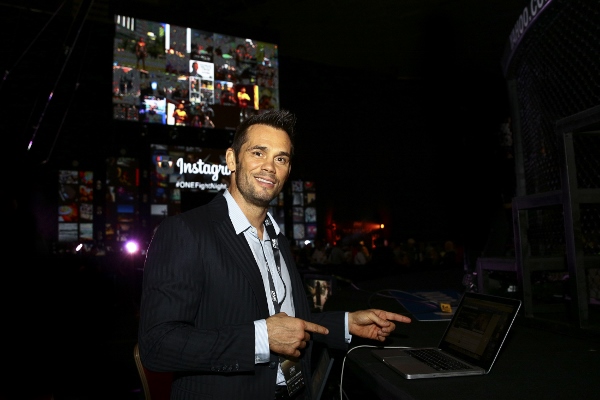 5.30pm: We get an unexpected treat – to be able to enter the room the blue corner’s fighters get ready in. You’d expect the atmosphere in there to be ultra intense, but on the contrary, the fighters all look quite relaxed despite the tension in the air. This is where the mental aspect of the game comes into play the most, because they have to remain focused while staying relaxed enough to deal with the pressure, and not seize up when the time comes to perform.

Upon leaving, we got to walk down the same ramp that fighters use to make their grand walkout entrance. I can’t help but feel goosebumps at this point, because it’s something only an elite few ever get to do for real in their lives. It’s not really a long walk, but it must feel like much more to someone going out there to lay it all on the line. I start to regret not training harder and sticking with it 10 years ago, then I remember I don’t like getting punched in the face. It was truly amazing being able to experience everything the fighters do every time they go out there: the walk down the corridor, the spotlights as we approach the main staircase, and the feeling of going out onto the main stage. It’s the most awesome thing I’ve felt in a long time, like a rebirth of sorts.

What followed next for me, was the main highlight of the entire experience: I got to enter the actual cage. As a fight fan, it was almost like setting foot on hallowed ground, so I give the moment the appropriate amount of reverence, trying to feel every step of the padded flooring as I walk around it. Everyone around me seems more interested in selfies, which is a word I’m really getting tired of typing. I resist the urge to try a double-leg on the people around me, and actually wish someone would take me down in there just so I can feel what it’s like. 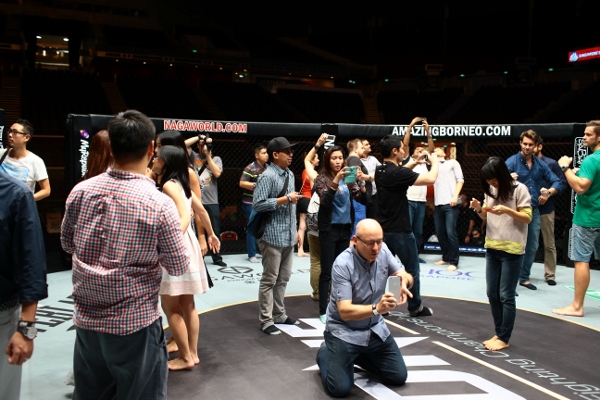 One thing that really struck me is how warm it is inside. Air-conditioning and heavy rain outside meant the outside was almost cold, but it’s almost an entirely different world once you’re in the spotlights. It must be extremely difficult to focus with all the bright lights and people shouting around you, so it’s really a wonder how the fighters do it, especially those making their debuts. Even standing there can feel almost overwhelming.

5.45pm: In closing, Victor Cui himself gives us a speech, and it’s plain to see the amount of passion he has in holding event after event like this. As everyone dispersed and started to go outside, I get to visit the red corner’s pre-fight room, which is an added bonus. 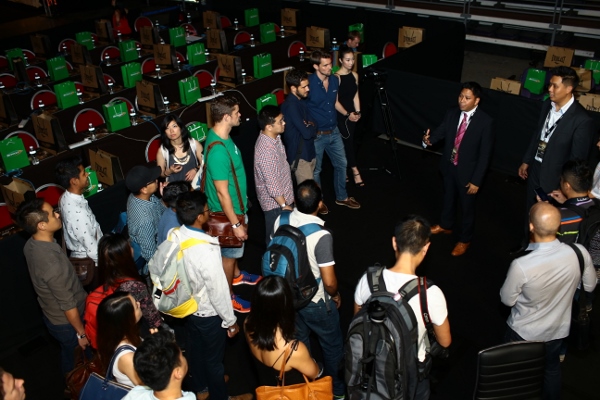 I reach just in time to see Jeff Huang getting his hands wrapped and this time I get to enter the training area to see the fighters up close, though I try to keep my distance so as not to break their concentration. I don’t want to annoy them, especially since they’re actively preparing for violence at the moment. Again, they’re surprisingly relaxed. Some even take naps, which makes sense seeing as they’ve got hours to go before it’s their turn to fight.

6pm: It’s an hour away, but I decide to sit down and reserve a good spot anyway. I plonk myself down in the first row of the media area, right next to the ramp the fighters use to walk in, and wait for the fights to begin. People are already streaming into the stadium, so I’m not the only overeager one.

7pm: It’s time for the fights, and as it begins, I marvel at how much actually goes on behind the scenes to make sure everything goes off without a hitch, and the unseen heroes that make it all possible. The sheer amount of staff ONE FC has on hand is insane – they have people handling every task imaginable. They’ve got a guy whose only job is to make sure there’s a stool for fighters to sit on between rounds. There’s someone to open the cage fence whenever necessary. There are people to get the fighters when it’s their turn to fight, and people to cue them when to walk out. And they all do it all with stoic professionalism and focus. Me, I can’t even write an article without going on Facebook every 20 minutes. 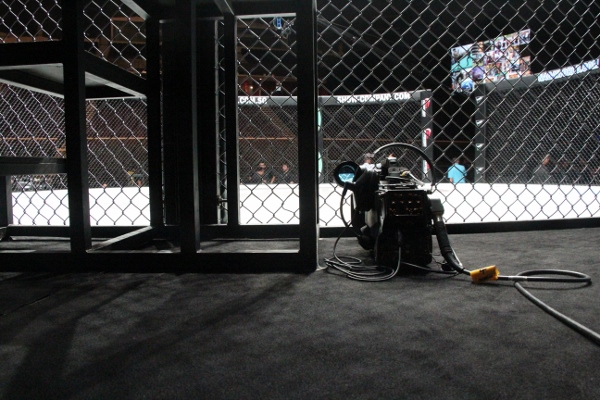 11pm: At the end of the night, out of the 10 fights there were nine finishes, with seven of them in the first round. ONE FC once again brought the Kallang Roar to the Indoor Stadium.