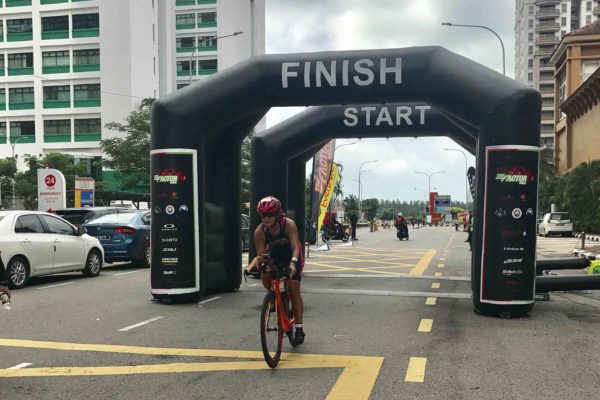 WHEWW! A different type of Sunday I had yesterday – 1st in age group (called Youth Open for 25-34 yo) and 2nd overall for Women at today’s 113-TriFactor Bike-Run-Bike Melaka!! 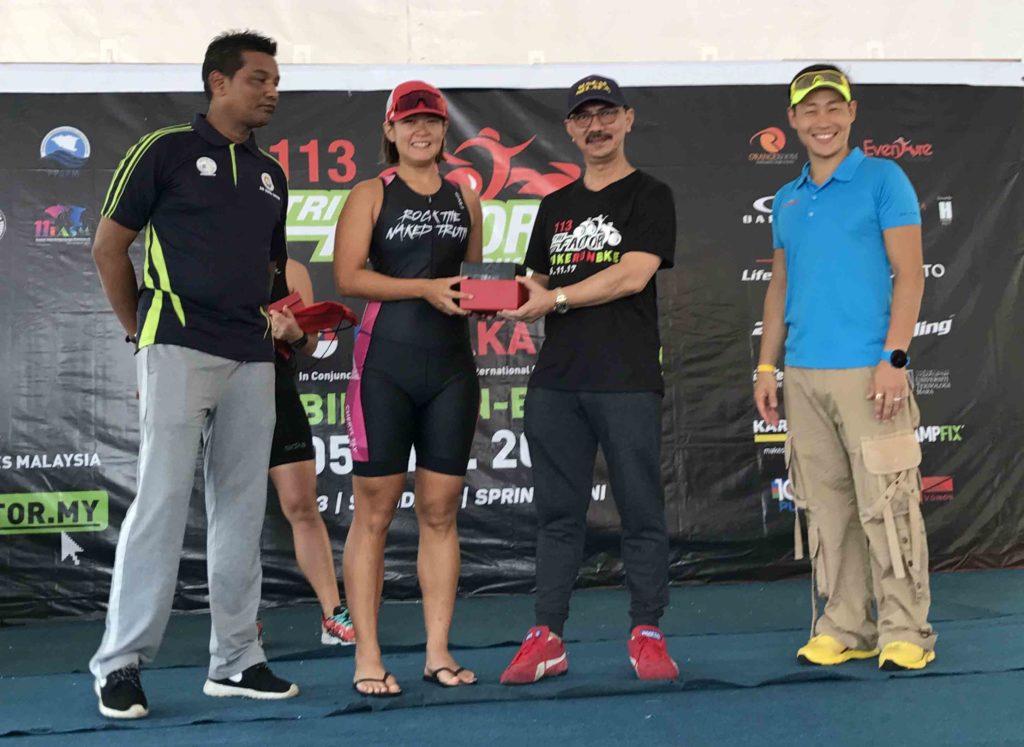 I’ve actually always wanted to try this bike-run-bike format. TriFactor has this format in Singapore (shorter distance though) but I’ve always had clashes with the dates, so when I heard of this I was like OKAY I WANT TO GO. Besides, Malacca isn’t too far away and all I have to do is load the car with the bike and drive in.

After the SCSM Women Squad training run in the morning, Connie and I cleaned ourselves up in the toilets of OUE Downtown Gallery (nowhere to shower and no time to go anywhere else to shower), dabao-ed food from The Autobus and immediately set of for the Tuas checkpoint. There was a compulsory race briefing at 3pm at the REPC and I was worried we couldn’t make it in time.

I was actually quite excited because this is the first time I’m driving to a race. I’ve gone for overseas races by plane and ferry, so this is something new. Malacca is about 250km away from Singapore, so it should take about 2.5 hours to drive BUT there is almost always a jam at the Malaysia customs that will delay you. True enough, we were stuck there for 1.5 hours and I totally forgot about the Touch ‘N’ Go (TAG) card so while Connie waited at the customs booth for me (other cars couldn’t be let through), I went to queue to purchase the TAG card. There was only one self-service kiosk and it was so slow that it finally hung and the group of technicians sitting there had to manually serve us (which took a lot faster tbh). Now I know why there was a jam lah.

The drive was straightforward and we tried not to stop too frequently because I wanted to reach the REPC by 3pm!! We eventually reached Mahkota Parade at 330pm and I managed to catch part of the briefing. Collected my race pack, went to take a look at where the transition area was, bought dinner and some essentials at the supermarket, checked into hotel then proceeded to prep everything for the race before turning in early!

It rained during the night and I woke up to raindrops beating against the window, oh shit. Looked out the window and saw that the rain was subsiding, so that’s good. By the time I got to the transition area to check in, the rain had already stopped but the roads were slightly damp. Ok, so long as there’s no more rainfall that’s fine. 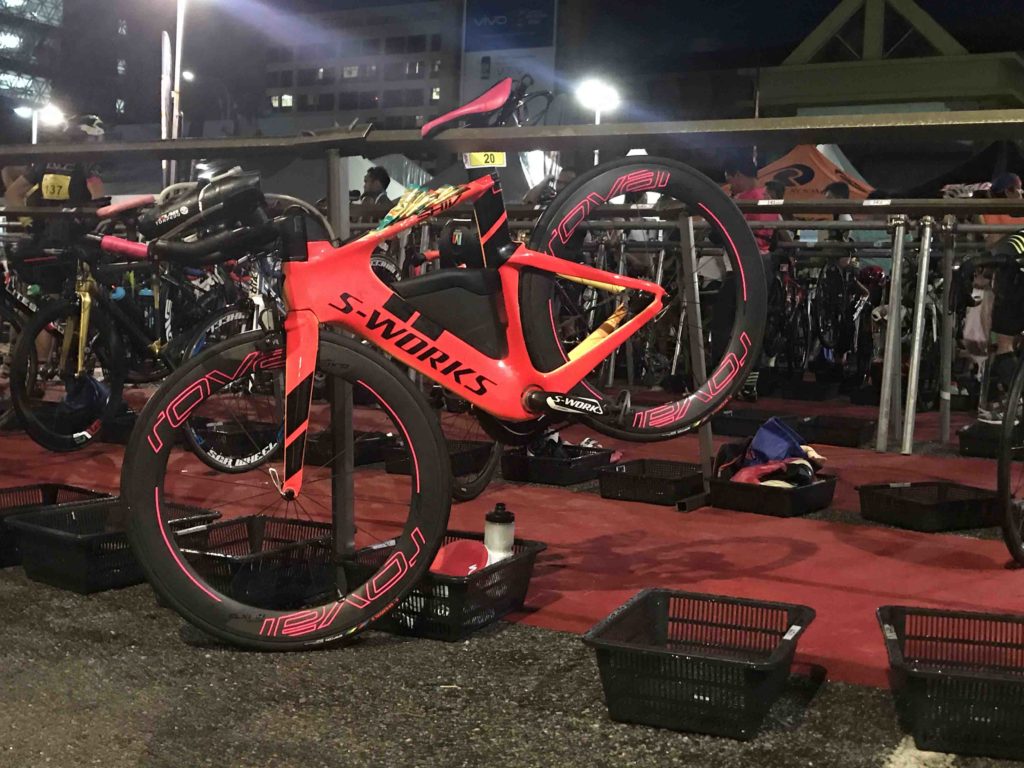 I went to prepare my stuff and then I stood outside the transition area to wait. (I only went to get my bike out when it was closer to the start time.) During this time, Queen Bitch II was a tourist attraction. I felt a sense of pride when people watched past her and turned back for a second glance. Some of them were also taking photos of the her! The funny thing is, when I was with QBII, people stopped to comment on her beauty and asked to take pics of her (WITHOUT ME). She’s a superstar in her own right and I was just her loyal servant LOL. 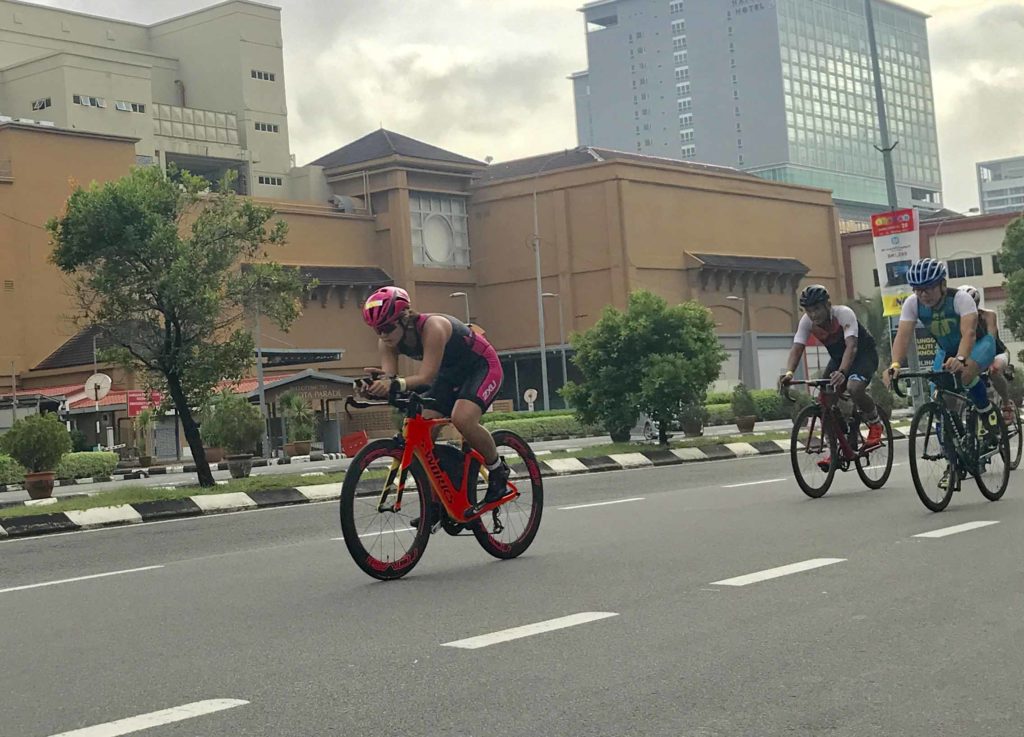 The race start was delayed about 25 minutes and I was getting a little sleepy, haha but once the horn went, it was game on. We did 3 loops of 20km first and it was pretty cool ‘cause the main road (both sides) was closed for us so there was a lot a lot of space. The 113 category I was in had a nondrafting rule but I saw many in groups!!! Anyway, there were a few bridges (which means slopes), but other than that it was mostly flat so lots of aero time. 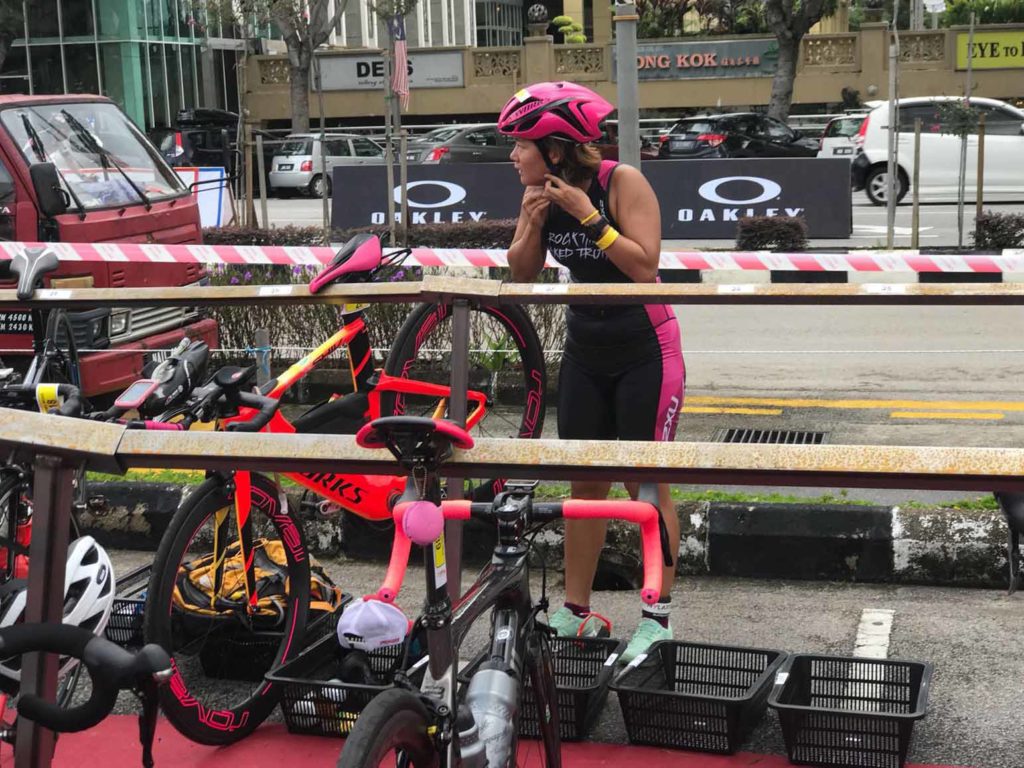 The first transition was what I’m used t0 – getting off the bike to run. The run route was a bit tight – for the first half of the run, we ran along the narrow paths of the river and I had to keep turning and twisting and going up/down steps. After that we ran into some small roads so it was ok. But then there was the large slope near the end of the route, wah lao! 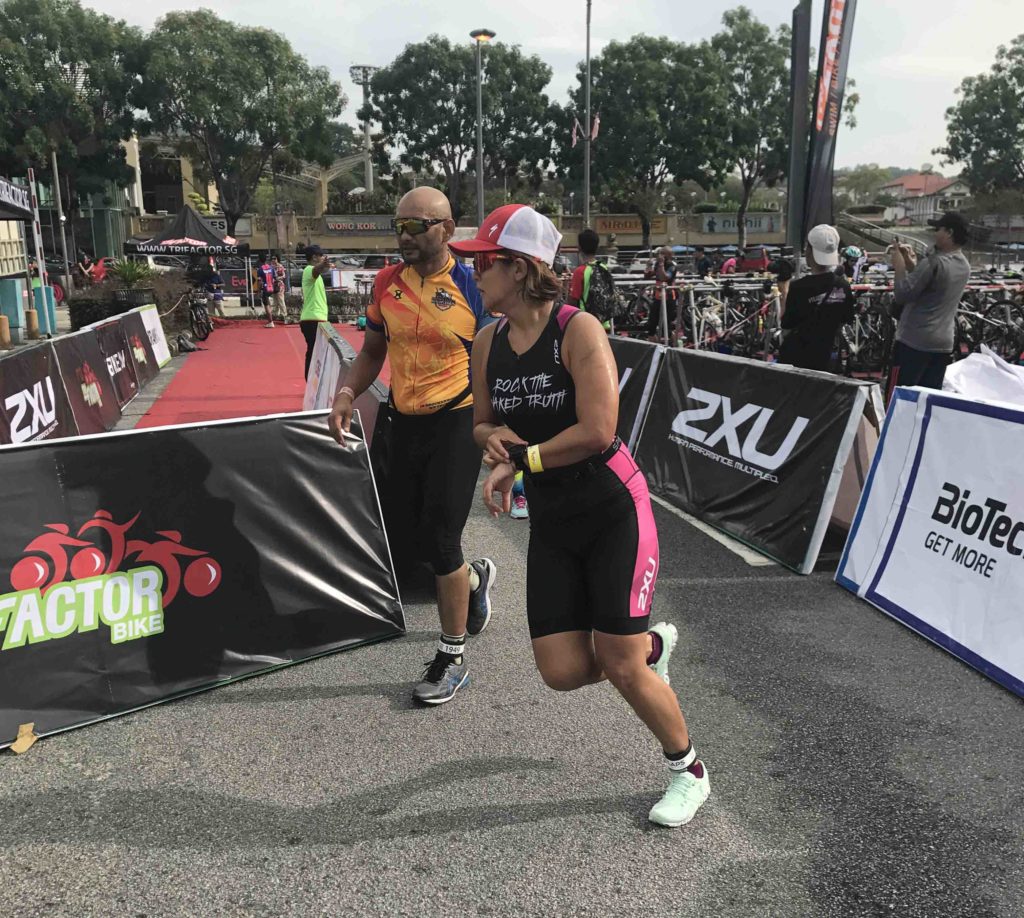 I got to transition and this time it was quite strange changing from run to bike, and I was hoping I didn’t forget anything. While on the run, this is the first time I’m cycling after a run and I didn’t know how it feels like, so I wasn’t sure how to pace. In the end, I just ran at a comfortable pace so I could save my legs some for the last bike leg. 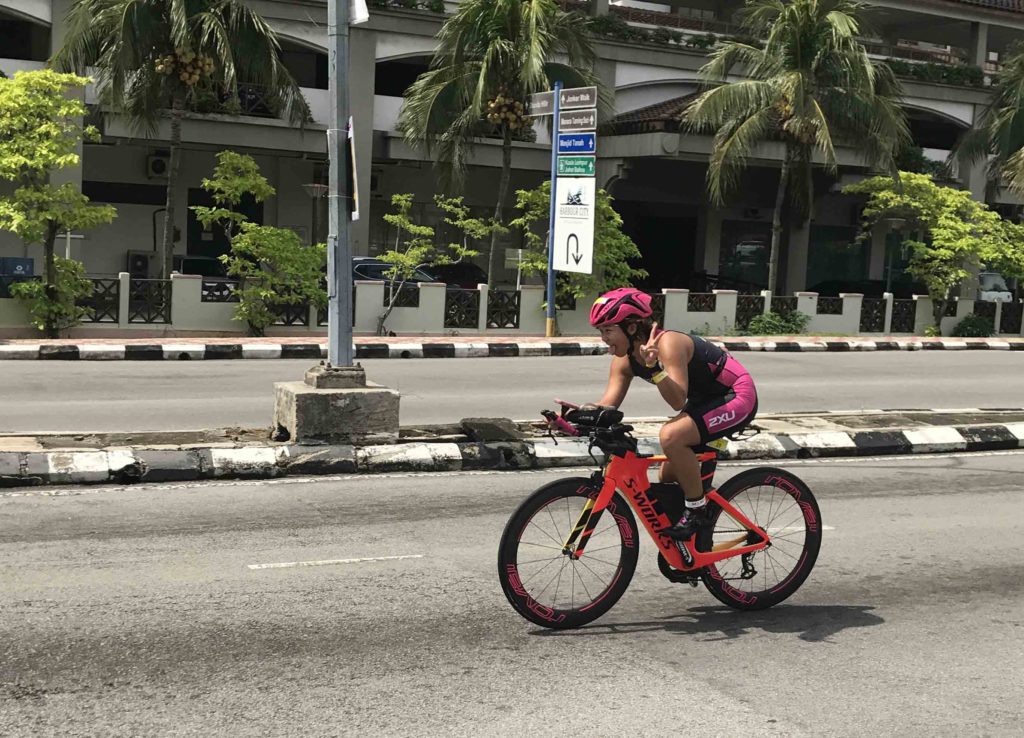 When I first got back on the bike, the legs felt a bit funny. Hahahahaha! Cycling after running hurts too, but after a while you get back into a rhythm and it’s fine. Nothing is more painful than running off the bike I feel! 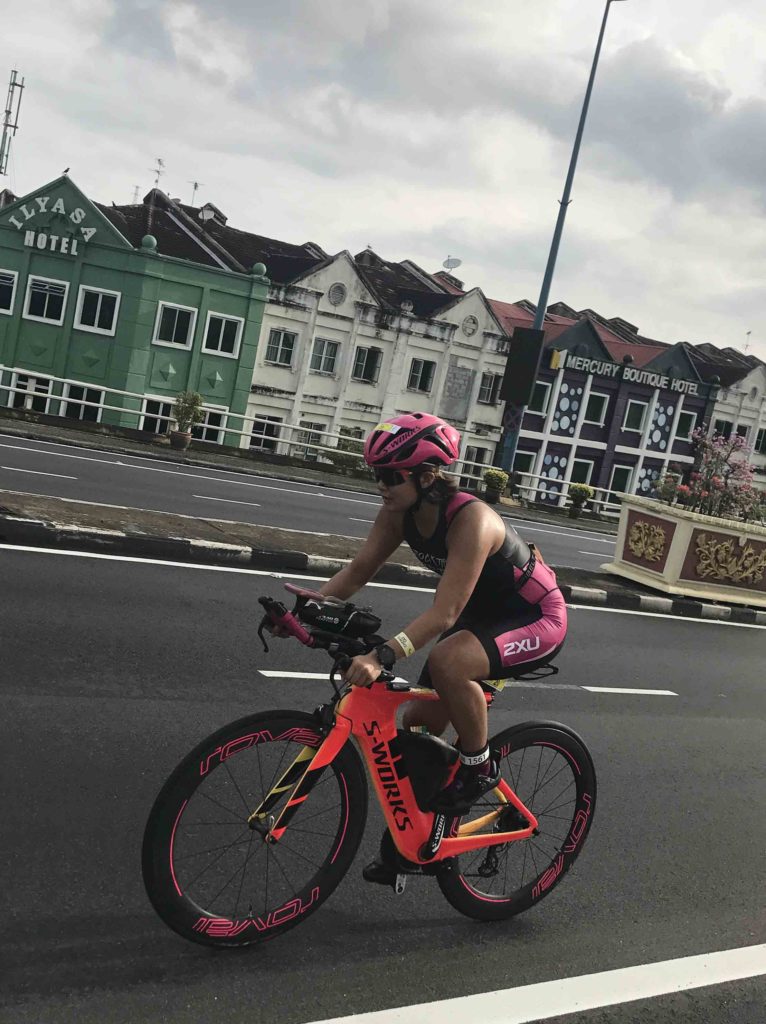 Fortunately the weather was overcast today so it was the most forgiving race I’ve ever had. I actually enjoyed the race and didn’t have any bad thoughts in my head. I didn’t even need to wear my shades much! Heng ah.

So, I’m grateful for another safe race and am getting excited for IM70.3 Phuket in exactly 3 weeks!

Thank you BFF Connie for being crazy and driving into Malaysia with me just for this. Best support crew ever xx 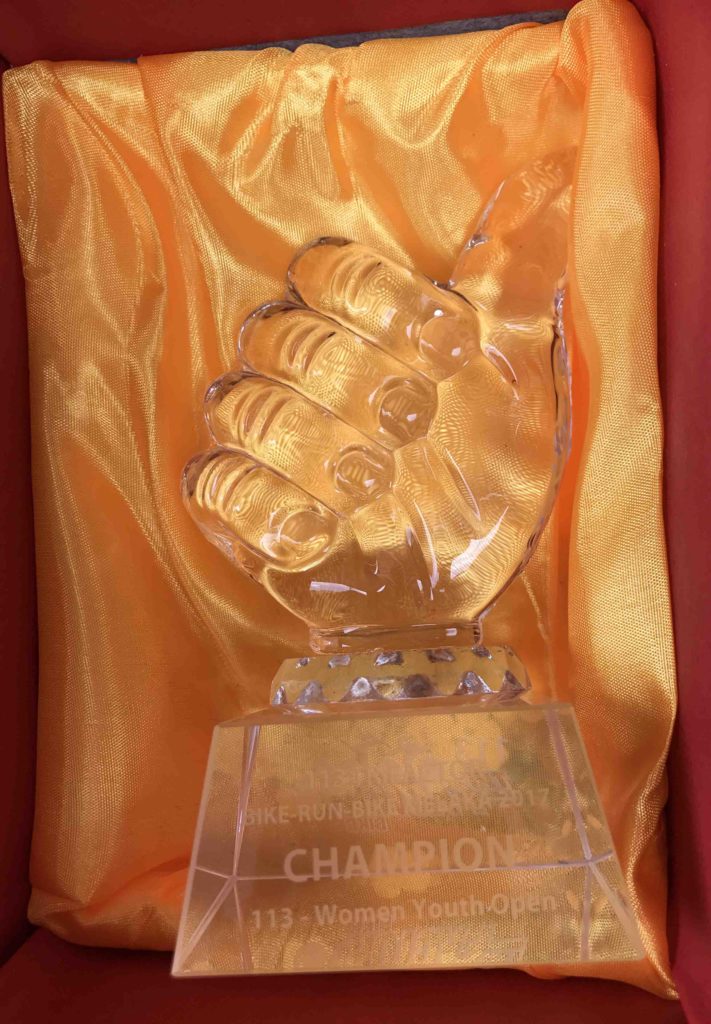