My sister got married! 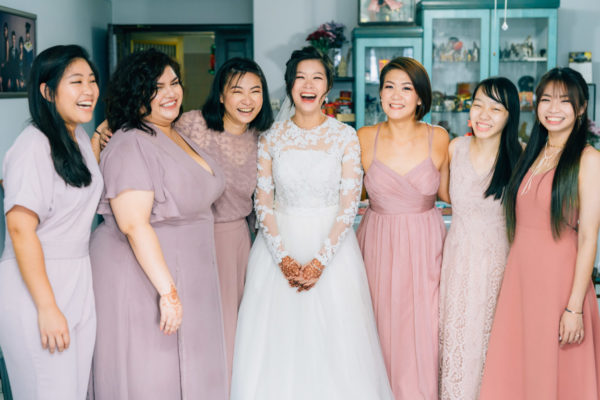 In one year, I had bridesmaid duty for two weddings – one for Carrie and the other as maid-of-honour for my (only) sister. I finally got around to going through all the photos of their wedding so I could write this. Looking at the situation this year, it was fortunate that they held their wedding last September!

Looking at how happy she is in these photos really makes me happy that she found the love of her life, aawww.

And also, because I am looking at these photos now, during the Circuit Breaker where I am home alone, it’s making me miss my parents!

I remember waking up at 3.30am, not to go out and cycle, but to get my makeup done at 4am because I needed to be at my parents’ place by 6am. When I got there, I worked on the finishing touches of my Powerpoint presentation for my maid-of-honour speech where I inserted (several) slightly embarrassing photos of Mei from her younger days LOL… with a McDonald’s McMuffin in hand and my usual judge-y face haha.

The important thing we did was prepare the 酸甜苦辣 for the groom’s gatecrash. Having had a little experience with Carrie’s wedding, I gleefully made the chilli one really spicy – which is what I did then as well haha.

In Chinese tradition, the groom must not open the car door when he arrives at the bride’s house. Instead, the car door is to be opened by a young boy. We don’t have any younger brothers or young cousins, so I got Oliver to help!

We kept the gate crash simple as Furqan only had one groomsman – poor guys. They were made to play charades with words of animals (because they met at the zoo) and omg I didn’t even know 90% of the animals. Super cheem names! If they failed to guess the word, they had to do a forfeit and eat something from the 酸甜苦辣 LOL.

HAHAH sorry I was damn extra standing there when he got to see his bride! I had to document it for Instagram y’know.

Before we left for the rest of the day’s proceedings, I asked Mei if she could walk under my pants. In Chinese/Cantonese tradition, the younger sibling has to walk under the pants of the elder sibling if he/she gets married first. Simply because the ‘proper sequence’ is that the elder ones should get married first, and also, so you don’t jinx the elder unmarried sibling. Thus, I hung a pair of lululemon shorts and Mei gamely walked under, just to entertain me lol!

We were running behind schedule but we managed to squeeze in a bit of time to get a quick shoot done at East Coast Park.

After that we rushed over to the hotel, Royal Plaza on Scotts, to get the Chinese tea ceremony done first. And yes Mei is in a Kebaya because my dad’s mum is Peranakan so we have a little bit of Nonya in us!

Another outfit change for the bride and groom and then it was time for the Nikah, which I think is the Muslim solemnisation. They sign a marriage contract in front of witnesses and all that.

Finally it was time for the lunch banquet proper. To make things easier, they had it buffet style.

Then came the part I was most excited about – my maid-of-honour speech!

I only have one sister and I am not proud to say, but I wasn’t the best sister at some points. Now I’m really glad that we are now closer than ever and I treasure our sister-ship A LOT!

Between us both, Mei is the more level-headed, rational and sensible one. I’m always the one getting into trouble, the more impulsive and hot-headed one. Also, I don’t really have the best judgment in men – hence I am the single one here hahahaha.

I’m a more emotional person compared to Mei and I teared up at some points, but I didn’t wanna ruin my makeup so I had to maintain!!